The UAE’s leading security, safety and fire protection exhibition gets ready for 20th anniversary event in Dubai on 21-23 January 2018. 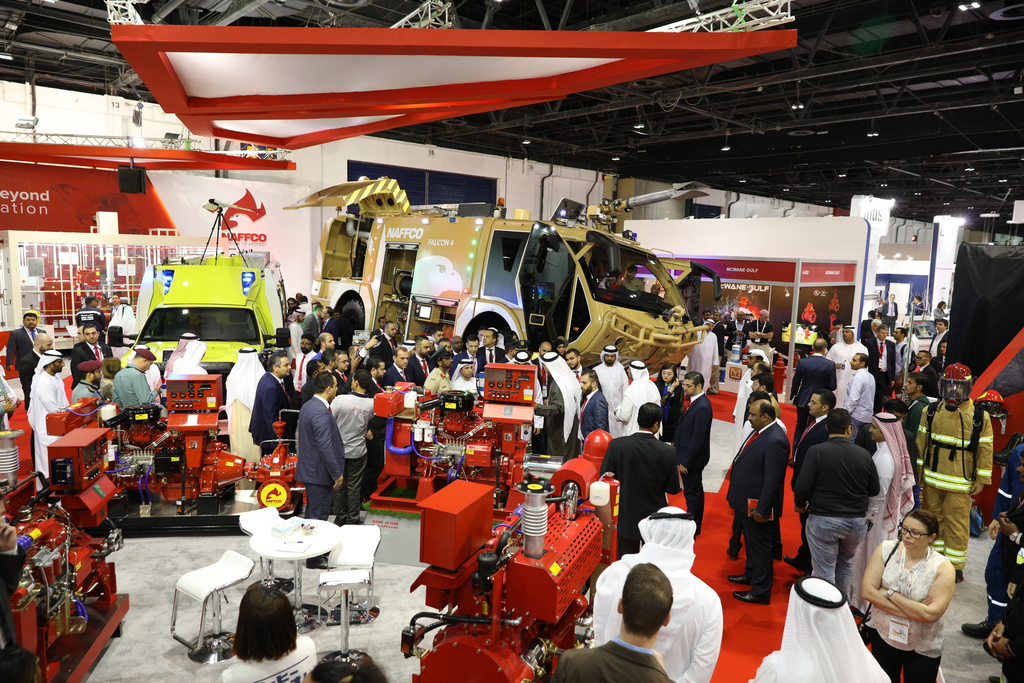 INTERSEC IS set to celebrate two decades of remarkable success when it opens doors in January 2018 in Dubai. The 20th anniversary edition will feature more than 1,300 exhibitors from 58 countries, while over 31,000 visitors from 128 countries are expected to attend as they seek the latest solutions across seven show sections of commercial security, fire and rescue, safety and health, homeland security and policing, perimeter and physical security, cyber security, and smart home and building automation.

Occupying 60,000sqm across 13 halls at the Dubai International Convention and Exhibition Centre with 10 per cent growth, Intersec 2018 has added a new Drones Pavilion and indoor Drone Zone, while a Wearable Security Pavilion will put the spotlight on advanced textiles including head-up displays, body cameras, embedded sensors, exo-skeleton communications and more.

From humble beginnings in 1999, when it featured 61 exhibitors from 13 countries, Intersec has developed into a global powerhouse, with 19 of the world’s top 20 security solutions providers among the 1,300-plus exhibitors on board in 2018.

The three-day event, which takes place from 21-23 January 2018, has grown in-line with many of the exhibitors that have been with the show from the beginning. NAFFCO is one of 13 exhibitors at Intersec 2018 that participated in the inaugural edition in 1999. Since then, the UAE-based company has established itself as one of the world’s leading suppliers of life and fire safety solutions, with a global network spanning over 100 countries.

Intersec’s impressive global presence over the last 20 years coincides with the Middle East region’s own rapid rise as a significant growth market for homeland and commercial security and fire protection.

According to analysts Frost & Sullivan (F&S), the Middle East homeland security market, comprising monitoring and surveillance systems, restricted entry systems and perimeter security solutions, is estimated to reach US$17.05 billion by 2021, growing at a compound annual growth rate (CAGR) of 15.6 percent between 2015 and 2021.

The commercial security market too has witnessed an upswing throughout the region creating opportunities for suppliers of video surveillance, access control and intrusion detection.  Valued at US$2.2 billion in 2016, the market is expected to grow at a CAGR (2016-2021) of 17 percent, reaching US$4.82 Billion by 2021, says F&S.  Meanwhile, the Middle East fire safety market is expected to be worth US$4.4 billion by 2021, growing at a CAGR of 12.4 percent between 2016 and 2021.

Fire and rescue is the next largest section with 400 exhibitors including NAFFCO, Fike, Honeywell, Hochiki, Oshkosh, and Siemens.  Safety and health and homeland security and policing (both with 100 exhibitors), and perimeter and physical security, cyber security, smart home and building automation (50 exhibitors each) wrap up the dedicated show sections.

Returning features include the Safety Design in Buildings Pavilion in the fire and rescue section, as well as an Outdoor Demonstration Zone of the latest fire rescue applications in action. Dubai’s Security Industry Regulatory Agency (SIRA) Forum will also headline a three-day conference programme, where it will provide the latest updates on Dubai’s Regulation of Security Industry Law, which governs the Emirate’s security industry framework, guidelines and expectations.

Intersec 2018 is held under the patronage of His Highness Sheikh Mansoor bin Mohammed bin Rashid Al Maktoum, and supported by the Dubai Police, Dubai Civil Defence, the Dubai Police Academy, and the Dubai Municipality.