COLIN TODD MBE, managing director at specialist fire safety consultancy C.S. Todd & Associates, is the proud recipient of the Margaret Law Award which, since its inception in 2018, has been bestowed on an annual basis by the Board of Directors at the Society of Fire Protection Engineers. 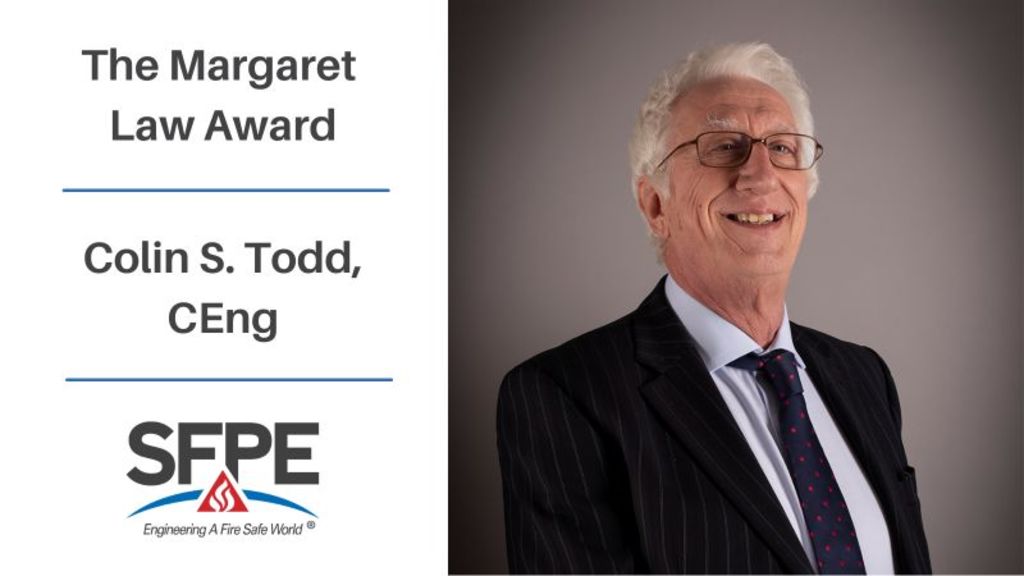 The Margaret Law Award recognises individuals who have pioneered advancements associated with fire safety engineering in the built environment. It’s named in honour of the outstanding achievements of Margaret Law MBE BSc CEng FIFireE FSFPE, a pioneering woman in the fields of fire safety science and fire protection engineering.

In addition, Todd delivers training courses for clients and undertakes public speaking. He serves on several British Standards Institution Technical Committees and is a Board member of the Fire Industry Association (FIA) and also chair of the latter’s Fire Risk Assessment Council.

Commenting on this accolade, Todd informed Fire Safety Matters: “I’m both surprised and delighted to receive this prestigious award named in honour of Margaret Law with whom I worked closely back in the 1990s in a professional industry body-focused capacity. Ultimately, that work led to the recognition of fire engineering as a profession and its recognition by The Engineering Council as such. Importantly, this development also realised the registration of fire engineers at the level of Chartered Engineer and other levels.”

Margaret Law was born in London and graduated from the University of London with a BSc (Honours) degree in Physics and Mathematics. She joined the Fire Research Station in the UK in 1952.

Over more than 20 years, Law established herself as one of the world’s leading fire scientists, carrying out research into many aspects of fire behaviour and its effects on building materials and structures alike. She also became involved in how these research results applied to the Building Regulations, Codes of Practice and design guides. Her research included studies of ignition and fire dynamics, heat radiation from fires, requirements for building separation and structural fire behaviour.

Law then spent some years in the Directorate of Research Requirements at the Department for the Environment, duly assessing research priorities in building and construction. The application of research to solve practical problems was of particular interest.

In 1974, Law joined the Ove Arup Partnership as an advisor on fire engineering for projects being designed by the company, subsequently creating innovative fire safety solutions for major projects such as the Pompidou Centre in Paris and the Kansai International Airport. Law’s concern was with all aspects of fire safety, particularly so in those buildings for which the standard rules and requirements of regulations did not apply directly.

Law always published and explained her work such that others could understand, question and implement it and was particularly renowned for her work on structural steelwork in fire, with the codified methods she devised still relied upon today in the UK, Europe and the US.

Law was a visiting researcher at the Science University of Tokyo in 1987 and was made visiting professor at the University of Greenwich a decade later. She was actively involved in national and international committees concerned with fire safety throughout her career, duly gaining acceptance for fire safety engineering principles within Codes of Practice and standards as well as the regulatory framework.

In the UK, Law was instrumental in developments that culminated in fire engineers achieving Chartered status through the Institution of Fire Engineers.

At the end of 1990, Law retired and became a consultant to the Ove Arup Partnership. Her book of papers was produced to honour her achievements when Law finished this consultancy role in 2002. Its contents are a testament to Law’s high standards, commitment to fundamental scientific understanding, technical rigour and an inherent ability to translate fundamental principles into practical building design solutions.