RESIDENTS LIVING in blocks of flats clad with aluminium composite material (ACM) gathered in the heart of east London at the weekend in a bid to urge the Government to protect them from the remediation costs now being realised in the wake of the Grenfell Tower tragedy that occurred in June 2017. 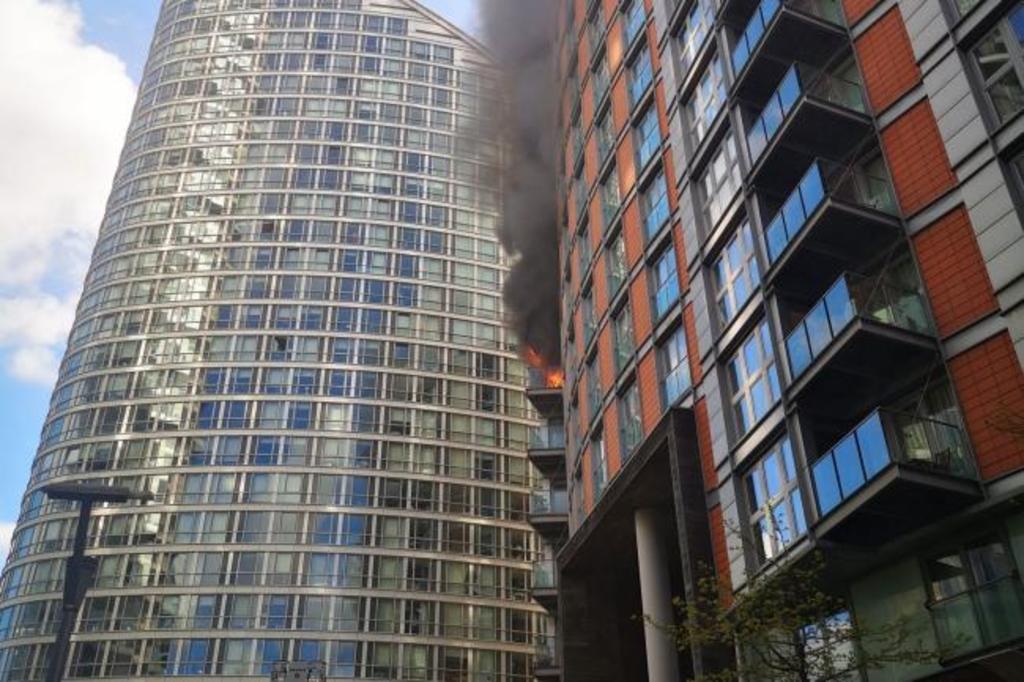 The protest took place on Saturday in the immediate wake of last Friday’s fire at the 19-storey New Providence Wharf development (pictured) on Fairmont Avenue near Canary Wharf, which features ACM polyethylene cladding panels on circa 22% of its façade.

Upwards of 120 firefighters and five fire engines from the London Fire Brigade tackled the blaze in Poplar which tore through three floors of the structure – the eighth, ninth and tenth floors, in fact – that plays host to 500-plus flats.

The London Fire Brigade was called to the location at 8.55 am. The first fire crew arrived within four minutes and the second crew within seven minutes, with an aerial appliance arriving on scene in under 20 minutes. Firefighters had to carry out 35 rescues, using fire escape hoods for 22 of those residents, while a further 18 individuals self-evacuated. One firefighter did sustain an injury and was necessarily treated at the scene.

In total, more than 40 people required treatment and two individuals were subsequently hospitalised as a result of the blaze.

According to The Telegraph, some residents said that they had to evacuate themselves from the burning building after fire alarms and a ‘Waking Watch’ system (whereby trained personnel patrol the floors and the exterior of a building for safety reasons) allegedly failed. Thankfully, the London Fire Brigade managed to bring the blaze under control at around 11.30 am. A video of the fire was published by the London Evening Standard.

Commenting on the incident, the London Fire Brigade’s Deputy Commissioner Richard Mills stated: “This was a very dynamic and challenging incident. Clearly, there will be some people who will be looking at this and linking it to the tragic events of the Grenfell Tower fire. Our thoughts remain with the families and residents of the Grenfell community. No doubt some very challenging memories may be brought back as a result of this latest incident. The London Fire Brigade continues to learn from every incident that it attends. We will now look at investigating this incident and determine the cause of the fire.”

Mills added: “We also recognise that there’s much more work to be done around how we provide our service to the community living in high-rise accommodation and we’re developing our procedures to improve those capabilities going forward. I would like to take this opportunity to thank my crews for the incredible amount of work they did to resolve this incident quickly, safely and effectively.”

Also commenting on the Poplar blaze, Fire Brigades Union general secretary Matt Wrack observed: “It’s extremely alarming to see another high-rise building in the heart of London light up in flames. A huge Thank You to the firefighters who responded and who had the fire under control so quickly. Our thoughts are with all of those affected.”

In a stinging attack on the Government, Wrack said: “It should shame this Government that, four years on from Grenfell, there are still people across the country living in buildings wrapped in flammable cladding. Time and time again we’ve warned that another Grenfell Tower could be just around the corner unless making people’s homes safe is a priority [for the politicians]. The pace of flammable cladding removal has been glacial and it’s putting people’s lives at risk. The Government must intervene and take quick and decisive action to end our building safety crisis once and for all.”

Grenfell Tower survivors and relatives’ group Grenfell United has also urged the Government to act faster to remove dangerous cladding from tower blocks. In a statement issued on Friday, the group asserted: “We are horrified by the news of the fire at the New Providence Wharf. When will the Government take this scandal seriously? Enough is enough. The Government promised to remove dangerous cladding by June 2020. It has completely failed its own target and, with every day that goes by, lives are being put at risk. More people have now lost their homes in another terrifying fire. The Government needs to treat this situation as an emergency and stop stonewalling residents who are raising concerns. No more games. No more excuses.”

Sadiq Khan, the Mayor of London, explained: “The spectre of the tragedy at Grenfell Tower still hangs over our city. Today, we have seen again why residents in buildings with flammable cladding are living in fear. It’s vital that central Government, developers, building owners and regional authorities work together to urgently remove such cladding from every affected building.”

According to the Ministry of Housing, Communities and Local Government (MHCLG), the building at New Providence Wharf has received £8 million in Government funding for the removal of unsafe ACM cladding. This work was set to commence on Monday 10 May, in fact.

The Government “has been in regular contact” with developer Ballymore over the last two years to make progress, including publicly naming the latter’s subsidiary Landor as “one of the companies that has consistently failed to take action”. Ministers have “met with Ballymore repeatedly” to urge such action.

The Government is spending £5 billion to fully fund the replacement of all unsafe cladding in the highest risk buildings. The MHCLG concluded: “It’s essential that building owners take swift action to remediate defective cladding and the Government will fund every eligible application. Workers are on-site at 95% of those buildings identified as having ACM cladding as at the beginning of 2020. We expect that work to be completed at pace in the coming months.”

In its own statement, Ballymore said: “Our thoughts are with everyone who has been affected by the fire at New Providence Wharf. The safety of our residents is paramount and we’re working closely with the London Fire Brigade. Our response team are on-site to support residents and assist with alternative accommodation where necessary.”

The statement continued: “The cause of the fire has yet to be determined and we will continue to work closely with the London Fire Brigade during its investigations. We can confirm that the ACM cladding on the building did not combust and played no part in causing or facilitating the fire. Enabling works to remove the ACM cladding have been underway for two weeks prior to this incident and will recommence as soon as possible.”

According to The Guardian, Ballymore told residents at New Providence Wharf that the cost of fixing the complex had risen to £11.6 million. As stated, the Government has said it will cover up to £8 million to remove ACM cladding at the development. The Guardian has also reported that Ballymore consistently stated it will only contribute £500,000 towards the cost of remediation, in turn leaving leaseholders with a bill for circa £3 million.

Placards brandished at Saturday’s protest in east London read “Enough is enough”. Protest organiser and campaigner Harry Scoffin informed London’s Evening Standard newspaper: “What we need is the Government to change its policy. People literally don’t have the money for these remediation works so we’re looking at mass bankruptcies unless there is some sort of last-minute intervention. That’s what this protest is all about. It’s really focused on bringing leaseholders together and keeping the pressure on the Government. If there’s a political will [for policy change] then it can be done.”