One of the beauties of reporting on new technologies is watching them develop. In May last year I was able to report the development of the Patriot One PATSCAN cognitive microwave radar enabled hidden threat detection capability. A bit of a mouthful but essentially it allowed a crowd to be surveilled discretely as it passed a certain point and anyone carrying a concealed gun or a knife or an explosive device would be identified. 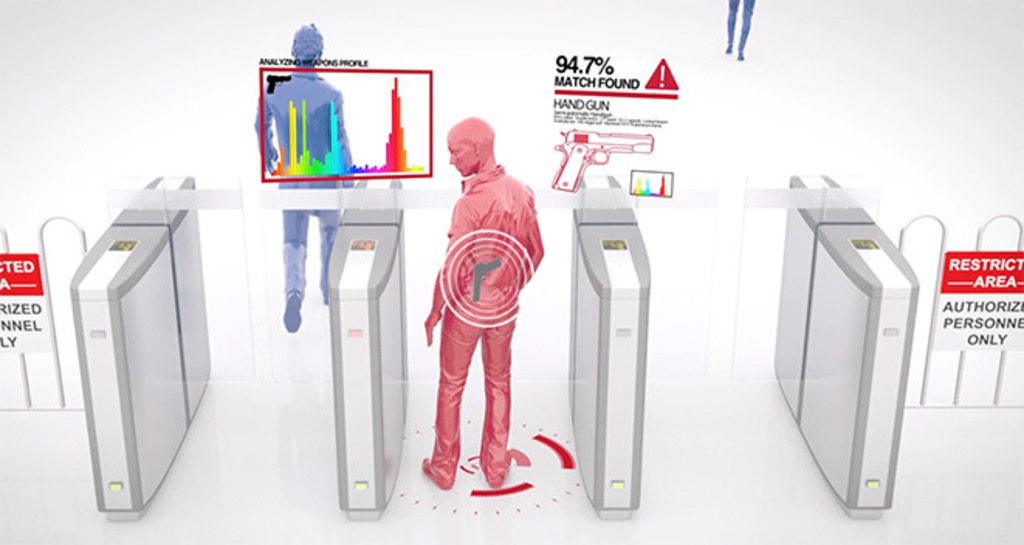 ‘Cognitive microwave radar’ is designed to identify concealed weapons in a discrete way and allow real time analysis of people entering any public space such as an office building, a stadium, a train station and tell if they’re carrying something they shouldn’t.

The core research behind it, came out of McMaster University in Ontario and was funded by the Canadian Federal Government and by NATO for seven years. Martin Cronin the CEO of Patriot One Technologies, who are taking the technology to market under the name PATSCAN, told Philip Ingram, “It is basically a type of low powered radar, pulsing a thousand times a second between 300 MHz and 4.8 GHz, but a whole lot less power than what comes off your cell phone.”

Timings couldn’t have been better as in February this year the Joint Security and Resilience Centre (JSaRC), part of the Home Office launched alongside the new £100 million Government strategy to tackle violent crime a project to explore, with a range of experts and professionals, whether there are new technologies, innovations and approaches that can support the prevention of knife crime and detection of other smaller offensive weapons.

The Patriot One PATSCAN CMR covert weapons detection system was almost built for this task. This technology will allow the discreet screening of large numbers of people and individuals to be selectively targeted for search if the system alarms.

Explaining how the alarming process works Martin Cronin says. “What low powered radar signals do is cause conceal objects to resonate with a distinct signature based on the material composition. That signature is compared to a database of ‘classifieds’ that we have and are continuing to develop.  The classifieds are for bladed weapons, hand guns or long rifles, or explosive devices.”

However, the PATSCAN CMR capability is just one sensor in a suite describes as the PATSCAN Multi-Sensor Covert Threat Detection Platform.  The other sensors include an AI enabled video surveillance solution that leverages feed from existing camera systems and uses the feed to monitor suspicious behaviour automatically sending alerts when appropriate.

Providing the ‘icing on the cake’ for detection is the PATSCAN STS multi-chemical threat detection sensor that can ‘sniff’ out volatile organic compounds such as those in some chemical warfare agents, explosives and other substances you wouldn’t normally associate with normal activity.

Putting all three systems together gives a layered multi-system, multi-threat stand-off discreet security system that is just quietly operating in the background.  Development has not been without its challenges. Martin said, “there have been massive real-world technical challenges with so many variables to be factored in. Essentially, it’s all about two things, background subtraction and feature extractions. We are teaching the system all the stuff we’re not interested in and so that’s all different body shapes, all different clothing, types of bags, cell phones, tablet computers, prosthetic limbs; teaching the algorithms that these are all things that we have no interest in and then feature extraction is the stuff we are interested in.”  It is clear why AI is key to this new and developing technological capability.

Martin Cronin summed up when he described the PATSCAN suite as, “ a tool designed to live within a broader security architecture and is all about pushing the security parameter out further and have early warning of a potential threat.”

Given what I have seen develop in just over a year Patriot One, who by the way will be at this year’s International Security Expo at Olympia on 3 and 4 December 2019, probably have a few other tricks up their sleeves.