THE SECURITY Industry Authority (SIA) have partnered with Police Scotland in support of their new Hate Crime campaign, which is focusing on workers in Scotland's night time economy in an effort to encourage more victims of hate crime to come forward. 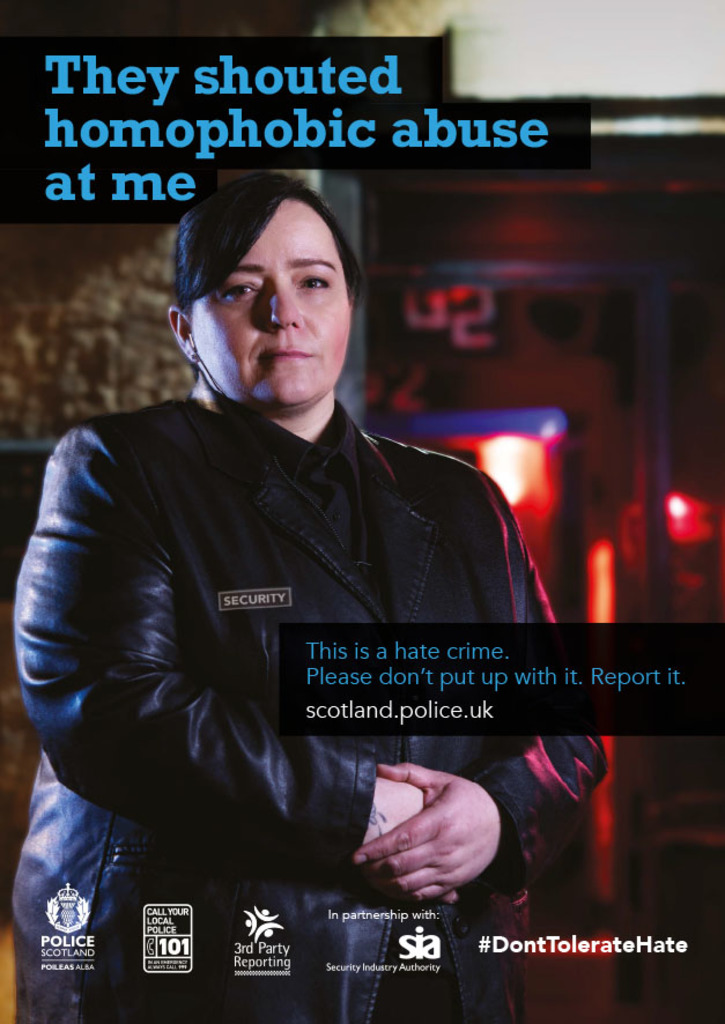 POLICE SCOTLAND are launching a door supervisor poster as part of their campaign, which runs until 10 March 2019. The poster, which bears the SIA logo, targets homophobic abuse. Other elements of the campaign feature taxi drivers, and workers at fast food outlets and convenience stores.

Feedback from police officers and partners shows that workers in these late-night industries are most at risk of experiencing hate crime.  The Police Scotland campaign is aiming to raise awareness of the issue and ensure that night-time workers - as well as the wider public - report these crimes.

Ed Bateman, the SIA's Director of Partnerships and Interventions, said, "We're very happy to support this initiative by Police Scotland. Door Supervisors do a difficult job, often in trying circumstances, and many of them find themselves the target of unacceptable abuse.  If you have been targeted because of your disability, race, religion, sexual orientation or transgender identity, or you are aware of someone else being targeted, we want you to report it."

Over 6,700 hate crimes were recorded in Scotland in 2017/18 and 66 per cent involved people being targeted because of their race. Sixteen per cent had a sexual orientation aggravator and seven per cent a religion aggravator.

Chief Superintendent John McKenzie, Police Scotland's head of Safer Communities, said, "Hate crime can have a devastating impact upon victims, their families and wider communities. It can leave victims feeling isolated and fearful of what might happen next. It's important people know they can report it and how to report it.  We work with partners including the Scottish Government to raise awareness and encourage the reporting of hate crime.

If victims don't feel comfortable reporting the matter directly to police they can report to Third Party Reporting Centres, which have staff who can identify hate crimes and offer support to victims."

The Safer Communities department within Police Scotland has a scheme in which officers across the country can be hate crime champions. This means they are trained to provide advice and support around hate crime to other police officers and police staff.

Other key partners in this year's campaign include the Scottish Grocers Federation, Just Eat, and Scottish License Trade News.

Graham Corfield, managing director of Just Eat UK, said, "We work with over 30,000 restaurants in the UK.  We want to play our part in helping restaurant owners and employees alike to feel safe when they are at work. Giving people the confidence to report hate crimes is hugely important, and we're pleased to be supporting this important campaign."