A MUM from Widnes is warning other families to be vigilant after a fire involving a popular electronic toy put her children’s lives in danger. 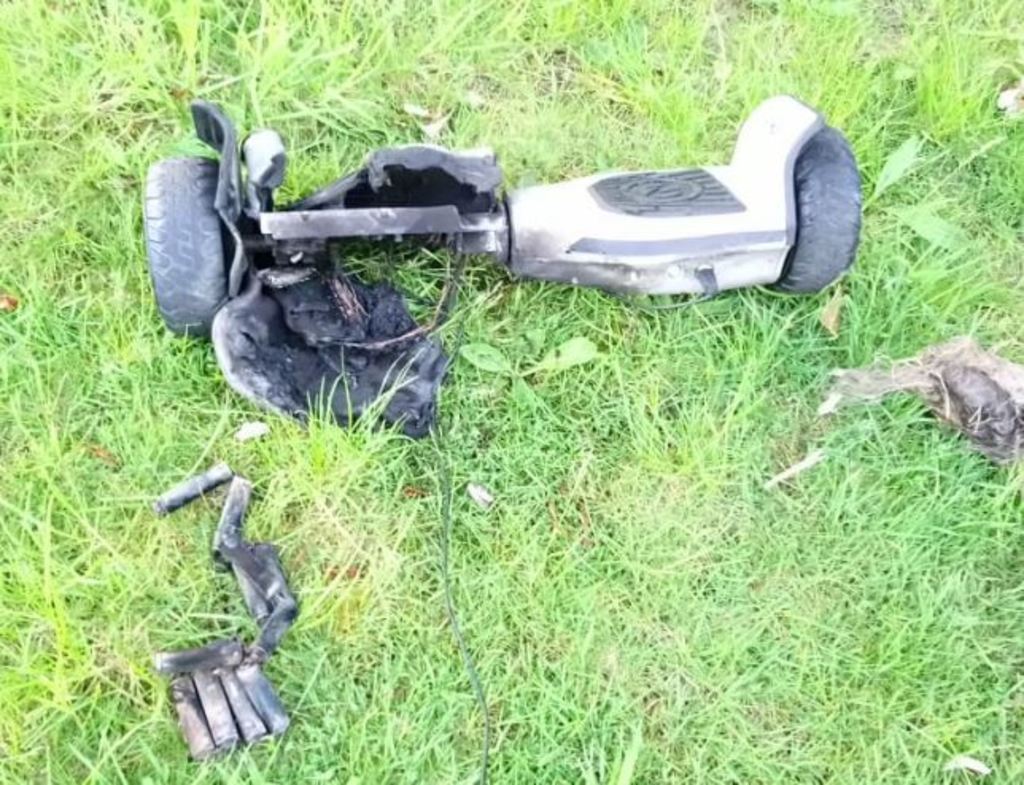 Shortly after 8pm on Monday 13 May a two-wheeled self-balancing electronic scooter, which are commonly known as hoverboards, exploded as it was being charged in the living room of the family’s home in Masefield Avenue.

Five children, aged between five and 10, were all asleep upstairs at the time.

Thankfully dad Robert Jones, 33, was awake and heard the hoverboard crackling and then saw it explode as he went into the living room to investigate.

The explosion activated the smoke alarms in the house and also alerted neighbours to the resulting fire.

The neighbours helped Robert wake up the children and carry them outside to safety.

The family correctly followed Cheshire Fire and Rescue Service’s advice of getting out, staying out and calling the fire service out.

Firefighters from Widnes and Penketh isolated the gas and electricity supplies to the house and extinguished the fire before it could spread beyond the living room.

The crews also cleared smoke from the house with a large fan and assessed the family and the neighbours to see if they were suffering from the effects of smoke inhalation.

Mum Claire Bevan, 30, said: “I was not at home at the time of the fire. I returned to find fire engines outside my home and that my sleeping children had been rescued by my partner Robert and neighbours.

“As a family we are aware of the possibility of hoverboards being charged causing a fire.

“We bought it from a reputable retailer and it was only left charging for 20 minutes.

“It just goes to show that frightening things you read about in the news can happen to you.

“The incident has left the whole family extremely shaken up and emotionally scarred. I am struggling to sleep at night following the fire, as are the children. They used to be in a routine of being in bed by 7pm every night and going straight to sleep, but now they are often still awake past 10pm.

“But the incident could have been far worse. We would never have left the hoverboard charging whilst we went to bed as we are aware of the dangers of doing that. I dread to think what the consequences could have been if we weren’t so knowledgeable about hoverboards and if the fire had started later at night.

“A charging hoverboard exploding like that could have killed another family, especially if they didn’t have smoke alarms.

“I urge other families to never leave a hoverboard unattended whilst it is charging.”

An investigation has been carried out to establish the cause of the fire.

It is believed to have been caused by an electrical fault.

Widnes Fire Station Manager Stuart Devereux said: “Hoverboards have become extremely popular among children in recent years and there have been instances of the electric scooters hitting the headlines nationally and internationally for causing fires.

“There are three main causes of fires involving lithium ion batteries such as those used in hoverboards: the wrong charger being used, mechanical damage to the battery and a manufacturing defect.

“The lithium ion batteries used in hoverboards and other rechargeable items contain chemicals which are flammable.

In the event of a short circuit or an over-charge situation, they can heat up very quickly and burst into flames. The resulting fire, although relatively small, can be very intense and will produce dense smoke.”

Hoverboards do not have handles. Riders balance on the platform and are propelled by two wheels.

Anyone planning to buy a hoverboard or other rechargeable electrical devices such as laptops, e-cigarettes and mobile phones is urged to:

Anyone with a hoverboard in their home should follow this safety advice:

Station Manager Devereux added: “Incidents like this emphasise the importance of having a working smoking alarm on every floor of your home and having an effective plan of action to escape should a fire ever start in your property.”