On Wednesday 3 March from 10.30 am until 11.30 am, Fire Safety Matters ran the latest instalment of the magazine’s ever-popular webinar series, this time around focusing on ‘Protecting High-Rise Residential Buildings from Fire’. Brian Sims reviews the key discussion points that emerged 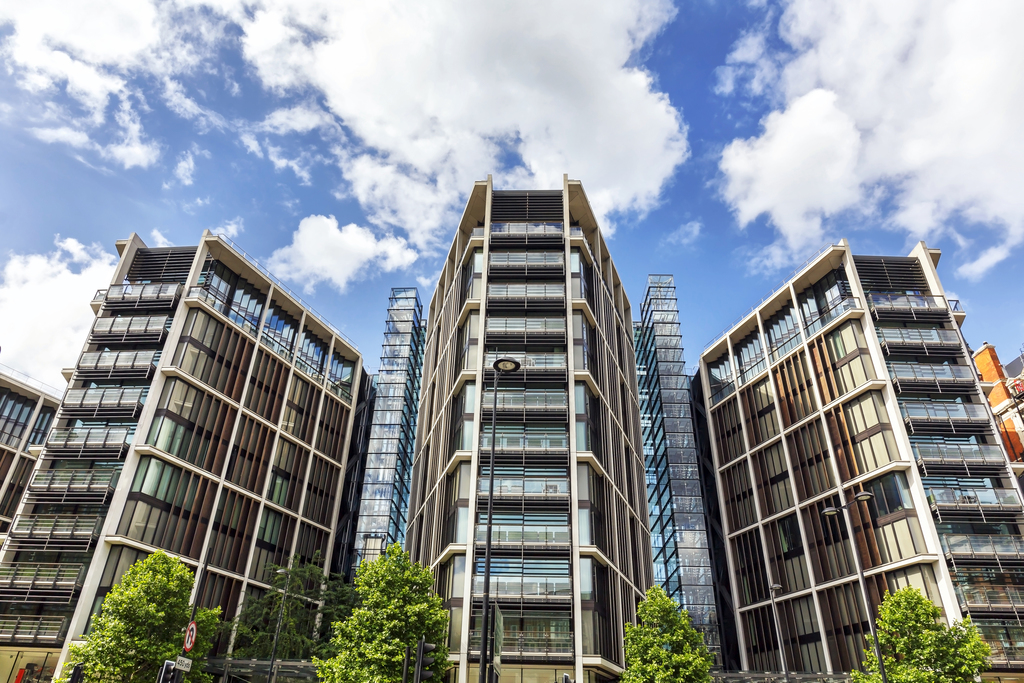 FOR THOSE high-rise residential buildings (HRRBs) still fitted with flammable cladding, the National Fire Chiefs’ Council (NFCC) currently recommends a change in evacuation strategy supported by the introduction of temporary protection measures such as ‘Waking Watch’ or a fire detection system until such time that the potentially dangerous cladding is removed.

If the remedial works initiated by the Government in the wake of the Grenfell Tower tragedy are expected to take longer than 12 months, the NFCC strongly recommends the installation of a fire alarm system as a more reliable, safer and more cost-effective solution to a ‘Waking Watch’ regime.

Those observations from the NFCC served as the backdrop to Fire Safety Matters’ latest webinar. Sponsored by Apollo Fire Detectors, the digital broadcast featured excellent presentations by Salvy Vittozzi (regional sales manager for London and the South East at Apollo Fire Detectors and a system designer armed with over 20 years’ experience in the fire sector) and Russ Timpson CEng BEng (Hons) FIFireE MBCI (managing director of the Tall Building Fire Safety Network). Chaired by Mark Sennett (CEO of Western Business Media), the webinar enjoyed over 1,800 pre-registrations with 950 readers of Fire Safety Matters attending live and asking no fewer than 175 questions.

Kick-starting the proceedings, Vittozzi examined the ‘Stay Put’ policy, the drivers for change, why we’re moving towards simultaneous evacuation and what happens next after a building has been made safe. Timpson then assessed in detail why evacuation strategies should be changed, how to implement the change process itself, pre-planning for change and the various considerations involved (including the new Building Safety Bill).

The ‘Stay Put’ policy was developed in the UK back in the early 1960s to ensure fire safety in HRRBs and relies on each flat in a given building acting as an individual compartment containing any fire that might arise for between 30 minutes and one hour. Only affected residents are required to evacuate. Compartmentation should ensure all other remaining residents are secure in their own flats while the Fire and Rescue Service attends to the blaze. The ‘Stay Put’ policy is still adopted in today’s new build structures such that escape paths are left free for use by firefighters.

The Grenfell Tower disaster on 14 June 2017 realised 72 people losing their lives. Hundreds of families were displaced. Back in 2005, the Harrow Court tower block in Stevenage caught fire on the fourteenth floor with the blaze spreading to all floors above. No residents perished, but two firefighters did.

In July 2009, Lakanal House (a 14-storey structure containing 96 flats) experienced a devastating fire. Six people died. “The ‘Stay Put’ policy was in place,” said Vittozzi. “Due to issues with compartmentation, though, fire and smoke was able to spread.”

Vittozzi went on to outline that there have been over 300 fires in flats since Grenfell. Most of them minor in nature, but others – like that at The Cube in Bolton in November 2019 – not so. On that occasion, over 200 people were led to safety. Questions arose over the cladding and compartmentation.

Subsequent to Grenfell, Dame Judith Hackitt’s fire safety review report highlighted ignorance around regulations and guidelines, indifference in the construction sector (with the primary motivation seemingly being to build as quickly and as cheaply as possible), a lack of clarity on roles and responsibilities and inadequate regulatory oversight and enforcement tools. All of which has led to a race to the bottom.

“When it comes to simultaneous evacuation,” continued Vittozzi, “all residents are expected to evacuate when a fire has been detected. The NFCC recommends either a 24/7 ‘Waking Watch’ patrol, a common fire detection and alarm system or a combination of both. Measures should be determined by the ‘Responsible Person’ based on a thorough fire risk assessment. It’s all about locating, alerting and assisting residents.”

Vittozzi mentioned that ‘Waking Watch’ has been given a bad name in the national press of late. “It’s quick and easy to organise, but unregulated. There are high and ongoing monthly costs attached to it until remediation work on buildings is finished, while such a solution was never designed for long-term use.”

Government figures suggest the average cost of a ‘Waking Watch’ per month in England is £179 per tenant (or £499 per tenant in London). 246 buildings (excluding those under 17.7 metres high) still have flammable ACM cladding attached. The estimated cladding replacement cost is £15 billion.

“We’ve seen the advent of the £4.5 billion Building Safety Fund and, more recently, the £30 million ‘Waking Watch’ Relief Fund,” said Vittozzi. “The latter is to remove the ‘Waking Watch’ in favour of a fire detection and alarm solution if the evacuation strategy allows this.”

In terms of fire detection and alarm systems, the NFCC recommends heat detection in all areas affected by compartmentation issues, while the stipulated sound levels for the alarm system should be 85 dbA at the bedroom door frame with the door open.

Assuming the unsafe cladding has gone and compartmentation is back to normal, what are the available options? “There are three. Return to a ‘Stay Put’ policy or modify to an evacuation alert system (ie BS 8629). Firefighters can alert each individual flat, floor and or area. The third option is to modify to a full fire detection and alarm system. Whichever option is chosen, ongoing risk assessments should be conducted to identify any new potential issues.”

Vittozzi, who believes that upgrading to a full fire detection and alarm system will be the least popular option, concluded: “You can use the temporary system and upgrade if necessary. You can go from BS 5839 Part 6 LD2 Grade D1 or D2 to a BS 5839 Part 6 LD1 Grade A system. Consideration should be given to communal areas like gyms, plant rooms and car parks. The EACIE system must be wired separately to the fire detection and alarm system.”

“For many years,” began Russ Timpson, “the fire safety establishment has been saying that high rise doesn’t mean high risk, but now we’re talking about high-risk buildings being those over 18 metres so clearly that position has changed. Therefore, it’s timely for us to reconsider some of our underpinning principles for construction.”

Timpson views tall building fire safety from an international perspective. “Many tall building fires have occurred worldwide over the last 20 to 30 years. To say that Grenfell was unprecedented is inaccurate. In short, there have been warning signals about tall buildings and the practice of putting combustible materials on their exterior.”

He cited three examples. The Lacrosse fire in Melbourne in 2014. A fully-sprinklered building with two sets of emergency stairs (not typical in the UK for residential structures). A successful evacuation was enacted. Then the Address Hotel fire in Dubai in 2015. A top-of-the-range construction with every fire safety feature imaginable. There was a full height burn and the sprinkler system became overwhelmed. “In my view the passive fire protection measures installed saved the building,” stated Timpson. “Multiple sets of stairs enabled a successful evacuation.”

Then there was Grenfell Tower. No sprinklers were fitted. Some considerable time was taken to change the evacuation strategy. Just shy of two hours, in fact. One set of emergency stairs and no building-wide alarm system. “We must reflect on the need to change fire strategies during a fire,” said Timpson.

Evacuation strategies must be changed when the fire risk assessment reveals major design/construction failures. Also, there may have been a major change to the building structure, geometry or occupant profile or a fire occurs that doesn’t conform to the design fires the original strategy was based upon. “You also need to consider human behaviour,” urged Timpson. “Will people remain in their flat if they see blue lights, mayhem, smoke and fire? Probably not.”

Of course, there may be really poor fire stopping. “Personally, I think the latter is endemic across the country,” commented Timpson. “We simply must turn around this super tanker of poor practice if we’re going to have genuine faith in passive fire barriers across the country.”

He added: “The ASFP is doing a fantastic job in trying to bring in higher standards. Setting a ‘Stay Put’ policy against a backdrop of poor compartmentation means that we have to question such a policy’s validity in some cases. ‘Stay Put’ does not mean ‘do not evacuate’. We must look at this issue through the lens of building resilience and not just life safety.”

This is a major challenge for Fire and Rescue Services in terms of command processes. “The Kent Fire and Rescue Service has been a leader here, focusing on ‘Rescues, Intervention, Containment, Evacuation’ or RICE. If the incident commander decides to implement this and change the building’s evacuation strategy to simultaneous, they should communicate that fact to all personnel and send a HIRE (High-rise Immediate Residential Evacuation) message to the Fire Control Room. The latter will then change its guidance to: ‘Evacuate the premises if safe to do so’. Fire Departments around the world are currently grappling with this issue.”

Post-Grenfell, it’s foreseeable that evacuation strategies may need to be changed during a fire incident. “It’s a major change for all stakeholders involved,” explained Timpson. “Consultation, training and maintenance will be vital. We have to find a way of engaging more effectively with building occupants. A formal change process must be followed.”

Further, Timpson asserted: “If we’re going to put another piece of equipment in the building like a BS 8629 system, it’s absolutely vital we make sure the correct processes are followed during installation.”

Are moving towards a position where individual smoke hoods will be issued to the occupants of high-rise residential buildings? “In Europe, temporary fire curtains have been in use for over a decade in Europe,” said Timpson. “We have to accelerate their use here. What about dot matrix signs in staircases? Situational awareness for people is vital.”

When a fire is extinguished and there are, say, 300 people who’ve been de-housed, what’s the plan? “We cannot assume that the local authority will pick up the pieces. That’s a highly questionable assumption. Plans must certainly be in place for peoples’ immediate welfare.”

As it stands, the much-discussed Building Safety Bill forcefully outlines that the ‘Accountable Person’ must take steps to prevent a major incident. In the wake of Grenfell Tower, any excuses for poor fire safety provision are in no way acceptable. In truth, they never were.