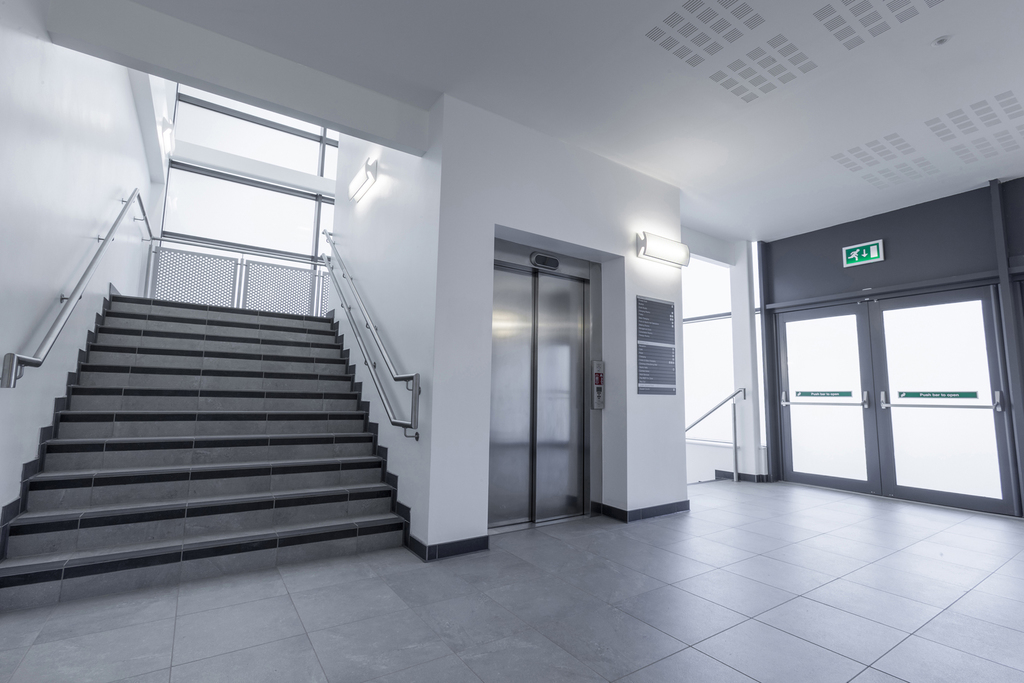 THE RANGE of threats that could trigger emergency procedures within a commercial building has expanded significantly in modern times. While fire has traditionally been identified as the dominant threat, a number of related risks now exists, including terrorism, extreme weather, civil unrest and major crime. All of these threats are potentially exacerbated by increasing urbanisation, which, in some cases, is creating a densely-populated and complicated built environment in which the effects of an emergency can quickly ripple outwards.

The diversity of risks facing commercial buildings and the additional challenges posed by the complicated layout and usage of buildings and the communities in which they exist combine to create a daunting prospect for those people with responsibility for the safety of buildings. However, the fundamental approach of undertaking a risk assessment, implementing appropriate measures in response to this and regularly reviewing the risk profile remains the most effective way to ensure protection.

Life safety is, of course, the priority. In 2015-2016, according to UK fire statistics published by the Home Office, there were 15,984 fires in non-domestic buildings, including industrial premises, offices, leisure venues, health-care facilities, hotels and so on. These led to 21 deaths and 1,089 casualties requiring hospital treatment, which represents a slight increase on 2014-2015.

The potential consequences of failing to plan properly are difficult to overestimate. The preservation of life has to be the most important motivation but a disaster can also have considerable financial, legal, operational and reputational consequences. According to figures from 2008 released by the Association of British Insurers (ABI), the cost of commercial fire damage in the UK was £865 million.

From a legal perspective, organisations in the UK must consider not only the Regulatory Reform (Fire Safety) Order 2005 but also the Corporate Manslaughter and Corporate Homicide Act 2007, under which court proceedings may be brought against companies and organisations for serious management failings resulting in a gross breach of duty of care.

In 2016, new sentencing guidelines were issued to judges considering cases relating to health and safety breaches. These guidelines introduced unlimited fines and stated that they could not be covered by insurance. The potentially devastating impact on company finances is not difficult to imagine.

The liability of individuals is a particular focus of the new guidelines, illustrated by the fact that the number of directors prosecuted under the Health and Safety at Work, etc. Act more than tripled after the guidelines came into effect, going from 15 in 2014-2015 to 46 in 2015-2016.

An additional concern is the reputational damage that can result from neglecting to take all reasonable steps to ensure the safety of the people in the building for which you are responsible. According to research from the international insurance company ACE Group, 81 per cent of companies in EMEA regard reputation as their most significant asset.

Reputation is an intangible and priceless asset, which, if damaged, can have a negative impact on your shareholders, profitability, market share and even bottom line. Reputation –  the sum of values your stakeholders attribute to your company – is arguably even more important to protect than property.

We now live in such a complex and inter-dependent business world that any form of scandal that damages one company will have consequences for other parties up and down the supply chain. Companies are increasingly being held responsible for the actions of their suppliers and vendors, threatening their reputation.

A real-life example of this is the Rana Plaza factory disaster in Bangladesh in 2013, in which 1,129 people lost their lives when the building in which they were working collapsed. Following the disaster, it emerged that improper usage, poor regulation of codes and inspections, and lack of attention from management contributed to the collapse itself. Following this news, various Western retail brands across the supply chain found their reputations tarnished.

The ubiquity of social media is another trend that has altered the dynamics of maintaining reputation. Social media has given all employees and the public a share of voice, and an incident can now be communicated in real time to various stakeholders.

For instance, during the 2015 evacuation of The Shard in London, affected guests shared their experience on social media. One Twitter user reported: “Just had to walk 245m down stairs because there was a fire alarm at the Shard and all the lifts were broken.”  While the likelihood is they were not in operation because of the fire alarm, this is a good example of how social media can rapidly disseminate news – or rumours – about what has happened with your company, or in your building, shaping the opinion of your stakeholders and making it harder to control public perception about the incident.

Allied to reputation is the risk to business continuity. It’s estimated that more than a third of businesses never resume operations after a major fire. Those that do resume operations usually do so after a period of absence, during which the loss of orders, both immediately and for the future, can be extremely damaging.

While the prospect of ‘bouncing back’ to regain market share is not inconceivable, the implementation of protective measures to reduce the likelihood of a disaster, or at least lessen its impact, is a sensible step.

The most effective approach is to consider the three key actions that are required in an emergency: detect, alert and evacuate. An organisation’s ability to complete these three steps is dependent upon thorough risk assessments, meticulous planning, training of staff and the implementation of appropriate technology and equipment.

In the case of fire hazards, the latest fire systems combine detection and notification in a single control panel, which, being ‘addressable’, indicates the location where the hazard was detected. This helps the appointed employees guide occupants in the right direction towards safety, as well as reducing the time taken by fire services to locate and tackle the potential fire.

Rather than being ‘fit and forget’ solutions, these systems require regular testing and maintenance, with all actions properly recorded and logged, to ensure fire systems are ready to activate in an emergency. However, it’s a duty that may be overlooked.

Another consideration that may be neglected is how any building occupants in areas of high noise, or who have hearing difficulties, are notified of a need to evacuate, particularly if there is nobody nearby who could help. This is a concern that is driving increased usage of visual alarm devices (VADs) – high-performing flashing LED beacons that complement an audible alarm where reinforcement is required. Specifiers should be aware that there is a set of European standards, listed under EN 54-23, governing the necessary light output from a VAD, as well as the recommended spacing between devices and the precise site of installation.

Owing to the variety of disabilities, a diverse set of requirements should be considered. Exit routes, for example, are a vital area of concern. Those who are wheelchair-bound will clearly want to avoid stairways but many buildings have a programme in place that deactivates lifts in the event of an alarm being sounded, which can create additional problems.

Other life-safety system components that can prove especially valuable to disabled people, particularly in high-rise buildings, are refuges with two-way communication points installed. These enable people who may be stranded on upper levels to have contact with a central communication point on the ground floor.

Exit routes should be made apparent by illuminated signage and emergency lighting, which are designed to help occupants of commercial and industrial buildings find their way out in the event of power being cut. High-output lighting has also been shown to improve the ability of people with sight impairments find their way along an exit route.

Again, as in the case of VADs, there are standards that advise on the lux output and positioning of emergency lighting, and it’s worth noting that a basic function test should be carried out on all emergency luminaires in a building on a monthly basis, in addition to a full annual discharge test, to ensure the batteries retain the required capacity.

In locations that adhere to this requirement, testing is typically carried out manually, which has major implications in terms of staffing, scheduling and costs. All activity must also be logged for compliance purposes, so the scope for human error is not insignificant. For all these reasons, there’s an increasing move towards adopting automatic testing technology to improve compliance, accuracy, time-saving, cost reduction and responsiveness.

Staying on the subject of public buildings, it is vital for owners and managers to understand that visitors, unlike employees, will not be fully aware of action plans and exit routes. In these environments, voice alarms are worthy of consideration, since they allow for pre-recorded and live announcements to be made via a public-address system to instruct occupants.

Voice alarms can be integrated with everyday public-address systems that play music, for instance. This is a useful demonstration of the way in which safety systems are becoming increasingly integrated to provide building owners and managers with a more unified solution.

Eaton has produced a white paper on the importance of business continuity in disaster planning. For further information, visit eatonworksafe.com