THE EARLY birds at the Fire Safety Event in Manchester this morning (10 October) certainly enjoyed some tasty morsels, in the form of a trio of breakfast briefings on passive fire protection. 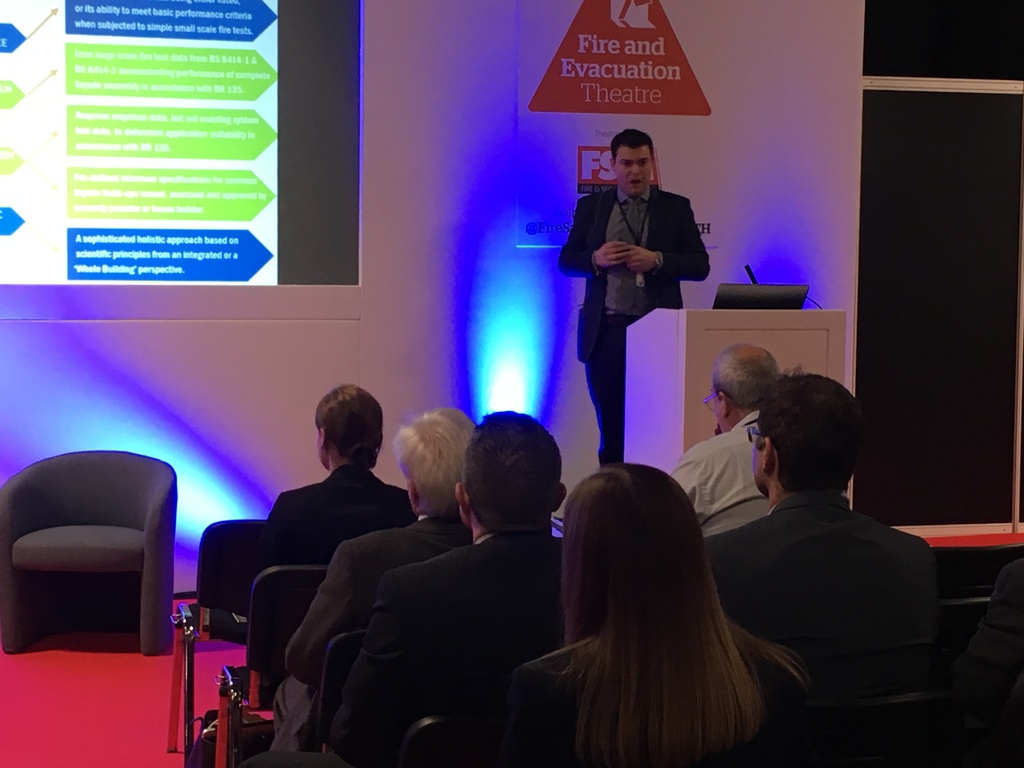 First to take to the stage in the Fire & Evacuation Theatre was Kingspan’s Tony Ryan, who gave delegates an overview of passive fire protection testing from the regulatory and insurance points of view.

Starting off with a quick look at some of the small-scale tests under BS476 parts 6 (products) and 7 (building materials and structures), Tony emphasised that large-scale testing is certainly the most robust form.

He explained that, for mid-rise buildings (those over 18 metres), various tests under BR135/BS8414 are applicable. “The linear, performance and fire safety engineering-based routes that can be taken are all large-scale tests replicating a high-rise façade and measuring fire spread and flame propagation,” said Tony. “They are the most robust route to compliance for buildings over 18 metres.”

Insurance industry tests, such as those under LPCB LPS 1181-1 and 2, are equally robust, he contended.

He went on: “All products that go on the market must be tested to various standards and approved. But equally important is to ensure that those products are installed correctly, and to the correct specifications.”

Key to ensuring this, he continued, is education. “Anyone offering passive fire protection products must be trained to offer the correct products for the right situation.”

With regard to specification, Mark emphasised that this has to be done at the earliest possible stage of a process and not considered as an after-thought. “And use third party-certified installers,” he insisted.

Mark concluded by reminding delegates of the usefulness of trade associations, such as ASFP, ASDMA, PFPF and BWF, all of whom are pushing for better education and training in the industry, and who publish excellent best-practice guides.

Delegates then received a rallying cry from Dr Carl Hunter, MD of Coltraco Ultrasonics, whose message was: don’t fear the Brexit. For exporters, particularly, there are many reasons to be cheerful, he said. “There used to be a great fear of credit risk among exporters, for example, but now you can get sums as low as £10,000 guaranteed by the Treasury – and, indeed, the same value will be guaranteed at your overseas buyer’s bank!”

Providing a real tonic for the troops, Carl went on to remind delegates of the UK’s leading position in terms of military, economic, diplomatic and financial ability and influence. “We are the fifth largest economy in the world, and the second largest in Europe,” he pointed out. “What I’m trying to say is, we can all have a degree of confidence after Brexit. We have a sense, in this country, of incorruptibility – this is at the centre of the UK as a global nation – so have confidence, as we go through these tricky times.”