Sponsored by asecos, the latest webinar in the popular series run by Fire Safety Matters took place on Tuesday 13 April, this time around with the focus on the safe storage and handling of lithium batteries to counteract fire risks. Brian Sims delves deep into what’s an increasingly important area of fire safety 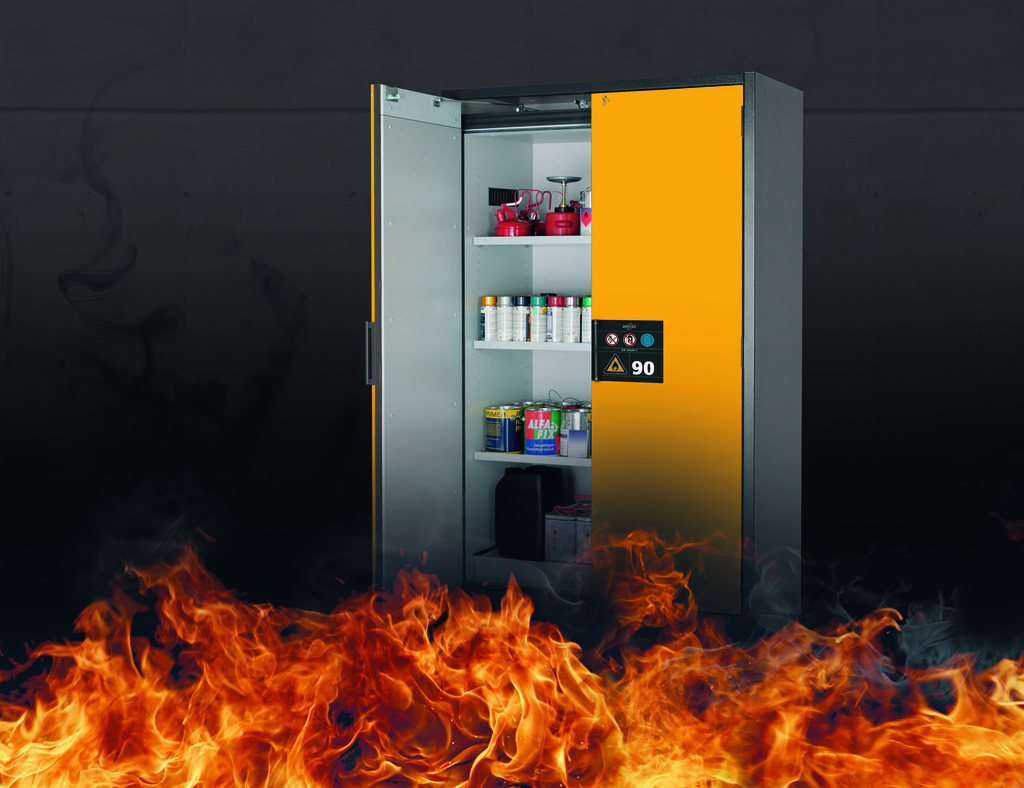 UNDER NORMAL operating conditions, the use of lithium ion batteries is considered to be safe. However, there may be a technical defect present or a battery might be damaged in some way (for example, there could be an impairment to the casing). Unless any such damage is clearly visible, such defects will pass by unnoticed and a once safe situation can rapidly alter to become one that’s potentially critical in nature.

With this in mind, Mark Whiteley (UK and Ireland manager) and Les Day (regional sales manager) from hazardous materials storage specialist asecos joined forces last month to present the latest Fire Safety Matters Webinar. Running from 10.30 am-11.30 am on Tuesday 13 April, ‘The Safe Storage and Handling of Lithium Batteries and Avoiding Risks from Fire’ expertly highlighted the myriad dangers posed by lithium ion batteries and sought to explain why it’s so important for end users to have an action plan and the right degree of protection in place should an incident begin to unfold.

Under the expert chairmanship of Mark Sennett (CEO at Western Business Media), Whiteley’s 45-minute presentation looked at how lithium batteries behave when something does go wrong and, importantly, outlined the key differences between passive and active battery storage options with an easy-to-understand explanation of the technology underpinning safe storage cabinets as well as a run-through of UK and European standards, legislation and guidance to be observed.

asecos was founded in 1994 and is headquartered in Gründau, circa 30 miles from Frankfurt. The company’s core competence is developing safety storage cabinets for hazardous materials. Over 250 different cabinet models are presently available with lots of interior configuration options. “Our core goal,” observed Whiteley, “is to contain hazardous materials, protect the staff handling them and also safeguard the property in which those staff work.”

From its German base, the business designs, develops, manufactures and distributes storage cabinets for lithium batteries, flammables, corrosives, non-flammable and non-corrosive chemicals, toxic substances and compressed gases, with Whiteley and Day recognised as experts on this subject matter.

When it comes to general safety guidelines here in the UK, the legislation is really important in terms of conducting a risk assessment, while also focused on legal obligations. “The Dangerous Substance and Explosive Atmospheres Regulations (2002) are the backbone for the storage of hazardous materials,” stated Whiteley. “It’s Statutory Instrument demanding legal compliance, yet so many businesses appear not to have conducted risk assessments in line with this document.”

HSG71 offers guidance on the necessary segregation of chemicals and their classification in the workplace and is very important for end users. HSG51 affords the necessary guidance for developing, designing and defining a storage area, encompassing both storage indoors and outdoors. It details essential components such as safe distances from buildings and what kind of fire resistance is needed. For its part, HSG140 covers the management of flammable liquids.

“The bread and butter for asecos is BS EN 14470 Parts 1 and 2,” continued Whiteley, “governing the fire resistance of a finished product either for 30 or 90 minutes’ duration. Part 1 references flammable liquids and Part 2 compressed gases. EH40 (2005) offers guidance for occupational/workplace exposure limits in relation to particular chemicals and is really useful when the time comes to define an extraction regime on site.”

HSG258 is all about the design and installation of extraction systems, where to locate them and the key considerations involved. Whiteley noted that this document is particularly useful when viewed in conjunction with the Dangerous Substance and Explosive Atmospheres Regulations (2002).

According to Whiteley, the well-known Health and Safety at Work Act 1974 is “often seen, but rarely read”. It outlines key responsibilities for employers in relation to user care and maintenance around workplace equipment. Those responsibilities falling upon the shoulders of the manufacturers of that equipment are outlined. Last but not least, there’s the Control of Substances Hazardous to Health Regulations (2002). This is a statutory set of guidance for the protection of employees in hazardous workplaces.

A hazardous material can be defined as any item or agent – biological, chemical or physical – which has the potential to cause harm to humans, animals or the environment, either by itself or through interaction with other elements/factors. Raw materials and waste materials are in scope here.

“When you’re storing hazardous materials in the workplace,” asserted Whiteley. “their chemical characteristics are extremely important. Waste streams must be risk assessed. The hazard symbols for ‘Flammable’, ‘Corrosive’, ‘Explosive’, ‘Oxidising’, ‘Acute Toxicity’, ‘Hazardous to the Environment’, ‘Hazard’, ‘Serious Health Hazard’ and ‘Gas Under Pressure’ enable the classification of hazardous materials in the workplace.”

Turning towards storage classes for hazardous materials, Whiteley referenced Table 2 from HSG71 defining the use of Globally Harmonised System (GHS) symbols against specific hazards in the workplace and drew webinar delegates’ attention to flammable liquids. “We’ve talked to customers about them breaking away from using the GHS symbols to define a storage protocol. We need to go back to basics here. Look at the chemicals and evaluate what hazards are posed by them and then assess how storage might be co-located.”

Batteries are not classed as a hazardous material by the GHS, but there’s no doubt that they possess hazardous properties. “Batteries frequently make the news,” stated Whiteley. “There have been a few spectacular accidents, but many incidents in workshops, production facilities and even in the homes can pass by unnoticed by the wider world.”

There were two major incidents in Germany a couple of years back. On 2 September 2019, a major fire broke out at the Gut Scheibenhardt Golf Club due to a technical defect at a gold trolley charging station. The trolley on charge was left unattended. On 15 November that year, fire destroyed the roof of a postal distribution centre in Alsfeld. The cause was a technical defect at a charging station for e-bike batteries.

Lithium batteries have been around since the 1990s. They power our smart phones, laptops, power tools, analytical equipment, electric cars and more. Set against previous battery technologies, they yield a high energy storage capacity in a compact space. They’re low weight and fast to charge as well as being economical and essential for the mainstream adoption of electric vehicles.

“There’s one big problem with lithium ion batteries, though,” highlighted Whiteley, “and that’s ‘thermal runaway’. It’s a process that starts in a battery cell and leads to an increasing temperature until the cell disintegrates and then suddenly releases its stored energy. That makes other cells disintegrate and release even more energy. There’s a positive feedback loop and an exponential reaction. The end result can be very unpredictable, ranging from a rapid explosion to a slow smouldering fire. If thermal runaway occurs, you need to have a very good protection mechanism in place to avoid the consequences and prevent fire spread.”

Lithium battery fires are hard to extinguish and can realise harmful by-products such as hydrogen gas (which is highly flammable) and hydrofluoric acid (that’s both corrosive and toxic). This presents a notably significant challenge for today’s fire safety professionals.

Before going on to talk about the design of safety cabinets for lithium batteries, Whiteley stressed: “We first need to understand the concept. The concept is focused on supervision of the charging process, the detection of any potential incidents, the suppression of any fire that may occur in the cabinet and evacuation of that cabinet and personnel from the premises. That means if there’s a faulty battery, we need to know as quickly as possible where it is.”

Supervision is Step 1 and essential to a good concept. “In fact,” noted Whiteley, “planning supervision is a fundamental principle of good safety and the first step on the ladder towards a successful solution.”

asecos has developed the ION-Line. There are four cabinets in the range: Battery Charge Pro, Battery Charge, Battery Store Pro and Battery Store, the first two for active storage and the second two for passive storage. All are fire resistant for 90 minutes in accordance with EN 14470-1 and DIN EN 1363-1.

“Safety storage cabinets with a fire resistance of at least 90 minutes are considered a storage section,” affirmed Whiteley. “ION-Line cabinets fulfil the requirements of a separated, structurally fire-resistant storage area. Over 90% of users place their hazardous materials in a cabinet without understanding the risks posed by those materials in the event of a fire. It’s unforgivable that people still put hazardous materials in cabinets only to keep them out of sight and out of mind. Cabinets must be tested to EN 14470-1 to show that they fulfil the fire resistance requirements.”

Storage cabinets must be able to withstand a fire from the inside. “To ascertain fire protection from the inside to the outside, we’ve tested the ION-Line range in accordance with EN 1363-1:2012-10 which originated from the European building codes. We ran the tests at 1,300 degrees Centigrade.”

asecos’ Battery Store is a basic cabinet model with no fire detection or alarm features. It’s very much a passive storage cabinet for new batteries and doesn’t provide any kind of supervision during the charging process. If you have new batteries coming in and only store them temporarily inside during working hours then this could be a valid choice.

What should be done about batteries that have obvious damage? “They should never be stored inside buildings,” said Whiteley. “Dispose of them promptly in appropriate disposal containers made of steel and suitable for transportation outside of buildings. It’s all about fire and risk minimisation.”

Battery Store Pro takes matters further by including a temperature sensor and smoke detector. There’s a fire suppression unit within and also a multi-stage alarm system that can be linked to an Alarm Receiving Centre. In essence, this is a “supervised cabinet”, confirmed Whiteley, for storing lithium batteries.

If the interior temperature of a cabinet rises above 50 degrees Centigrade, the warning/fire suppression system triggers a warning message to the central control office. Possible causes are a temperature build-up due to battery charging processes or a ventilation system failure.

“Alarm Level One is triggered when smoke begins to form in the cabinet as soon as the smoke detector is activated,” stated Whiteley. “A possible cause is that smoke is detected without a simultaneous temperature increase. Alarm Level Two is triggered when the smoke detector’s already activated and the temperature sensor registers an interior temperature greater than 70 degrees Centigrade. A possible cause here is, of course, the outbreak of fire.”

Joining proceedings for the Q&A session, Les Day referenced a report published in January by Eunomia Research and Consulting wherein it’s stated that 48% of annual waste fires are caused by lithium ion batteries and cost the UK’s economy something in the region of £158 million per annum.

Indeed, between April 2019 and March last year, such batteries are suspected to have realised around 250 fires at waste facilities. The threat, then, is very real. Lithium batteries should be treated as a hazardous material. Don’t delay. Risk-assess your storage or charging situation and take safety action now.

*‘Hazmat Guide – Gases’ is the tile of the next webinar to be run by Fire Safety Matters in conjunction with asecos. Tuesday 22 June from 10.30 am-11.30 am. Register now at this link: https://cutt.ly/Zv49ecU