PEOPLE WHO use emollients and smoke are at greater risk of setting themselves on fire due to the flammable residue that may be left on clothes, bandages and bedding, warns the National Fire Chiefs Council (NFCC). 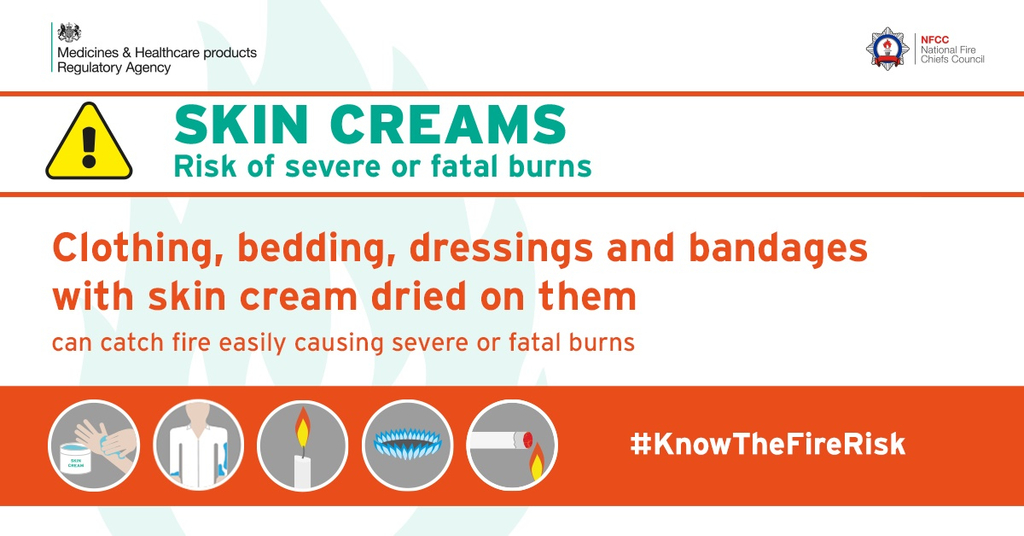 The warning comes after research from Anglia Ruskin University, De Montfort University and the NFCC’s own Emollient Group confirmed that both paraffin and non-paraffin emollients can act as an accelerant when absorbed into clothing and exposed to naked flames or other heat sources.

The Medicines and Healthcare Products Regulatory Agency has partnered with the NFCC, Fire and Rescue Services and health charities in a new campaign to raise awareness of the fire risk and the precautions that need to be taken by users of skin creams.

Emollient products – which include creams, ointments, sprays and body wash formulations – are used by millions of people every day to manage dry, itchy or scaly skin conditions such as eczema, psoriasis and ichthyosis. They may contain paraffin or other ingredients such as shea or cocoa butter, beeswax, lanolin, nut oil or mineral oils which can leave a flammable residue.

Commonly prescribed by GPs, nurses and other clinicians, as well as being available in chemists and supermarkets, emollients are not flammable in themselves. The risk occurs when they absorb into fabrics and are then exposed to naked flames or heat sources, in turn resulting in a fire that burns quickly and intensely and can cause serious injury or even death.

Testing has confirmed that the flammability increases each time the fabric is contaminated with emollient and the risk is greater when applied over large parts of the body. Repeated washing of clothing, bandages and bedding at any temperature does not remove the fire risk.

Over 60’s who smoke and have reduced mobility are those most at risk and the NFCC is urging them, their families and carers to be alert to the inherent fire risk and updated fire safety advice. The NFCC urges they are mindful if smoking or using sources of heat and flame such as lighters, matches, electric/halogen heaters, gas hobs and candles.

The NFCC is aware that there have been 56 deaths confirmed as involving emollient in England since 2010. In addition, six of the 44 fire deaths reported in Scotland in 2018-2019 involved emollient products. The NFCC is working with Fire and Rescue Services to ensure the fire risks associated with emollients are understood by staff and discussed during home fire safety visits.

Chris Bell, the NFCC’s emollient lead, said: “This new fire safety advice is based on scientific evidence confirming for the first time that non-paraffin emollients pose the same fire risk as those containing paraffin. If you use an emollient skin product, or care for somebody who does, stay away or be extra careful when near to naked flames or potential ignition sources. People need to be aware that washing does not remove the risk. We want to do all we can to prevent another tragedy from happening.”

In 2018, the Medicines and Healthcare Products Regulatory Agency recommended that labelling and product information be updated to include clear advice about the fire risk on emollient products including paraffin-free creams. There has since been an improvement in labelling, but the NFCC urges all manufacturers to fully adopt this recommendation across all emollient products.

Sarah Branch, director of Medicines and Healthcare Products Regulatory Agency’s Vigilance and Risk Management of Medicines Division, stated: “We want to ensure that those who are at greatest risk, and their carers, understand the fire risk associated with the build-up of residue on clothing and bedding and take action to minimise the risk. Anyone who uses emollients and has any questions or concerns should speak to a healthcare professional, such as their pharmacist or GP.

Dr Sarah Hall, senior lecturer in analytical forensic chemistry at De Montfort University, has been carrying out the research since 2013. Dr Hall commented: “Our flammability tests have shown fabrics contaminated with paraffin-containing and paraffin-free emollients ignite much quicker than uncontaminated fabrics. The time to ignition can be just a few seconds which means if someone accidentally sets themselves on fire, their chances of extinguishing the fire or escaping are greatly reduced. We also found that emollient residue remained on the fabric even after washing at high temperatures and some of the residue transferred on to previously uncontaminated fabrics which had been washed in the machine at the same time.”

Dr Hall concluded: “I’m pleased that our research has supported the changes to product labelling and will enable a greater understanding of the potential fire risks among the health and care sectors and, indeed, throughout the Fire and Rescue Services.”