THE NATIONAL Fire Chiefs Council (NFCC) is actively encouraging Fire and Rescue Services to support the National Sprinkler Week campaign. The campaign runs from Monday 17 May through until Sunday 23 May and is specifically designed to raise awareness of the benefits of sprinkler systems in keeping people and buildings safe from fire. 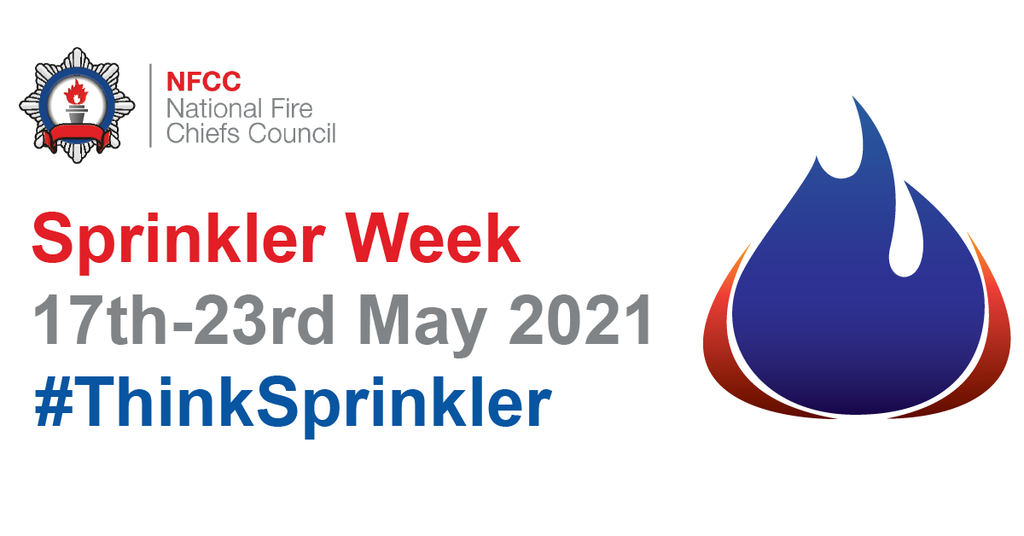 Fire sprinklers are widely recognised as the single most effective method for fighting the spread of fires when the latter are in their early stages. Research conducted by the NFCC and the National Fire Sprinkler Network found that sprinkler systems operate on 94% of occasions so are very reliable. When they do operate, they extinguish or contain fire on 99% of occasions.

Ultimately, that results in sprinklers reducing injuries by at least 80%, cutting down on property damage by 90% and substantially reducing damage posed to the environment from fire. This also means that sprinkler systems assist in protecting the lives of firefighters as they respond to much smaller incidents when sprinklers are installed.

Despite all of that compelling evidence, there’s still some disparity when it comes to Building Regulations and sprinkler systems across the UK. The legislation in Wales and Scotland is stricter across many building types meaning that the communities resident within have more fire protection than do those of England and Northern Ireland. This is something that the NFCC is calling upon Government to remedy.

The basic aims and objectives of the campaign are to highlight the critical role that sprinklers can play as part of a bespoke package of fire safety measures, focus on the importance of more sprinklers being installed in schools to limit both the societal and economic impact of fires in the educational setting and also to dispel the myths around sprinkler systems.

For example, many believe that sprinklers can flood a building if they’re activated. That’s not true. Each sprinkler head must be activated. Only those sprinkler heads affected by heat from a fire will activate. That scenario is usually enough to extinguish or contain the fire. It’s also a misconception that the water from sprinklers causes more damage to a building than the fire itself. In point of fact, sprinklers use a lot less water than a firefighter’s hose while suppressing fire and smoke.

One area in which the NFCC has expressed concern is that of new build schools. In Scotland and Wales sprinklers are required, but they’re not currently mandated in England or Northern Ireland. That’s despite research from schools insurer Zurich Municipal identifying the fact that schools are nearly twice as likely to suffer a fire as other types of commercial building.

On average, Fire and Rescue services in the UK attend circa 1,500 school fires every year which realise disruption to the education of around 90, 000 pupils. Over a four-year period, an average of 24 large loss school fires occurred totalling £67.2 million and engendered a massive detrimental impact on the local communities involved.

Building Bulletin 100 is a design guide for fire safety in schools. The current expectation introduced in 2007 states that: “All new schools will have sprinklers fitted. Any exceptions to this will have to be justified by demonstrating that a school is low risk and that the use of sprinklers would not be good value for money.” It was hoped that this would see an increase in sprinkler systems in new build schools, but the risk assessment tools included in the guidance allowed designers to work around this expectation largely based on a value for money scenario. As a result, the NFCC would like the risk assessment toolkit retired and has called for all new schools to be fitted with sprinklers. An amendment to Building Bulletin 100 can achieve that aim.

Jonathan Dyson, the NFCC’s lead for sprinklers, explained: “The evidence speaks for itself. Our research proves that sprinklers are very effective and provide strong fire safety protections as part of a fire safety package. Wales and Scotland recognise this and have implemented measures to make their communities safer from fire. We want to see the same rules applicable in England and Northern Ireland as a matter of urgency. Fire does not discriminate and is just as dangerous in England and Northern Ireland as it is in the rest of the UK.”

It’s estimated that the cost of a sprinkler system’s installation can be recovered over a period of about ten years through reduced insurance premiums and less disruption to business continuity if a fire occurs.