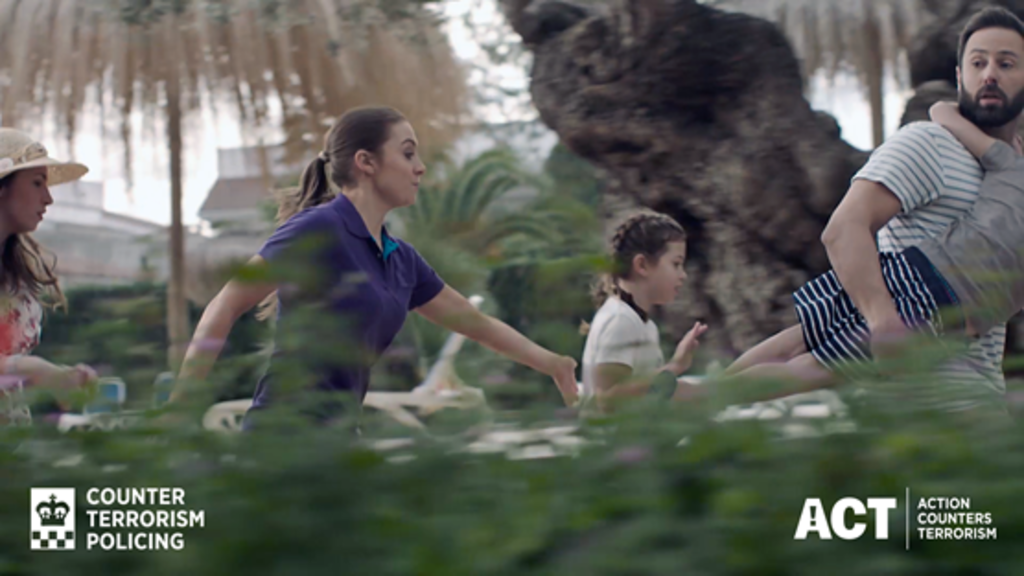 The key advice is:

Run- to a place of safety. This is better than trying to surrender or negotiate.

Hide- it is better to hide than confront. Barricade yourself in, turn phones to silent and use only when it is safe to do so.

Tell - Make sure you know the local emergency numbers in the country you're travelling to. For all EU countries it's 112.

As UK schools break up for summer holidays and the travel industry prepares for one of the busiest periods of the year, the UK's most senior counter terrorism officers are asking holidaymakers to play their part by watching a short video instructing them what to do in the unlikely event of an attack.

CT Policing - in association with the Foreign and Commonwealth Office, the Home Office and The Travel Association ABTA - launched the four minute film just over a year ago and since then more than seven million people have learned how to keep themselves and others safe should the worst happen.

ABTA have also translated the video into 15 different languages for use in multiple countries, to improve awareness amongst the holiday representatives, hotel staff and security guards who look after millions of UK tourists every year.

The video was first created after 30 British people tragically lost their lives in the 2015 Sousse attack in Tunisia.

Since then CT Policing’s international footprint has expanded significantly, with increases to the number of officers providing a range of security liaison and advice to other countries, ensuring they are better prepared to keep people safe when overseas.

This is a 'whole system approach' to fighting the threat from global terrorism. By warning and informing citizens, training and advising industry and close liaison with domestic and international partners, each of these strands comes together to better protect the UK and its interests at home and abroad.

The FCO also advises holidaymakers to read the FCO Travel Advice - www.gov.uk/foreign-travel-advice and to sign up for email alerts to be notified of any updates for their destination, either before or during travel. Travel advice provides objective information and advice to help people make better-informed decisions about foreign travel.

Chief superintendent and national coordinator for Protect and Prepare Nick Aldworth says, "The chances of being caught up in a terrorist incident are still low, but sadly we have seen atrocities take place in the UK and abroad, especially last year. So it is important everyone stays alert and knows what to do if the worst was to happen.

"An important part of my job is deploying police officers and staff around the world to share the UK's world renowned security expertise, to better protect our citizens from harm.

“Now we are asking the public to play an active part, by taking the time to watch this video.

“We want people to think of this in the same way they do the safety film airlines show before take-off. They don't expect anything bad to happen but it is a sensible safety precaution to show people what to do."

Security minister, Ben Wallace MP, says, "Fortunately the majority of us will never experience a terrorist attack whilst enjoying a holiday abroad and there is no need to be alarmed.

"However, it is important that we all remain vigilant to the threat.

"I urge all holidaymakers to take a moment before heading off on their travels to view the Run, Hide, Tell advice, which could be life-saving should the worst happen.

"I also urge everyone to read the small print on their travel insurance to make sure they have the appropriate level of cover."

Minister for counter-terrorism, Lord Ahmad of Wimbledon says, “We work closely with our international partners to ensure that British holidaymakers are safe overseas.

“While the chances of getting caught up in a terrorist event are extremely low, it is important that people remain vigilant.

“Before going away do take a moment to check the FCO’s travel advice to make sure you’re aware of what’s going on in the country you’re going to.

“We encourage everyone to take sensible precautions whilst abroad, and if an incident occurs, remember the key advice to Run, Hide, Tell.”

Director of destinations and sustainability Nikki White from ABTA adds, “We recognise the importance of raising awareness and providing clear guidance for our Members and their employees.

“We know that customers would look to those staff working in their hotels and resorts to take the lead and respond quickly to an emerging situation.”