THE UK’S most senior counter terrorism officer has praised the public’s willingness to ACT in response to the unprecedented terrorist threat, revealing that the number of attacks foiled since March 2017 has risen to 18. 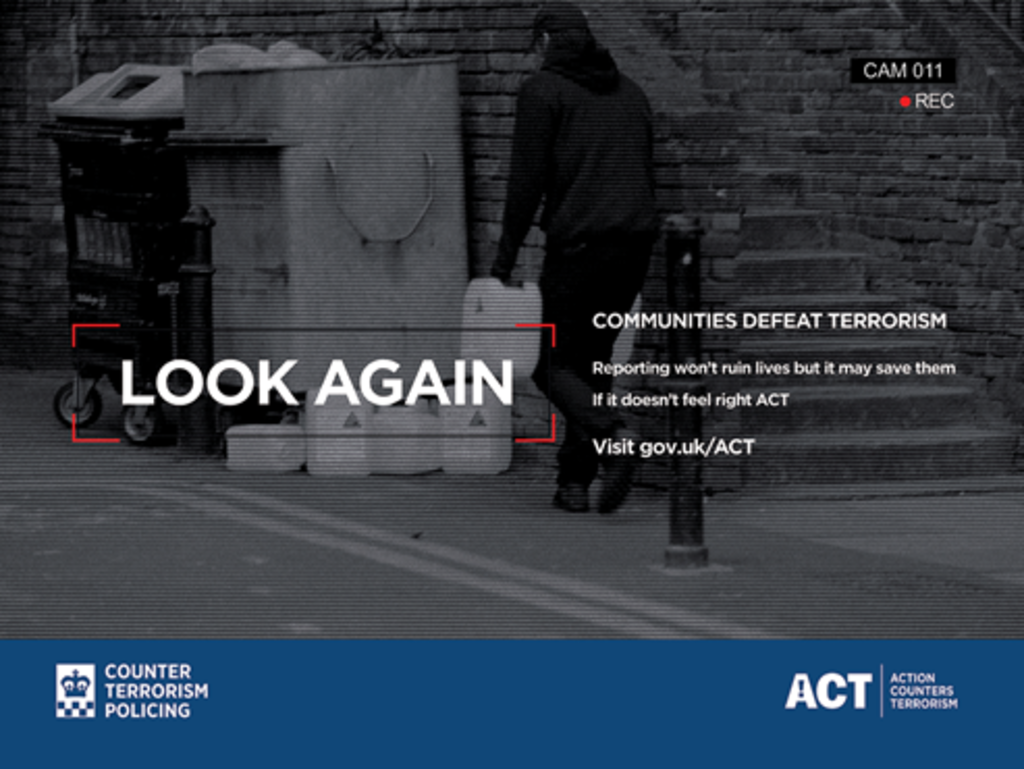 The head of UK Counter Terrorism Policing, Assistant Commissioner Neil Basu, believes that the public are playing a crucial role in helping police and the security services disrupt terrorist activity, with more than 22% of all reports from the public producing intelligence which is helpful to police.

Counter Terrorism Policing are once again highlighting the importance of communities in the UK’s fight against terrorism by launching a new public information campaign, which will be shown exclusively in UK cinemas.

The blockbuster sequel to last year’s ‘Communities Defeat Terrorism’ campaign will feature a new 60-second film based on real-life foiled plots, which will show examples of terrorist-related suspicious activity and behaviour, as well as attack planning methodology.

Airing across 120 cinemas nationwide for the next eight weeks, the film will encourage people to report suspicious behaviour and activity through www.gov.uk/ACT and the confidential hotline - 0800 789 321.

Assistant Commissioner of Specialist Operations (ACSO), Neil Basu, said, “Thankfully, we did not see the horrors of 2017 repeated last year, but we should not be complacent enough to think the terrorist threat has diminished – the UK threat level remains at SEVERE meaning an attack is highly likely.

“Counter Terrorism Policing officers are currently running more than 700 live investigations nationwide, while crucial intelligence from the public has helped police and the security services prevent 18 terror attacks in just under two years.

“We have been emphasising for some time that communities defeat terrorism, and the fact that more and more reports from the public provide information that is useful to our officers demonstrates this.

“Despite this increasing support, I know some people are still reluctant to speak to us. To them I say, reporting your concerns to us won’t ruin lives, but it might save them."

Data analysed by Counter Terrorism Policing indicates that the public are consistently providing information which is relevant to police.

These figures demonstrate the importance of Counter Terrorism Policing’s work to inform the public about terrorist attack planning methodology, so if you are still unsure about how or what to report to police then please visit www.counterterrorism.police.uk for more information.

“Like other criminals, terrorists need to plan and that creates opportunities for police and the security services to discover and stop these attacks before they happen,” says ACSO Basu.

“But we need your help to exploit these opportunities, so if you see or hear something unusual or suspicious trust your instincts and ACT by reporting it in confidence by phone or online.

“That could be someone buying or storing chemicals, fertilisers or gas cylinders for no obvious reasons, or receiving deliveries for unusual items, it could be someone embracing extremist ideology, or searching for such material online.

“This new film has been made to try and help people understand recent terrorist attack-planning methods, but also to demonstrate that each report from the public can be one vital piece of a much larger picture.

“The important thing for people to remember is that no report is a waste of our time, trust your instincts and tell us if something doesn’t feel right.”

Home Secretary Sajid Javid said: “The threat from terrorism is one of the starkest we face and we have all seen the horrific consequences of a terrorist incident.

“With the support of the public, our police and intelligence agencies work tirelessly to keep our communities safe. We all have a role to play in confronting those who seek to do us harm.

“Life really doesn’t have a rewind button so, if something doesn’t feel right, trust your instincts and report any suspicious activity or behaviour as soon as you can.”