Arinite research highlights buildings most at risk from fire outbreak

RESEARCH CONDUCTED by Health and Safety consultants at Arinite reveals those building types with the highest levels of Fire and Rescue Service attendance in the UK across 2020-2021. The research results highlight that non-residential private sector buildings accounted for the highest rate of fire incidents with a total of 3,587 fire episodes. 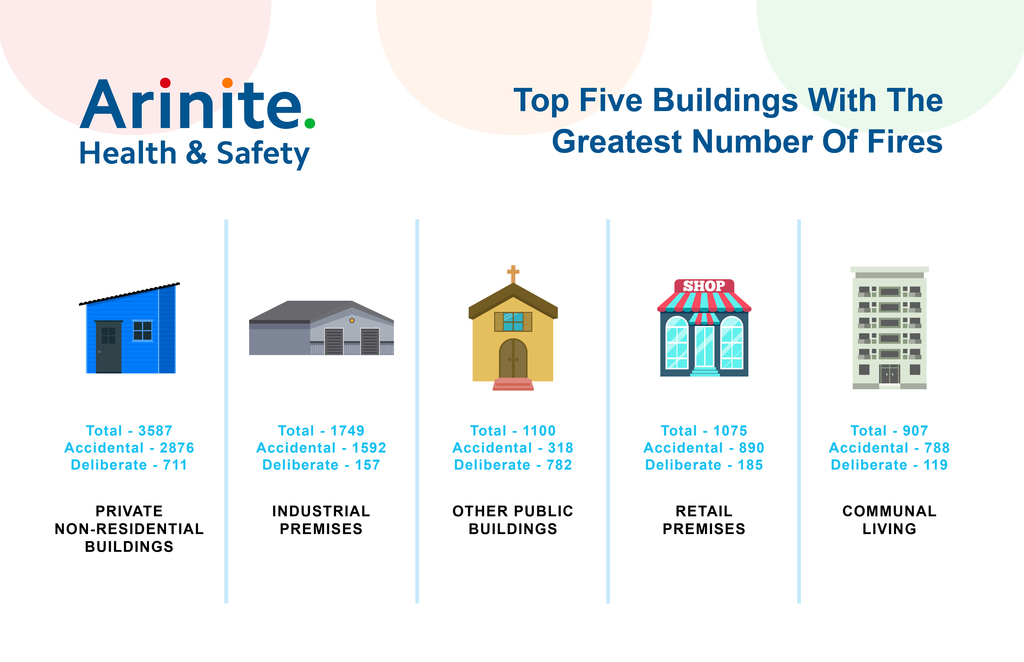 During 2020-2021, the Fire and Rescue Service was called to attend 11,916 primary fire incidents at non-residential premises. 80.2% of those 3,587 incidents attended were due to accidental causes, while 19.8% were deliberate. The non-residential private sector buildings referenced include private garages and garden sheds.

Industrial premises such as manufacturing facilities, vehicle repair sites and warehouses are shown to be the second most combustible building type. There were 1,749 fires at such premises attended by the Fire and Rescue Service in 2020-2021, with 91% of them being accidental and 9% deliberate. Of all the building types studied, industrial premises harbour the largest ratio of accidental to deliberate fires.

The third most fire-prone building type is classified as ‘Other public buildings’. Here, the focus is on car parks, religious buildings and transport-related structures. During 2020-2021, the Fire and Rescue Services attended fires at such buildings on 1,100 occasions. There were significantly more deliberate fires at these types of premises, with 71.1% of them being set intentionally. Fires that were accidental accounted for 28.9% of all episodes.

Many such premises allow public traffic to flow freely in and around them. As a result of high footfall and due to the open access that’s necessary, these buildings are easy targets for fires to be set intentionally.

Retail premises – ranging from independent shops through to individual supermarkets and Shopping Centres – are the fourth most ‘at risk’ building type. The Fire and Rescue Service was called to attend 1,075 incidents at retail premises in 2020-2021. There were more accidental fires (82.8%) than deliberate fires (17.2%). Home improvement retail facilities, of course, store a high level of flammable materials such as white spirit and firelighters.

Communal living facilities include boarding schools, sheltered housing and student halls. This type of building ranked in fifth place in terms of being the most combustible in the UK. Firefighters responded to 907 fires last year in such facilities, 13.1% of which were deliberate and 86.9% accidental.

The building type exhibiting the least amount of fire situations during the study period is entertainment, culture and sporting facilities. In 2020-2021, the Fire and Rescue Service responded to 275 fires at such premises, of which 64% were accidental and 36% deliberate.

Educational premises are the building type with the second lowest fire risk. The majority of fires that occur in these establishments are accidental in nature and can be caused by faulty wiring or poorly maintained appliances. Across 2020-2021, a total of 333 fires were attended by the Fire and Rescue Service. 80.5% of them were accidental (educational buildings are the most likely to experience accidental fires, in fact) and 19.5% started deliberately.

It's crucial to have an up-to-date fire safety plan in place for educational facilities given that a large proportion of them are occupied by youngsters.

When it comes to agricultural premises, large open spaces full of combustible materials such as seeds, dry grass and wheat can lead to unmanageable fires. Combining these combustible materials with wooden barn structures contributes to the amount of fires experienced om farms every year. Between 2020 and 2021, 536 fires were attended by the Fire and Rescue Service. Of those 536 incidents, 80.4% were accidental and 19.6% of them deliberate.

Hotels, boarding houses and hostels made the Top Ten list of most flammable buildings. 436 fires were attended by the Fire and Rescue Service. 79.4% of all incidents were accidental compared to the 20.6% that were deliberate.

The tenth most combustible building type is the office/Call Centre environment. Faulty equipment, clutter and human error are among the foremost reasons why fires break out at these premises. During 2020-2021, 334 fires were attended across the UK. 18.9% of these fires were accidental, which is in stark contrast to the 81.1% of them that were deliberate.

Commenting on the research results, Bill Tucker (head of fire safety at Arinite) explained: “Fires can occur anywhere and at any time. However, businesses are able to take steps to prevent them and protect their employees. Developing a robust fire safety policy that includes designated fire safety personnel and a fire action plan is the first step.”

Tucker continued: “A fire can be prevented by keeping areas clean and free of clutter. By removing unnecessary clutter, you can reduce the time it takes for a building to catch fire.”

In addition, Tucker observed: “You can protect your business from accidental and deliberate fires by regularly servicing fire extinguishers, designating smoking areas that are separate from the building and locking up the premises correctly when the working day is concluded.”

Every year, in excess of 3,000 arson attacks are perpetrated on businesses, making this form of criminality one of the most overlooked aspects of fire safety in the workplace. When assessing fire risks, the vulnerability to an arson attack should be afforded priority.

On that note, Tucker concluded: “Identifying areas that contain a high amount of combustible material as well as weak spots where a fire may spread into a building are just a couple of ways in which to prevent arson attacks.”

*Read the Arinite report in full
MORE FROM THIS COMPANY