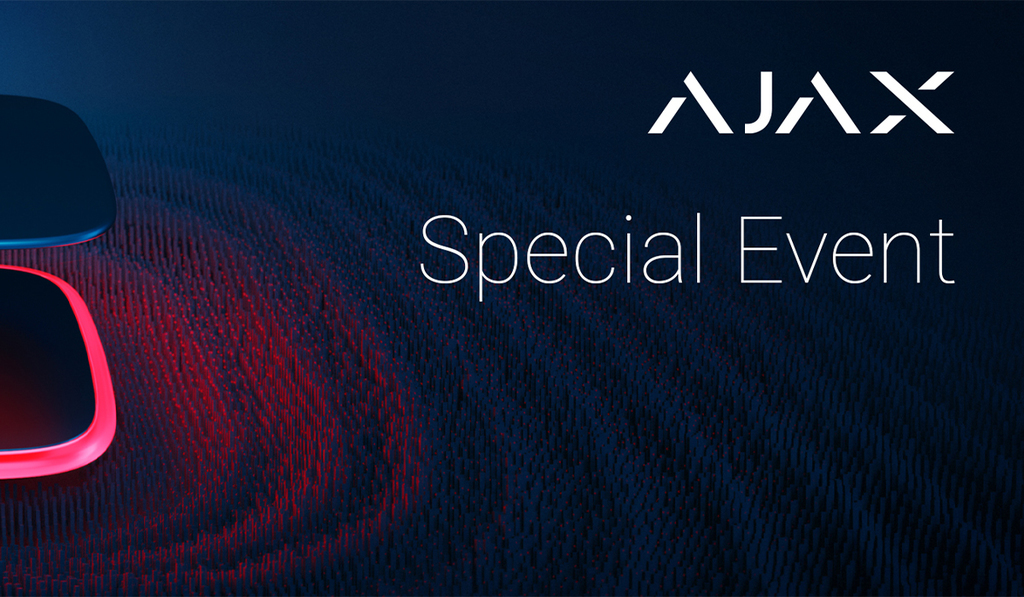 Ajax Systems is an international business with upwards of 500,000 users of its solutions worldwide, and no less than 25,000 installation engineers who use its equipment. Due to the pandemic, of course, the company is presently unable to communicate with its audience on a personal one-to-one basis and present its new devices and updates in that format. Hence the decision to go down the virtual presentation route.

Users and partners from 96 countries were invited to attend the presentation, with more than 3,000 people watching live in the first hour. The devices and software updates upon which the company has focused in the first half of 2020 served as the central topic for discussion.

No matter how advanced a given security system might be, there can exist a potential Achilles heel: an end user account that can be accessed by others. To circumvent this issue, Ajax Systems has focused on modern digital security tools. As early as May, all system users were provided with a strong combination: default session control and an option to activate two-factor authentication which is now becoming more and more popular.

Armed with both of these, end users will not be prone to attackers being able to access their account even if they should be privy to login and password information. If an account is accessed from a suspicious device, the user will immediately be notified about this and then be able to terminate the present session.

Thanks to an alternative power supply unit, users can protect their ‘movable’ property even without a power supply. Ajax Systems’ PSU 12 V and PSU 6 V solutions replace standard hub power supplies, allowing the end user to power their devices from a battery.

Hub 2 Plus is the newest and most powerful Ajax Systems central unit to date. It boasts a processor that’s four times more powerful than that to be found in a normal hub and has eight times more memory. It also supports more detectors than the previous models – up to 200, in fact (including those with photo-verification) and more cameras (up to 100).

Importantly, LTE support is now available for the first time. In total, there are four independent communication channels: 2х SIM (4G/3G/2G), Ethernet and Wi-Fi. That being the case, even an abnormal series of failures or malfunctions in the network equipment will not prevent the system from communicating with the outside world.

With the next update of the branded OS Malevich operating system, Ajax Systems will have the data import function. Before this point, the process of reconnecting all detectors from an old hub to a new one could take several hours. Now, the installer can manage this process on behalf of the end user in a matter of five minutes. There will be no need to reconfigure the central unit or dismantle and reconnect each device in the system, invite users and define their rights. For the importing procedure, all that’s required is access to the old hub and an Internet connection.

Interestingly, the OS update brings a number of additional features. For example, temporary device shutdown will allow end users to avoid false alerts if the devices are not working correctly. Pulse mode, meanwhile, is a temporary power supply to a relay and the socket smart plug. Further, the panic button can be programmed for a specific notification type – intrusion, fire, medical assistance, or a gas alarm.

When the panic button is pressed, the co-ordinates of a given smart phone will be transferred to the security company app.

As stated, Ajax Systems operates in many markets and, necessarily, each region has its own specific equipment requirements. For example, the UK security market is a mature one with established traditions. One of them is centred on branding street sirens.

Giving that tradition a modern and updated look, Ajax Systems has introduced StreetSiren DoubleDeck, a wireless outdoor siren with a mount for a branded front panel. It can display the logo and the contacts of the security or installation company that’s responsible for the security of the facility.

Alarm confirmation with multiple detectors will soon be made available and an optional two-stage arming/disarming mode introduced.

For its part, Multi-Transmitter allows the end users of wired security systems to switch to Ajax Systems on a painless basis. The new integration module permits the integration of third party wired detectors into the system. It’s now possible to connect 18 wired devices to it on a simultaneous basis and set up an alarm type for each of them.

Users will not have to remove cables already laid or throw away old detectors. Cable devices will be connected to the Multi-Transmitter and transmit alarms to the Ajax Systems hub via the Jeweller radio network. Then, the hub will send them to the user’s smart phone and the security company’s monitoring station. There’s an option to use groups as well as 24/7 arming mode and even involve third party devices in specific scenarios. Now, the end user will also be able to add Ajax Systems security detectors, which work together in harmony with the wired variants.

For security companies and large corporate clients, Ajax Systems also used the virtual presentation to highlight a beta version of its own central monitoring station — 911. With this, any security company will be ready to monitor alarms in just a few minutes. There will be no need to worry about buying and configuring servers, organising network infrastructure or dedicated IP. Connecting a computer to the Internet and logging into the Ajax PRO account is all that’s necessary. All processing takes place in the cloud.