GROUNDBREAKING RESEARCH has revealed the serious health risks posed to UK firefighters following exposure to toxic fire effluents (ie the chemicals emitted during a fire). That’s the key finding of a report produced by the University of Central Lancashire (UCLan) and commissioned by the Fire Brigades Union (FBU). 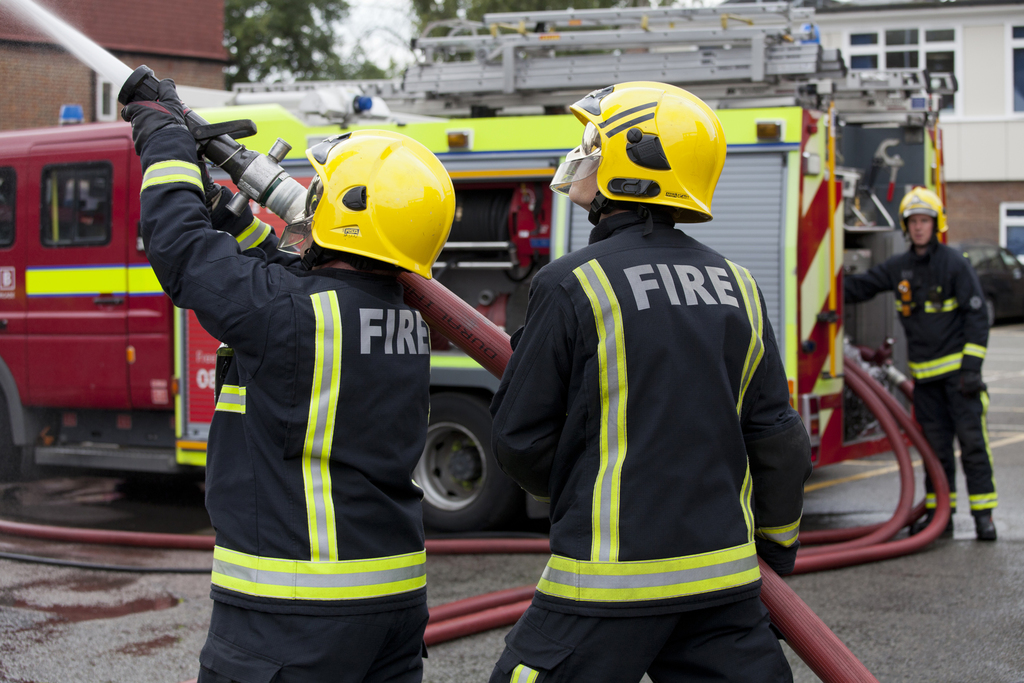 The research work is a UK ‘first’ and the latest in a growing body of international evidence suggesting an increased risk of firefighters developing cancer and other diseases. Fires produce a cocktail of toxic, irritant and carcinogenic chemicals in the form of aerosols, dusts, fibres, smoke and fumes or gases and vapours.

The report includes a summary of UCLan’s testing on-site at no less than 18 separate fire stations as well as over 10,000 responses received to a national firefighter survey run jointly by the FBU and the UCLan.

Indoor air testing at a number of fire stations and training centres highlighted the fact that UK firefighters are still being exposed to high levels of toxic contaminants during and after a fire, with cancer-causing chemicals remaining on PPE, clothing, equipment and elsewhere at the fire ground. Indeed, test samples revealed carcinogens inside firefighters’ helmets, on PPE and even on breathing apparatus mask filters.

More than 10,000 currently-serving firefighters were surveyed in order to better understand UK decontamination practices and the prevalence of illness, with the results duly revealing that 4.1% of the survey respondents had already been diagnosed with cancer compared to less than 1% of the general population. Three-quarters have served for at least ten years with the Fire and Rescue Service before receiving their diagnosis. More than half are under the age of 50 and a fifth under 40.

Tellingly, half of the survey respondents don’t think their Fire and Rescue Service takes decontamination practices (including cleaning PPE and equipment) seriously enough. One-in-five of the survey respondents store their fire gloves in their boots, with the same number storing them in their pockets. One-in-ten store their fire gloves in their helmet, risking the transfer of toxic contaminants directly to the skin.

Nearly half of the survey respondents feel that there’s a ‘Badge of Honour’-style attitude in the Fire and Rescue Service, and particularly so when firefighters emerge from fires with contaminants on their PPE or face.

Scientists have created a Best Practice guide for Fire and Rescue Services, putting forward a number of urgent recommendations to minimise firefighters’ exposure to toxic fire effluents. Some of the advice contained within includes:

*Every Fire and Rescue Service must implement fully risk-assessed decontamination procedures en route to, during and after fire incidents, and also ensure that all relevant staff are trained in implementing these procedures

*Fire and Rescue Service personnel should receive regular and up-to-date training on the harmful health effects of exposure to toxic fire effluents and how these exposures can be reduced, minimised or eliminated

*Firefighters should wear respiratory protective equipment at all times while firefighting, including after a fire has been extinguished, but is still ‘gassing off’

*Firefighters should shower within an hour of returning from incidents

In most states in Canada and the United States, presumptive legislation recognises certain cancers as occupational diseases amongst firefighters. Here in the UK, it has so far been concluded that there’s not enough evidence to link occupational exposure to carcinogenic fire effluents and the higher risk of cancers. This means that, if a firefighter believes their illness is work-related, they’re required to prove it – an almost impossible retroactive task.

Ahead of the report’s publication, the Environmental Audit Committee recommended that the Health and Safety Executive implement its report’s recommendations on improving firefighters’ work environments. In response, the Government confirmed that it would instruct the Health and Safety Executive to monitor the research and ensure Fire and Rescue Services identify risks to firefighters.

This Best Practice report is the first stage of ongoing research examining the link between firefighters’ exposure to toxic fire effluents and the risk of cancer and other diseases.

Matt Wrack, FBU general secretary, said: “Firefighters risk their lives every day to keep their communities safe, but it’s clear that the risk posed to their health doesn’t stop when the fire has been extinguished. Sadly, we often see serving and former firefighters suffer from cancer and other illnesses. Every firefighter knows the fear that, someday, they and their family could receive the devastating news, but we’re determined to do all we can to reduce the risk of firefighters developing these terrible diseases as a result of their job.”

Wrack added: “There are some hard truths for Fire and Rescue Services in this report. Far more needs to be done to protect firefighters from cancer and other illnesses. Among firefighters themselves, there are still some myths to dispel, which is why regular and up-to-date training on the risk posed to their health is so essential.”

He continued: “This research is a crucial first step towards definitively proving the link between firefighting, toxic contaminants and cancer here in the UK. The Health and Safety Executive must urgently implement the recommendations to bring life-saving measures into place as soon as possible.”

Anna Stec, professor in fire chemistry and toxicity at the UCLan, observed: “These recommendations are vital if we’re to improve firefighters’ health and well-being, keep them safe and prevent exposure to toxic chemicals, which can lead to life-changing problems or even premature death. The recommendations must be implemented swiftly to reduce the health risks firefighters face.”

Stec concluded: “This report highlights some of the risks and sources of contamination that firefighters are exposed to on a regular basis and how these can be controlled. We hope that this guidance will be adopted and used by the fire sector across the UK and beyond such that the overall exposure of firefighters and their families is reduced.”