Firefighters have voted in favour of industrial action short of strike to commence on 24 December, running for six months. 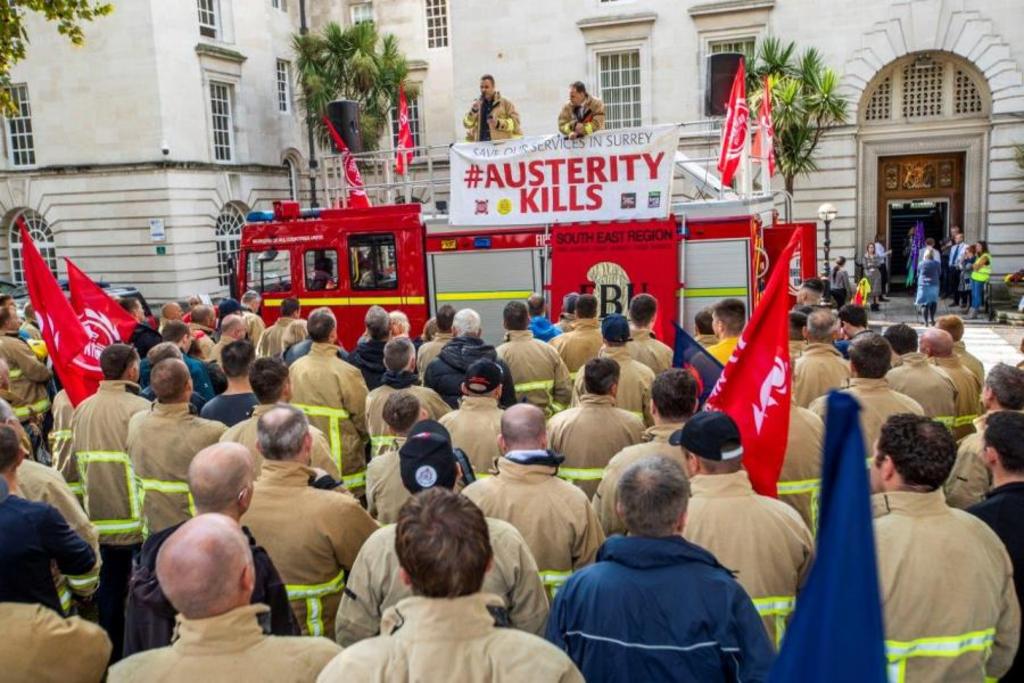 94% voted in favour of action, with 72% of Surrey Fire Brigades Union (FBU) members turning out, after exhausting all other avenues of fighting dangerous cuts to Surrey Fire and Rescue Service (SFRS). The overwhelming turnout and vote for action far exceeds the thresholds needed by unions to hold industrial action.

The action short of strike will include a ban on overtime, on which SFRS has become dependent, as well as a refusal to stand in for understaffed senior roles and a refusal to use non-operational vehicles, including the use of firefighters’ private vehicles for brigade purposes.

Lee Belsten, FBU Surrey brigade secretary, said: “We’ve done everything else in our power to stop these dangerous cuts and have no choice but to resort to industrial action. The council and fire service bosses have ignored the concerns of residents and the professional advice of their firefighters for too long.

“Underfunding has become endemic in SFRS, with bosses depending on the goodwill of firefighters in a failed attempt to meet basic standards. Our goodwill has run dry.

“We’ve had huge support from the community so far in our campaign and we ask that Surrey residents stand with their firefighters through this difficult period. These cuts will make all of us less safe.”

Matt Wrack, FBU general secretary, said: “The horrendous fires we’ve seen in recent years clearly have not resonated with Surrey politicians and fire chiefs. They don’t seem to care about the safety of their residents in the slightest.

“Surrey County Council have insisted that the cuts are not financially driven, so we’re calling on them to increase the staffing levels to crew all of Surrey’s fire engines 24/7, rather than cutting seven engines to meet the current staffing level.

“Firefighters across the country stand in solidarity with our brothers and sisters in Surrey. This is not the Christmas many firefighters will have planned for, but we must do everything necessary to protect our fire and rescue service.”

The cuts, which include removing seven fire engines at night-time and cutting 70 firefighter posts, were approved by Surrey County Council at a cabinet meeting on 24 September. 68% of respondents to the official consultation opposed cuts to fire cover, with just 18% approving.

Over 13,000 people signed a petition calling on the council to scrap cuts, but the council ultimately voted them through.

This year has seen the steepest rise in Surrey fire deaths in over a decade. Staffing shortages in Surrey have left fire engines unavailable to respond to emergency calls over the last year, resulting in slower response times as crews often have to travel from neighbouring counties.