The latest issue of SSAIB’s The Standard is being released with the April edition of Fire Safety Matters and the brand new Security Matters magazine, thanks to the continued partnership with FSM publishers Western Business Media Limited. 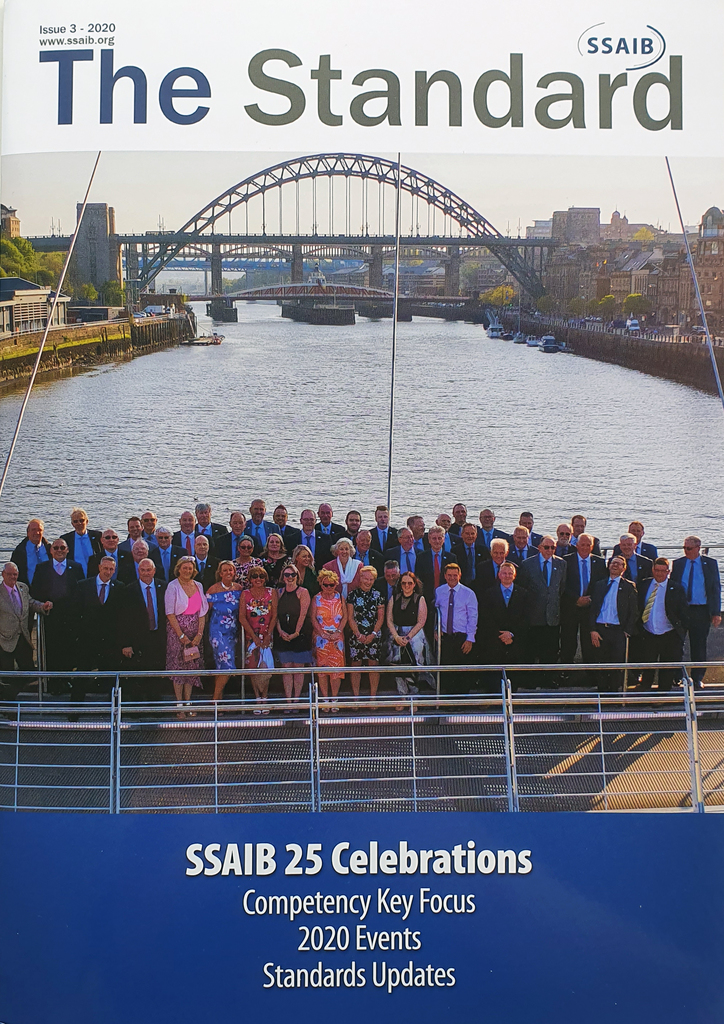 Due to the link-up – which is now in its third year, following the re-launch of the leading certification body for the fire and security industries’ annual news publication – all of SSAIB's registered firms will receive both magazines to their registered address free of charge, to give some much-needed reading material in these times of social distancing and self-isolation.

As expected, last year’s SSAIB 25 celebrations feature heavily in this edition. There is an insight into the many occasions that SSAIB and the industry celebrated SSAIB’s quarter-century of success, a centre-fold photo gallery showing just some of the highlights and a very special cover image featuring all of the SSAIB staff, auditors and board members – after all three aspects of the organisation met up for the very first time to commemorate SSAIB 25 last May.

It’s not all made up of retrospective content though, with Security systems scheme manager Frank Smith discussing his first year in his new role and his thoughts on the security industry as we enter the 2020s. Training manager Trevor Jenks also reveals how employers can counter-act the effects of the increasing skills gap across the industry by taking on apprentices and upskilling their staff.

Chief executive Alex Carmichael also returns with his A View from the Top column, while field operations manager David Roscoe doubles down with both the latest standards updates for both the UK and Republic of Ireland – in addition to questioning why very few Alarm Receiving Centres have moved to the latest European Standard.

Staffordshire-based ADB Alarms are the latest SSAIB registered firm to go Under the Spotlight, with sisters Samantha Bennett and Sarah Savigar discussing all aspects of their business, the industry and their attendance at the SSAIB 25/Women in Security Awards joint celebration back in September 2019.

SSAIB lead auditor Stephen Grieve summarises his involvement with the London Borough of Islington and their various surveillance camera systems – as well as describing the SSAIB’s certification process for the Surveillance Camera Commissioner’s Code of Practice.

BAFE chief executive Stephen Adams contemplates a new era of competency, following a decade that has seen it become a key area of focus with the fire industry, while the FIA also explain how they can help SSAIB’s security firms to become more competent on the fire side and achieve third-party certification.

As the official Installer Partner for IFSEC and FIREX, SSAIB also welcome IFSEC Global editor James Moore to consider the many reasons for attending industry exhibitions and how they can be hugely beneficial to your business.

The traditional scheme updates from relevant scheme managers are also included, alongside the latest SSAIB news and a focus on some of the exhibitions and events that SSAIB will be attending this year.

PR and communications executive - and editor of The Standard - Glen Maxwell commented: “SSAIB 25 features heavily in the coverage of this year’s magazine and rightly so. However, that’s just the tip of the iceberg really and we’ve been able to put together a great mix of contributors for this latest issue.

“After producing a bumper edition of The Standard last year, we were delighted with how it turned out and – having been impressed by the size and overall look of the “bumper” edition – we decided to embrace the “bigger is better” philosophy and make that size the standard for The Standard going forward.

“That has allowed us to fit a lot more content into the magazine for 2020 and, following the fantastic feedback that both of the previous editions of The Standard we’ve had, I hope that this year’s effort is as well-received as its predecessors.”

The Standard will also be available to pick up at SSAIB’s regional meetings and all of the exhibitions that the UKAS-accredited certification body will be attending in the next 12 months. However, as a first for 2020, an online version of The Standard is also available at http://archives.westernbusinesspublishing.co.uk/fsm/digital-archive/issues/2020/ssaibthestandardissue3/index.html