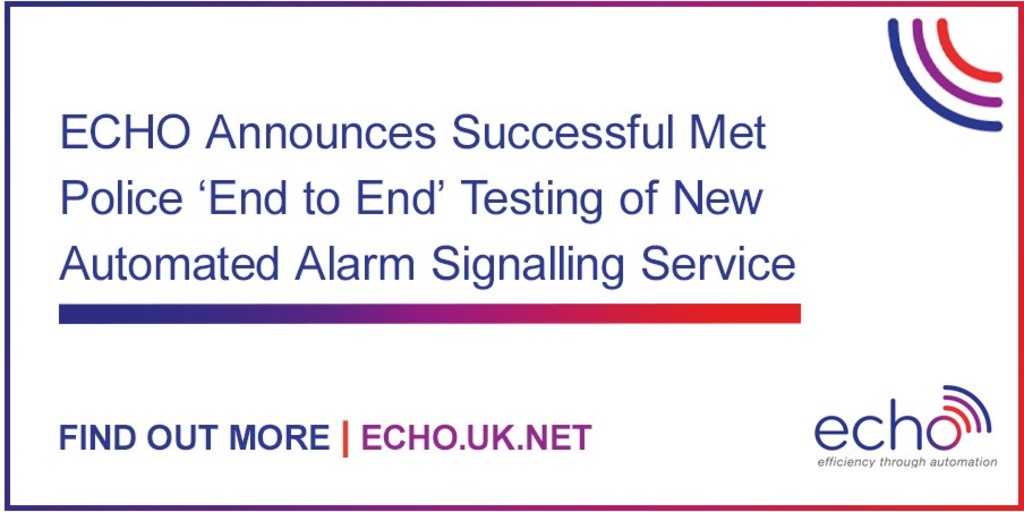 This success follows hot on the heels of the test by Essex Police who, in November last year, became the first police force in the UK to have successfully received and verified confirmed signals in this way.

ECHO is going live early on this year, offering a full service to any UK police force that’s ready and able to be ECHO-connected. It’s expected that Essex Police and the Metropolitan Police Service will be fully prepared to handle all police response alarm signals via ECHO by the time that Q2 2021 arrives.

David Mair, manager of the Security Systems Unit at the Metropolitan Police Service, said: “We’ve been developing our capability to receive automated verified alarm signals from Alarm Receiving Centres for some time. This proof of concept means that all alarms with Metropolitan Police Service response could be ECHO-connected and in line for faster police response before the end of this year.”

Martin Harvey, director of ECHO, added: “We’re delighted to see yet another successful milestone test for ECHO. Connection to the Metropolitan Police Service Control Room will enable a significant number of professionally installed and monitored alarm systems to be connected through the ECHO hub, further demonstrating the capabilities of the ECHO platform handling signals from multiple Alarm Receiving Centres and transmitting them to any number of ECHO-connected police forces. 2021 is set to be a busy year for ECHO as more police forces are poised to connect to the service.”

The National Police Chiefs’ Council estimates that ECHO-connected police forces will save between one and four minutes in responding to intruder and hold-up alarm activations. Time saved by the police service being ECHO-connected could be crucial, allowing officers to provide a faster response to confirmed alarm activations from approved alarm installations.

Mike Reddington, CEO of the British Security Industry Association (BSIA), has been appointed to ECHO’s Board of Directors with immediate effect.

Reddington’s appointment comes after Dave Wilkinson stepped down in December to focus on key activities in his ongoing role of director of technical services at the Trade Association. Wilkinson helped to found ECHO in August 2017, subsequently cultivating the business concept from inception to the verge of full service delivery later on this year.

Martin Harvey explained: “Armed with over 25 years’ commercial experience in the security sector, Mike strengthens the ECHO Board with further business leadership expertise. His background, including time spent at leading blue chip organisations such as Honeywell and ADI, will be invaluable as ECHO moves into full service delivery.”

On his appointment, Reddington told Security Matters: “I look forward to working with the other Board directors of ECHO in progressing the next phase of this project as we move into the implementation of the service for end users and the industry, in turn realising the benefits of the improvements in confirmed alarm activation transfers to police authorities.”

Harvey concluded: “We would like to take this opportunity to recognise Dave’s contribution to ECHO. Without his input, the project might not have succeeded. His unwavering commitment over many years as a founding member has been immense. The industry owes him a great debt of gratitude.”