NEW AERIAL ladders that are more responsive to drive, faster to set up and harbour greater rescue capabilities are soon to hit the streets of London as the London Fire Brigade (LFB) continues to improve its ability to deal with high-rise incidents. 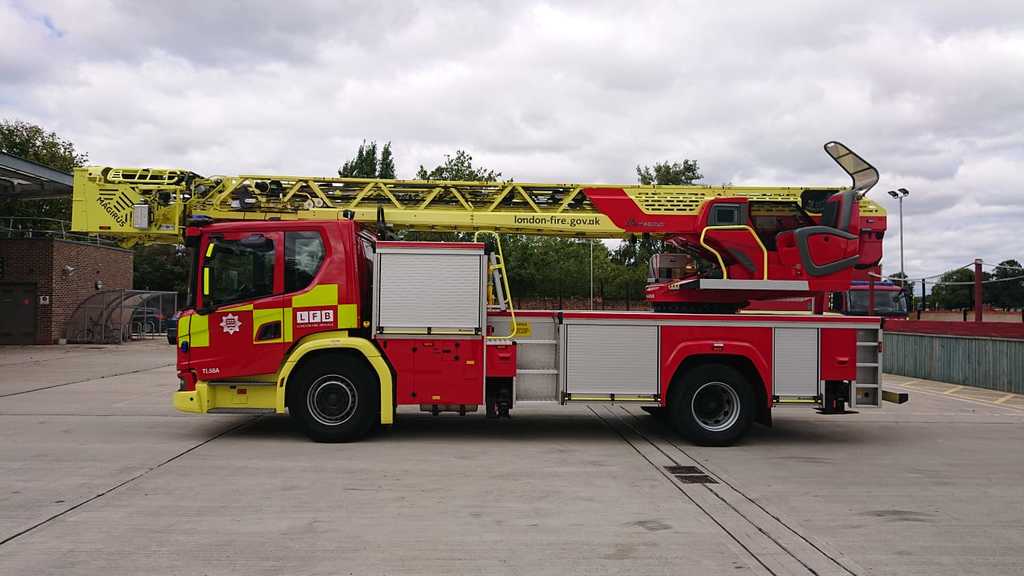 Twelve new 32-metre appliances known as ‘turntable ladders’ are part of the aerial replacement project and have many improvements on the existing fleet, the biggest being that the ladder articulates, allowing for greater manoeuvrability. The articulating top section means that, down London’s narrow streets, the turntable ladder can now set up closer to the building than previous aerial appliances. The reach obtained also means that the machines can be placed further away and overcome obstacles which would otherwise have been problematic.

The new turntable ladders are swift and responsive to drive and can reach their top working height within a minute from the moment of arrival at an incident. Other features include a detachable thermal imaging camera and improved stretcher capabilities, both of which will enhance operations at height. They will also improve capabilities for lighting and observation of emergencies from above, giving incident commanders greater knowledge from the sky.

Turntable ladders are used by the LFB for a wide range of tasks such as aerial water towers to put water on buildings from height, rescues, high-level lighting and also as observation platforms. The new engines will be highly visible on London’s streets with their bright yellow ladder, bumpers and fenders. They also have driver aides like pre-emptive braking and lane change technology.

London Fire Commissioner Andy Roe said: “Our new aerial ladders are more responsive, quicker to set up and improve our ability to fight fires and rescue people from height. Our determination to have them working on London’s streets despite the challenges COVID-19 has presented to us shows our commitment to improve our response, especially so when it comes to high-rise incidents.”

Training has been able to start on the new turntable ladders due to the hard work of LFB staff and in close liaison with the Fire Brigades Union to make sure it can be done safely during the pandemic. The courses were completely revamped to make sure safe procedures are in place, including the wearing of masks during driver training, increased open air training and regular sanitation of delegates’ hands and the machines themselves. Internal training venues were found quickly to make sure staff didn’t need to travel long distances and so the risk to those involved could be reduced.

Firefighters have also been incredibly flexible, attending courses at short notice to make sure the vehicles become operational as soon as possible. The LFB’s training provider Babcock has made additional machines for training available such that multiple venues can be used, allowing for increased training while maintaining social distancing.

In addition to these new 32-metre turntable ladders, the LFB will soon have three 64-metre ladders available and these will then be the tallest in the country. Following tests and operational training, the appliances are expected to be in service in the New Year.