ANDREW SILKE, Pool Re and Cranfield University’s Professor of Terrorism Risk Management and Resilience, has produced a detailed report assessing the short and long-term impacts and potential consequences of COVID-19 on terrorist actors, target types and methodologies. The detailed eight-page report asserts that the pandemic is already exerting a significant impact on terrorism in a variety of ways. 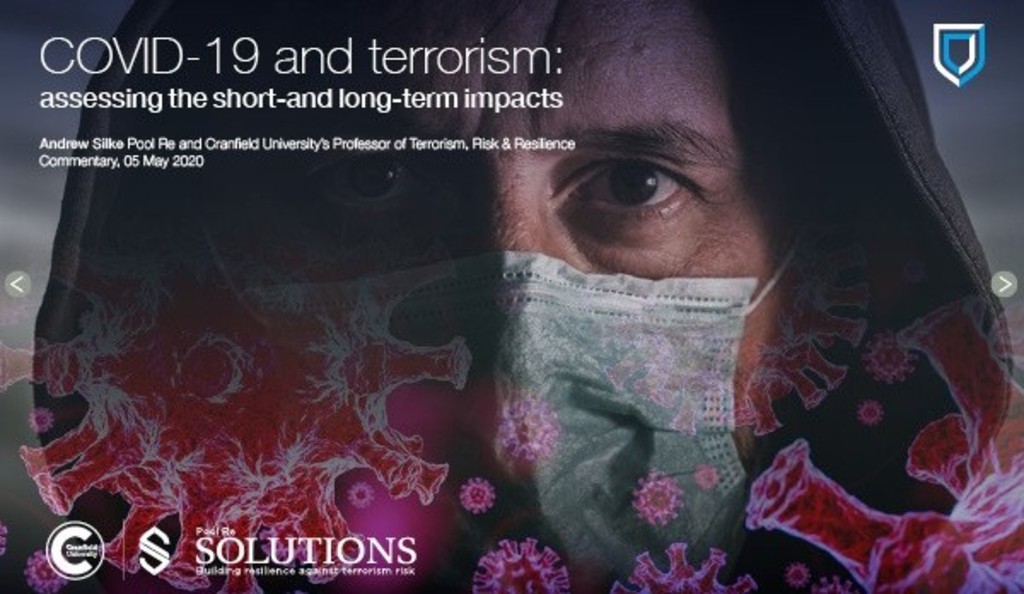 As the international community continues to grabble with the COVID-19 pandemic, it's already clear that the economic and social impact of the Coronavirus outbreak will be deep and long-lasting. Evidence suggests that COVID-19 is already having an impact on terrorism trends across the globe, with Silke considering in more detail the potential impact of the pandemic on terrorism threats and trends not only at the height of the crisis, but also looking ahead to the medium and long-term.

There's a mixed picture on the level of attacks in the short-term. Lockdown measures will tend to inhibit attacks, but terrorist propaganda calling for attacks (while the authorities are distracted, etc) will incite some incidents.

Much propaganda – and particularly that connected to far-right extremism – is focusing on conspiracy theories connected to COVID-19 and this has already inspired plots and attacks. For its part, Islamist extremist propaganda is focusing more on the vulnerability of Government opponents distracted by the pandemic and the opportunity this presents for attacks.

There has been a significant increase in online extremist activity of late, raising the risk of increasing short-to-medium term radicalisation. Further, there are strong long-term concerns that states weakened by the serious economic consequences of the pandemic will be more vulnerable to the emergence/resurgence of terrorist groups in many parts of the world.

According to Silke, the pandemic is likely to have a mixed impact on terrorism trends in the short term. “At one level, as societies move towards and remain in lockdown phases, we can expect that this will, overall, be associated with a reduction in real-world terrorist attacks in those societies which have the infrastructures to facilitate and enforce a widespread lockdown. Social distancing and other lockdown measures will make it more difficult for terrorists to move in public and to conduct many types of preparation for attacks. Evidence is already showing substantial drops in certain types of crime as a result of lockdown measures. The UK is seeing major drops in the reporting of murder and serious violent crime, rape, robbery, domestic burglaries, motor vehicle theft and shoplifting. Similar statistics are also emerging from other countries which have introduced comparable lockdown measures.”

Silke believes these decreases are likely to be short-term. “We can expect a substantial increase once the lockdown measures are relaxed and a return to normal work and social activity begins. While terrorists may be more restricted than usual in terms of preparing and carrying out real-world attacks, we can expect some displacement to other types of activity and particularly so with regard to online activity.”

Research by Moonshot CVE has found that online engagement with extremist right-wing content increased by an average of 13% following the introduction of social distancing and other lockdown measures in the US. The longer the lockdown measures persisted, the higher the level of engagement rose (increasing to 21% on pre-lockdown levels after ten days of lockdown). Other research suggests that there has also been an upsurge in Islamist extremist online activity, with a rise reported on Islamic State-related or inspired material.

The long-term economic impact of the pandemic looks set to be very serious. The UK Government, for example, has already committed over £50 billion in funding to mitigate the impact of the pandemic and faces an extra budget deficit of approximately £200 billion anticipated as tax revenues fall and the level of Government spending increases. These figures, though, are still relatively initial estimates of the economic impact and, the longer the crisis lasts, the steeper the economic costs become.

Silke commented: “At this stage, most economic analysts accept that a serious global recession seems inevitable. Further, there are substantial concerns that the current outbreak is merely the first of a potential series. If COVID-19 follows the pattern of some previous pandemics, we may experience equally serious waves later this year or next year, each adding further to the economic burden. As it is, developed economies in countries such as the UK and the US have deep pockets, but will still be economically rocked by the crisis in a manner that's expected to be worse than the 2009 economic crash, and possibly on a par with the Great Depression in the 1930s.”

One potential consequence of all this that funding for counter-terrorism activity across Government and the private sector may be scaled back in the face of massive economic pressure. In the UK, following the economic crash of 2009, Government spending on counter-terrorism was largely protected and generally emerged intact from a series of austerity budgets.

Subsequently, the major rise of Islamic State-inspired terrorism from 2014 onwards, marked by high-profile attacks in London and Manchester, emphasised the need for maintaining investment.

“Looking ahead in the medium and longer term, Government spending is likely to come under fiercer stress than in the past decade and pressure on counter-terrorism budgets going forward is likely to be more intense. Whether these budgets can continue to be ring-fenced as before is uncertain. Tied into this, the economic impact of the pandemic is almost certainly going to feed into destabilising parts of the world. Countries with less resources may face even greater crises. Potential terrorist hotspots overseas may re-ignite as international co-operation and investment to suppress terrorism is weakened given that resources will be diverted to other priorities.”

Silke continued: “Failed states are unlikely to experience significant improvements in the context of a widespread global recession. On the contrary, they are at risk of sinking deeper into the morass. Similarly, currently vulnerable states may succumb to the fresh range of challenges and slip into failed state status in the medium term. Combined, this may offer a range of terrorist movements new safe havens to organise and launch campaigns of violence.”

Concluding his excellent assessment of the current situation, Silke observed: “Overall, while some terrorist propaganda has been focused on immediate opportunities for attacks, the heavy economic impact of COVID-19 suggests that serious long-term vulnerabilities lie ahead. Terrorism is only one of the problems that Governments will have to address. At an international level, it's difficult to envision that the wider budgets to tackle terrorism and violent extremism can remain as strong as they were. As the economic consequences of the pandemic bite both directly and indirectly, it seems likely that many regions will become increasingly vulnerable to the emergence or resurgence of a range of terrorist groups.”

*Copies of the full report entitled 'COVID-19 and Terrorism: Assessing the Short and Long-Term Impacts' are available to download at https://www.poolre.co.uk/wp-content/uploads/2020/05/COVID-19-and-Terrorsim-report-V1.pdf