Four Years On From The Grenfell Tower Fire: The ASFP’s Perspectives

FOUR YEARS on from the Grenfell Tower disaster we mourn those who died, writes Reece Goodman, but also take stock of what has happened since then. 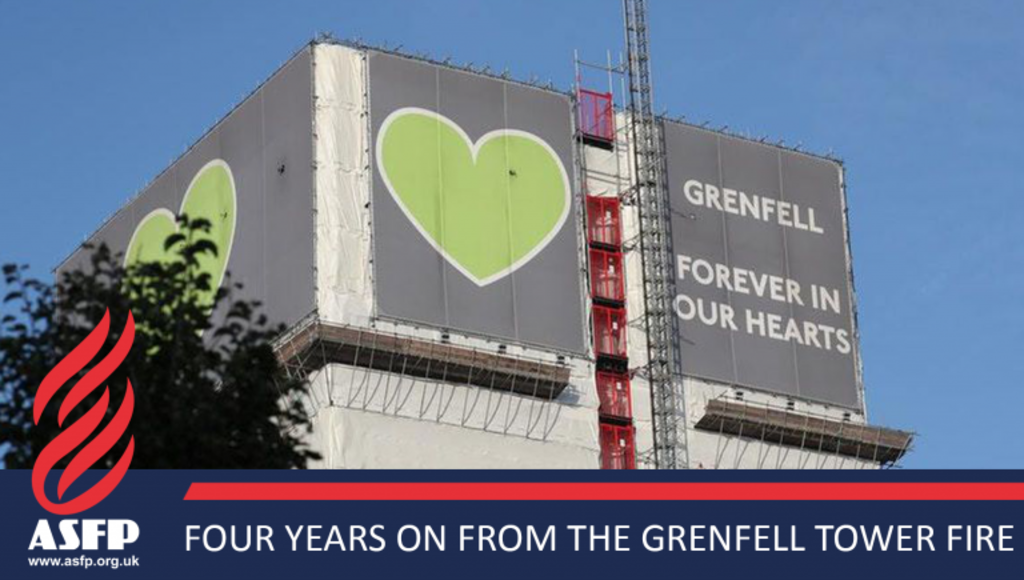 On the positive side, we have the Fire Safety Act which brings flat front doors and external walls into the scope of fire risk assessments under the Regulatory Reform (Fire Safety) Order 2005. While this development is long overdue, many risk assessors did cover flat front fire doors with varying degrees of success, but the enshrinement in legislation and the proposed frequency of fire door checks can only be welcomed.

The inclusion of external walls was not really a big issue until we started cladding buildings, effectively making their reaction to fire performance much worse. This was something first highlighted with significance in the wake of the Lakanal House blaze which killed six people in 2009, but which was not adequately acted upon by the Government at the time despite warnings being issued on the matter.

We also have the Building Safety Bill which is presently working its way through Parliament. There is much to commend within this proposed legislation, including the setting up of a new regulator and especially so the three Gateway stages which stop further progress unless certain conditions are met.

Gateway 2 (permission to build) should stop or otherwise significantly reduce the use of design and build-type contracts that give rise to poorly designed buildings, into which it is difficult to install adequate passive fire protection. The inclusion of specific duty holders will concentrate minds and prevent much of the buck passing, not to mention the assumption that it is the responsibility of others. The latter is a depressingly common feature of the Grenfell Tower Inquiry testimonies.

On the negative side, bringing external walls into the scope of fire risk assessments realises the problems around a lack of skilled assessors and the associated knowledge required to be able to transact what is a difficult and complicated job sometimes performed at height.

Methods are being developed to deal with this, but the draft PAS 9980 on the evaluation of external walls is still a work in progress. There are many comments that need to be reviewed. The definition of ‘buildings in scope’ which relies on height must be broadened into total risk. Height is important, but this is not the only arbiter.

Then there is the cladding crisis. Pushing the Fire Safety Bill through to become the Fire Safety Act 2021 without actioning the proposed amendment to prevent leaseholders from having to pick up the costs of remediation will leave a generation of people whose dreams of property ownership may be shattered with huge bills and potentially facing bankruptcy for something that was not their fault. The grapevine suggests the delays to the Building Safety Bill are to allow a more acceptable solution to be arrived at. Let’s hope so.

Finally, in considering the fire safety of the built environment, it’s not just about cladding. The ASFP was paid by the equivalent of the Ministry of Housing, Communities and Local Government to prepare a report – in conjunction with the Building Research Establishment and Warringtonfire – on the passive fire protection of some representative large public buildings. The report concluded that there were widespread deficiencies in fire protection not usually visible and  caused by poor design, the use of unskilled labour and corner-cutting to assuage the ‘cost is all that matters’ ethos of the construction industry.

The report concluded that there might well be a catastrophic fire associated with these issues if they were not addressed The report was dated 2003‘ Let nobody say deep-seated fire safety problems were not known about. They were and concerns were duly raised, but in a climate of falling overall fire deaths, they seemingly fell on deaf ears.

Ultimately, it’s so important to ensure that proper passive fire safety measures are built into buildings. They are the bedrock of fire safety, not just now as we mark the fourth anniversary of the Grenfell Tower fire, but always.