TWO CAMPAIGNERS have won permission from the High Court to challenge the Government’s refusal to ensure that all disabled people can safely evacuate from high-rise blocks of flats in emergencies. 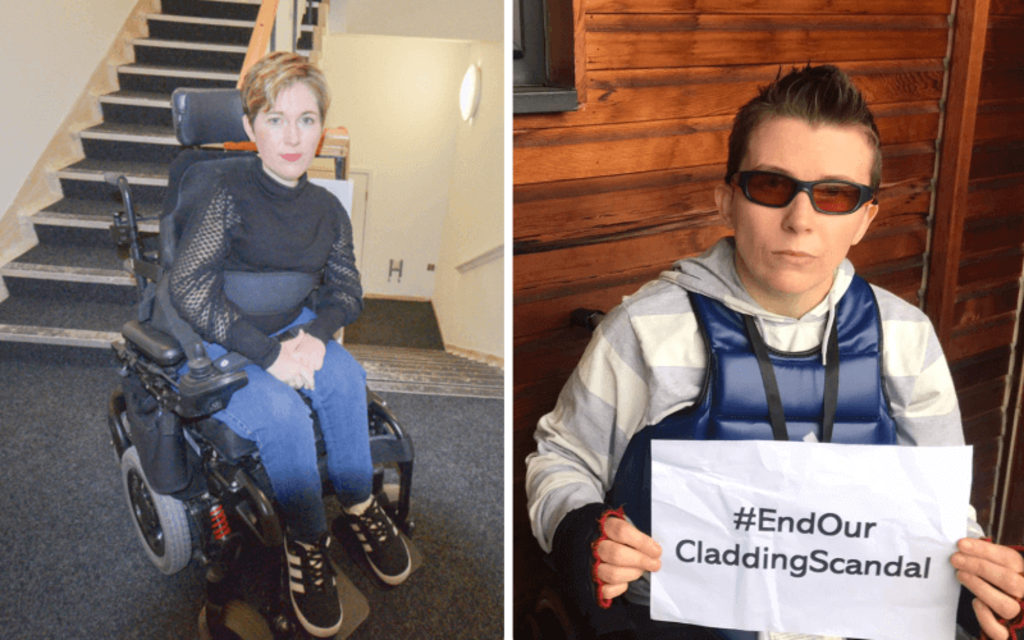 John Pring (Editor of the Disability News Service) has reported that Georgie Hulme and Sarah Rennie – the co-founders of the disabled-led leaseholder action group Claddag and both wheelchair users who live in high-rise buildings – have been told they can apply for a judicial review of the decision made by former Home Secretary Priti Patel.

Patel rejected the Grenfell Tower Inquiry’s recommendation that all owners and managers of high-rise residential buildings should be forced to prepare a Personal Emergency Evacuation Plan for all residents who might find it difficult to “self-evacuate”. That rejection – made on the grounds of “practicality, proportionality and safety” – came despite a promise from (then) Prime Minister Boris Johnson that he would implement all of the recommendations from the Grenfell Tower Inquiry’s first phase.

Hulme and Rennie have now been granted permission to seek a judicial review of the decision and have been told they have an “arguable” case. It’s hoped that their legal challenge will be heard by the end of the year.

The judge who heard their application has also agreed to cap their costs such that, if they lose their case, they will have to pay a maximum of £20,000 towards Home Office costs, as well as court fees that are likely to be no more than £1,500.

The Claddag action group has so far raised nearly £16,000 through a crowdfunding appeal to cover the costs, but still needs to raise a further £5,500 to continue with the case. Claddag’s solicitor Bhatt Murphy is working on a ‘no win, no fee’ basis. If Rennie and Hulme are successful with their case, all of the unused donations will be returned.

Hulme told the Disability News Service: “While permission being granted for a hearing is great news, the fact that the Government needs to be held to account in this way is sadly another example of how it considers disabled, deaf and older people’s lives as less worthy.”

Hulme added: “We appreciate the devastating impacts of both the cost of living crisis and the building safety crisis, but any small donation will help us, as a community, to have our day in court.”

The Government’s rejection of recommendations for Personal Emergency Evacuation Plans emerged even though those who responded to a consultation on the proposal overwhelmingly supported their introduction.

The Home Office is now consulting on its own “alternative package” of measures, which it calls Emergency Evacuation Information Sharing. This does not go as far as Personal Emergency Evacuation Plans and will only apply to the minority of buildings that have been assessed as being at higher risk.

The Grenfell Tower fire in June 2017 led to 72 people losing their lives, including 15 of Grenfell’s 37 disabled residents. The tragic episode followed years of failure to plan for how disabled people living in the London tower block would evacuate if they needed to do so.

Rennie and Hulme believe the Home Office’s decision to reject the Personal Emergency Evacuation Plan proposals breaches its duty to protect life, as well as its duty not to discriminate against disabled people under the European Convention on Human Rights, not to mention the Government’s public sector equality duty under the Equality Act.

The campaigning duo also believe the consultation process on the Personal Emergency Evacuation Plan proposal was unfair because the Home Office later held follow-up meetings with representatives of local authorities and housing associations, allowing those individuals to raise concerns to which Claddag and others had no chance to respond.

John Pring has pointed out that the Home Office said it would not be appropriate to comment on any ongoing legal proceedings.

*Further information is available on the Disability News Service website