The Fire Protection Association’s (FPA) Building a Safer Future Seminar, held on 27th January in London, continued the ongoing discussion of competency within both the combined construction and fire safety industries. 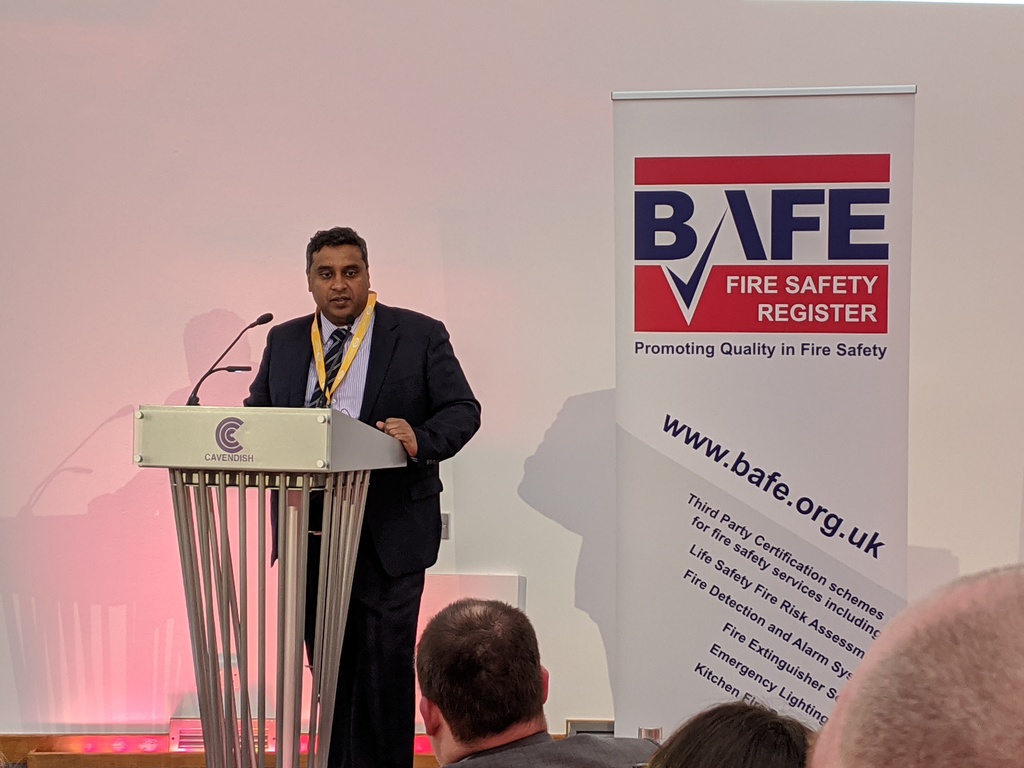 Chair of the event and managing director of the FPA, Jonathan O’Neill OBE, opened the seminar affirming his continued “whole-hearted” support for Third Party Certification and that he has “been banging the drum for long enough on behalf of the FPA, and was delighted when the Fire Sector Federation decided to adopt Third Party Certification being one of its policy objectives in the forthcoming Building Regulations review”.

Chandru Dissanayeke, director of Building Safety Reforms - MHCLG, began with his presentation explaining that his role since Grenfell has been to revisit the terrible events that unfolded on 14th June 2017 every day. He stated this was “exhausting and emotionally draining” but strongly emphasised that it was important, as an event like Grenfell should “never happen again”.

He added: “Phase 2 of the Inquiry will examine the circumstances and causes of the disaster, including how Grenfell Tower came to be in a condition which allowed the fire to spread in the way identified in Phase 1.” - https://www.grenfelltowerinquiry.org.uk/news/update-inquiry-24

Mr. Dissanayeke also discussed the new building safety programme and that it will be “delivered through measures to make existing buildings safer now and reforming the system for the future for new and existing buildings”. As at the UK Construction Week in October 2019, he underlined his presentation with the fact that this is our legacy to protect future generations. He was very conscious that there is a desire for change and an impatience for Government to “get on with it” – referring to Jonathan O’Neill’s speech from the FPA’s Fire Sector Summit back in November.

Mr. Dissanayeke said that Third Party Certification has a part to play in demonstrating the quality of designers, installers, maintainers and the materials used. It was described as a very good tool, but Government needs help and requires the [construction and fire safety] industry to step up and lead the way.

Douglas Barnett, chairman – BAFE, opened his presentation stating, other than leaving the EU on Friday (31/01/2020), this date marks the 16th anniversary of the Rosepark Care Home fire and questioned if lessons had been learned from this event. The Rosepark Care Home fire in 2004 killed 14 elderly residents. Mr. Barnett argued very little action has been taken in those number of years [other than Scotland requiring sprinklers in new care homes and guidance from the Regulation and Quality Improvement Authority (RQIA) in Northern Ireland distributing information on using competent fire risk assessors]. He stressed we need to push Government, and the industry needs to work on this.

Coming from the insurance sector (as director of customer risk management – AXA), Mr. Barnett stated that “competence is a massive, massive issue.” He continued “there’s got to be an increase of recognition for competence and all elements of competence”. He noted the benefits of UKAS Accredited Third Party Certification pointing out the three key areas in gaining this and demonstrating competence: knowledge, skill and attitude. He stressed without the right attitude, it all falls down. “People have got to buy in to doing the right thing… Have you got the right attitude when you’re actually looking at what the client’s asking you to do?” Having all three elements of this “demonstrates a commitment to quality for the end client”.

Mr. Barnett also defined “not every Third Party Certification scheme is the same” and later discussed UKAS (United Kingdom Accreditation Service) who ensure the ‘checkers’ (i.e. Certification Bodies) are appropriate and can suitably assess the contractor to determine said competence.

Mr. Barnett noted “one thing that Jonathan [O’Neill] and the Fire Sector Federation did was look at statutory defence. This is actually a very quick win for legislators - is there a statutory defence if a building owner/manager has done as much as they can by using appropriate Third Party Certificated contractors?” Mr. O’Neill added at this point, “the barrister came back with this his advice and said he thought it would be a very easy thing for Government to do… it would simply be a case of incorporating it in guidance. And as far as the Building Regulations were concerned, similarly a quick amendment to Approved Document B would probably suffice.” He continued “now that we are seeing the Government go down the route of choosing the HSE, we are likely to see the adoption of approved codes of practice going forward.”

Dennis Davis, executive officer – Fire Sector Federation, reiterated the areas required to raise the bar of competency. Mr. Davis listed competency as knowledge and understanding, skills and application and reliability and responsibility (i.e. attitude). He noted the task is to bring the industry to acknowledge the three strands of competency and discussed the work of the Hackitt Review CSG (Competency Steering Group) and WG0 (Working Group 0 - Overarching Competence Body).

He supplemented Jonathan O’Neill’s earlier comments in saying “there is a big issue around culture, and I suspect one of the reasons the HSE has been appointed as the building regulator is to drive culture. They were brought in by the Deputy Prime Minister 20 years ago to stop deaths in the construction industry, and they have been extremely successful. And I think this is the same sort of logic to drive a culture through a process".

The seminar also covered multiple other topics including smoke control, toxicity and the implications for the Fire and Rescue Service post Grenfell. Importantly Mark Hardingham, chair of the NFCC (National Fire Chiefs Council) Protection and Business Safety Committee, highlighted his focus. “Although Grenfell Tower has focused our attention on high rise residential buildings, they’re not the ones that keep me awake at night [as his role as Suffolk Fire and Rescue Service Chief Fire Officer] … I’m much more focused around care homes, specialised housing, hospitals, student accommodation and others besides. The risk is there with high rise residential buildings, but I think there are from my perspective some equally significant, sometimes more significant, issues that we’re finding elsewhere in the built environment.”

In the question and answer panels following presentations a question was asked to highlight the “priority items that could be addressed to try and take us forward, quickly and effectively, towards the levels of safety that the recent tragedies have demonstrated we need.” Mr. Davies responded “there are definitely quick wins. One quick win for example is Third Party assurance. Third Party assurance to us is one of the first steps in eradicating some poor quality and getting standards to a point where at least you know the people who are dealing with this issue, whatever the issue is, understand from a fire safety perspective.”

Frazer Wisniewski, marketing manager – BAFE, who attended the event commented: “The seminar thoroughly discussed the huge topic of competency and the development and scope for a far safer construction and built environment from fire. BAFE will continue to monitor and develop our portfolio of schemes to ensure they remain the best levels of evidence when demonstrating competency of contractors. What is important is to stress, as Mark [Hardingham] touched on, is the discussion of competent fire safety and the need to apply this to all buildings – especially other potential high risk buildings with vulnerable residents such as care homes. High rise residential buildings have focused the attention, and now this needs to continue throughout the existing and new built environment. BAFE will continue to promote the value of Third Party Certification but require further support from the industry to raise public awareness to benefit everyone, from building management to the Fire and Rescue Service and looking forward, the HSE.”

The seminar was sponsored by BAFE.