CAMERON HOUSE Resort (Loch Lomond) Ltd, owner of the five-star Cameron House Hotel located near Balloch, has been fined £500,000 for fire safety failings which led to the deaths of two guests staying at the premises in late 2017. Further, an employee of the company has had an 18-month Supervision Order imposed as well as a Community Payback Order and has also been instructed to carry out 300 hours of unpaid work after admitting Health and Safety failings which started the blaze. 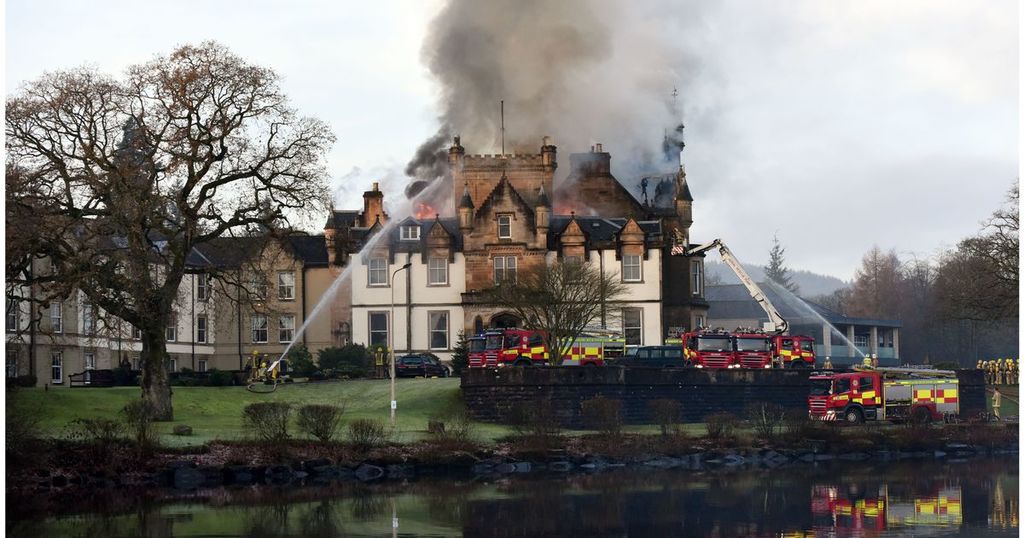 Dumbarton Sheriff Court heard that, in the early hours of 18 December 2017, Christopher O’Malley removed ash from an open fire in the hotel – which is to be found on the banks of Loch Lomond – as part of his duties as a night porter. He then emptied the ash into a plastic bag and put it in a cupboard which contained combustible material including kindling and newspapers.

An alarm sounded at 6.39 am. Members of staff noticed smoke emanating from the cupboard. Shortly afterwards, the fire began to take hold and flames quickly spread. Upwards of 200 guests and members of staff were necessarily evacuated from the premises.

After 8.00 am, it was discovered that guests Richard Dyson and partner Simon Midgley, aged 38 and 32 respectively, were missing. Firefighters eventually recovered their bodies from the second floor. The duo, who had travelled from London to stay at the premises as part of a holiday, were found to have died as a result of smoke and fire gas inhalation.

In an incident that occurred just three days earlier, 35-year-old O’Malley had been told not to put ash into plastic bags.

On 22 August 2017, the Scottish Fire and Rescue Service carried out an audit of the hotel which highlighted the unacceptable issue of combustibles being stored within the cupboard.

A multi-agency investigation involving Police Scotland, the Scottish Fire and Rescue Service and West Dunbartonshire Council took place. This was overseen by the Health and Safety Investigation Unit of the Crown Office and Procurator Fiscal Service. The investigation found that Cameron House Resort (Loch Lomond) Ltd had failed to take the necessary fire safety measures required to ensure the safety of employees and guests and had failed to put in place proper procedures, training and supervision for the disposal of ash and embers from the hotel’s solid fuel fires.

Sentencing O’Malley (of Renton in West Dunbartonshire), Sheriff William Gallacher said: “Your acts on 18 December 2017 caused a fire to start in a cupboard at the Cameron House Hotel. The fire developed from that cupboard and spread to many parts of the building, which had to be evacuated. Some guests managed to do so with relative ease. Some found it more difficult crawling along corridors to avoid smoke. Others had to be rescued by ladder. No doubt some of those who experienced these traumatic events will be affected by them for a long time to come. Two others were unable to escape from the fire and, as a consequence of inhaling smoke and fire gases, tragically lost their lives.”

Sentencing O’Malley to work in the community rather than handing down a custodial term, Gallacher explained: “This is not an attempt by the court to diminish what happened and the tragic loss of life. Rather, it’s in recognition that it was not remotely in your contemplation that anything you did on 17 or 18 December 2017 would have led to the catastrophe which in fact ensued.”

Sentencing Cameron House Resort (Loch Lomond) Ltd, Sheriff Gallacher stated it was “unacceptable” that the hotel’s operators didn’t act on previous advice from the Scottish Fire and Rescue Service to remove combustibles from the cupboard. He concluded: “I do not consider that the company simply disregarded advice and recommendations, but rather that the specific advice and recommendations were translated or interpreted wrongly or incompletely.”

Alistair Duncan, head of the Health and Safety Investigation Unit, commented: “The failings on the part of Cameron House Resort (Loch Lomond) Ltd and Christopher O’Malley led to the deaths of Simon Midgley and Richard Dyson. The tragic loss of these two lives has had a devastating impact on their families and friends. These convictions and sentences are the culmination of a thorough and technical investigation carried out by the Scottish Fire and Rescue Service, West Dunbartonshire Council and Police Scotland, overseen by the Health and Safety Investigation Unit of the Crown Office and Procurator Fiscal Service.”

Duncan went on to state: “This incident should serve as a stark reminder to other companies that failure to implement the necessary fire safety measures can have terrible consequences.”

Stuart Stevens, assistant chief officer of the Scottish Fire and Rescue Service, observed: “This outcome follows a complex and detailed investigation. We extend our deepest sympathies to the families and friends of Richard Dyson and Simon Midgley and all of those affected by the tragic events at the Cameron House Hotel on 18 December 2017. This needless loss of two lives could have been prevented. What happened and the sentences imposed send a very clear message to businesses and organisations across Scotland that fire safety must remain of the highest importance, and that all appropriate measures must be taken to protect the public and members of staff.”

Further, Stevens outlined: “The requirement to act on our advice should not be underestimated. Our enforcement officers will continue to support and advise those responsible for the fire safety of their premises wherever possible.”

Detective inspector Stuart Grainger from Police Scotland concluded: “This has been a lengthy and difficult investigation for everyone involved. Once again, we would like to offer our sincere condolences to the families and friends of Simon Midgley and Richard Dyson. While nothing will ever diminish the pain of their loss, we hope that the conclusion of this case brings at least a small measure of comfort to their families and friends.”