FIRE INVESTIGATION dog Simba has helped bring murderers to justice after finding accelerants had been used at a fatal fire in London. 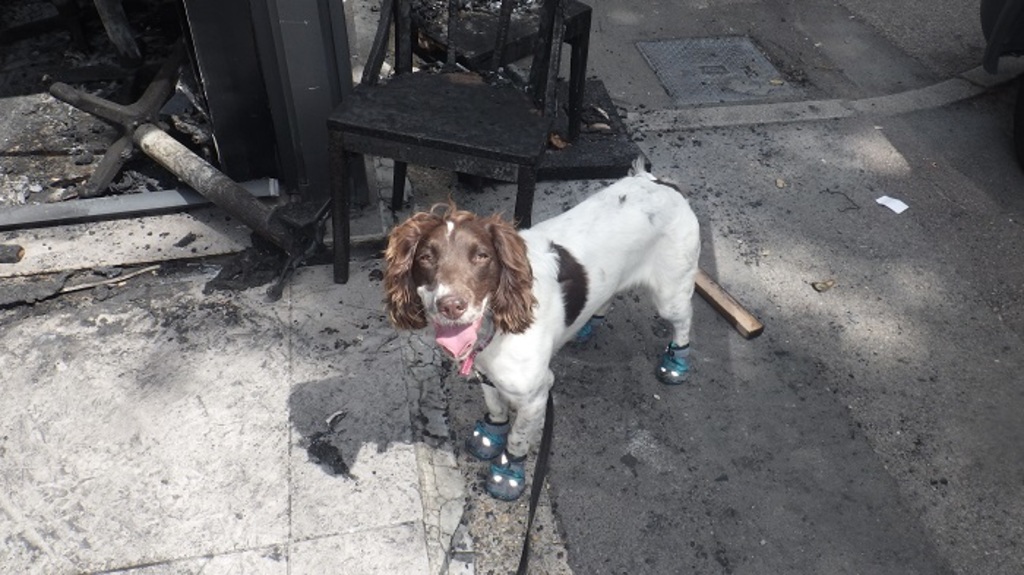 On International Dog Day (August 26), the London Fire Brigade highlighted how important the work of our fire dogs is and how valuable an asset they are to the Brigade.

Fire dogs are used for a range of roles including community events and school visits, but their day job is to help investigate serious fires and gather evidence. Their important work has resulted in convictions.

Simba successfully indicated multiple points where an accelerant was found following a fatal fire at an address in Centurion Square, Woolwich, last year. The victim, from Sierra Leone, had been visiting family when the fire was started deliberately.

The fire started at around 1.20am on 6 September 2018. The Brigade’s 999 control officers took 24 calls to the fire and eight fire engines and around 60 firefighters attended the scene. Two people left the property before the arrival of the Brigade and were taken to hospital by London Ambulance Service. Sadly one woman was found dead at the scene by crews wearing breathing apparatus.

Fire investigators attended and determined the fire to be suspicious. Simba was deployed to help ascertain where the fire started and whether an accelerant had been used to speed up the development of the fire.

The two-year-old springer spaniel is trained to sniff out a number of accelerants, including petrol, whether it’s burnt, evaporated or neat.

Fire investigator Anton Keach, Simba’s handler, said, “Within a matter of seconds of getting to the gatepost, which was about three metres down the path from the front door, Simba indicated that there was something there. The fact that this was quite a way from the door suggested how much accelerant had been used.

“When we went up to the property, Simba identified there had been an accelerant used in other areas up to the door and beyond the front door. He worked very quickly, making it a more effective investigation.

“Without Simba’s keen sense of smell, it would have taken fire investigators a lot longer to identify the areas where the accelerant was found. Some of the things that Simba found may not have even registered using the equipment available to fire investigators.”

Simba and Anton also did an area search to see if the suspects had dropped or discarded anything when they left the scene, as this can often also help the police’s investigation.

Last month, Elliott Robinson and William Smith were both sentenced to life imprisonment with minimum terms of 31 years and 32 years respectively for the murder of the woman who died in the Woolwich fire. Simba’s work at the scene helped with the police investigation.

This year, the Brigade’s two fire investigation dogs, Simba and six-year-old cocker spaniel Sherlock, have searched 41 different fire scenes and in 20 of these cases have identified one of their target substances.

The dogs’ sense of smell is so accurate that in the cases where they did not find anything, there was almost certainly nothing for them to find.