ONE OF the most influential UK firefighters of the past 30 years is retiring from the fire service, leaving it far more diverse than the one he joined in 1990. 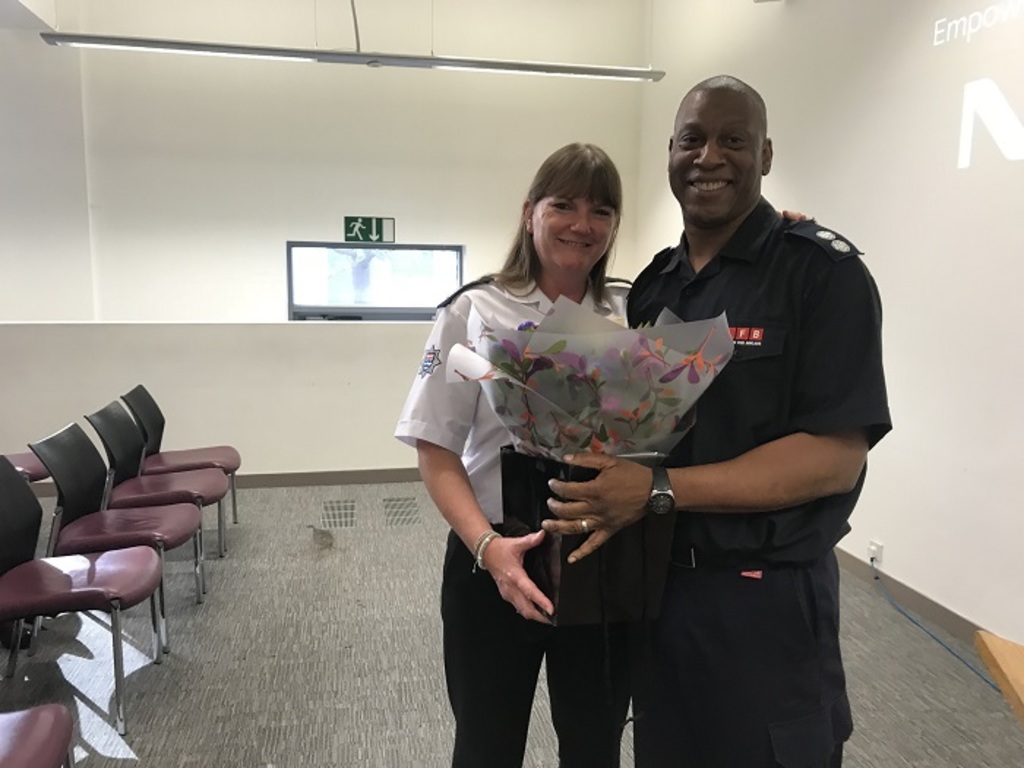 Michael ‘Micky’ Nicholas MBE a Watch Manager and until recently secretary of the FBU’s black & ethnic minority members (B&EMM) helped achieve major changes in the diversity of the Brigade’s workforce but says more still needs to be done to reach out to London’s diverse communities.

Just three per cent of firefighters in the capital were from black and minority ethnic (BAME) communities when Micky joined compared with 14% today. Micky was awarded an MBE in the 2017 Queen’s Birthday Honours List for services to the fire brigade and to the black and ethnic minority community in London.

He said, “I joined at 26 years old and my only regret is that I didn’t join sooner. That’s not to say that there haven’t been difficult days because there definitely has. I joined as a firefighter and quickly labelled a black firefighter and it was a challenging time. I was part of a small group of BAME firefighters who helped forge a path for others to think of firefighting as a career for them.

“It has taken a lot of commitment and sacrifice. I hope the things I have fought for were worth fighting for. I’ve done it my way as the song goes, but now it is time for others to step up and champion equality. We’ve come a long way but the struggle is not over, we need more diversity in the fire services.”

Fifty five year old Micky recently met up with FBU’s black & ethnic minority members (B&EMM) for the final time. “It was a great seeing past and present members and humbling to hear their stories of how I’ve helped their careers. I’ve met lifelong friends in the fire service and I’m pleased that I leave in good health and looking forward to the next adventure.”

“Receiving my MBE was a great occasion and a very special moment especially for my mother, wife and children. One of my fondest memories of the day was my daughter Grace who became quite emotional and when we asked her why said ‘that she would have been prouder of me sooner’ had she realised my accomplishments. I hope that my award says to people from black and minority ethnic backgrounds that they can have long and fulfilling careers in the fire service.”

He also helped draft Safer Together, the Brigade’s 10-year inclusion strategy, which aims at making the capital's fire service the most diverse and inclusive in the country and as well as challenging the Brigade to reach our to BAME communities, Mickey also supported colleagues as a rep for the Fire Brigades Union (FBU).

London fire commissioner Dany Cotton said, “Micky has been a fantastic servant not only to London but to the whole UK fire service. He has been hugely influential at challenging the culture of the fire service and making it a better place for all to work. Micky has encouraged people to think about firefighting as a career and through his role in the FBU he has helped scores of people through difficult times. Micky’s work in developing officers and support of senior officers has been invaluable. It has been a pleasure to have worked with Micky since the early 90s and it is a privilege to call him a close personal friend. I wish him a very happy and long retirement.”

Fifty five year old Micky recently met up with FBU’s black & ethnic minority members (B&EMM) for the final time. “It was a great seeing past and present members and humbling to hear their stories of how I’ve helped their careers. I’ve met lifelong friends in the fire service and I’m pleased that I leave in good health and looking forward to the next adventure.”