HUGE NUMBERS of electrical fires are tearing through the homes of older people every day in the community, new research has revealed – and those who live alone are at greater risk. 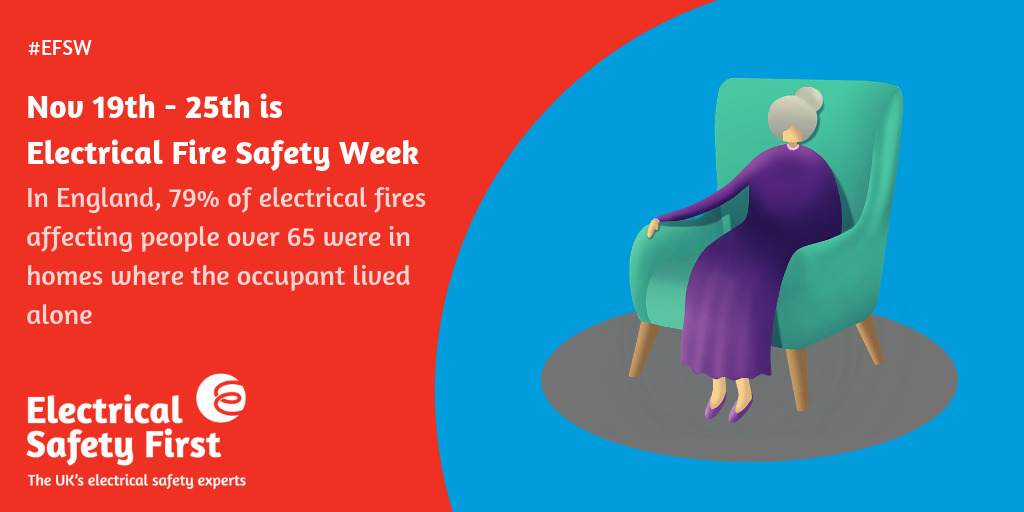 Analysis on fires in Great Britain by Electrical Safety First has unearthed that a shocking 12 accidental electrical fires occur every single day in the homes of older people living alone[1].

The consumer protection Charity, launching its campaign to protect older people as part of Electrical Fire Safety Week, discovered that last year a shocking 4,426 electrical fires occurred in the homes of those over a pensionable age who lived by themselves. This figure accounted for 22% of all accidental electrical fires that took place last year[2], which is severely disproportionate to the 7% of the overall population made up by those over 65s who live alone[3].

The Charity also surveyed Brits around the country over the age of 65, investigating how vulnerable those living alone feel to an electrical fire. Results showed that 1 in 4 felt they would be less at risk of experiencing an electrical fire if they were living with someone else[4].

The dangers these fires pose are shockingly prevalent, with older people living alone in Scotland accounting for 30% of all accidental electrical fires that occurred there last year[5], the equivalent of three every single day.

Isolation has also been found to be a heart-breaking issue for many older people living alone. On average the Charity discovered many of these respondents go, 3 months without seeing a family member, friend or neighbour who they may rely on to check their electrics[8].

With nearly half of respondents surveyed who live alone admitting they do not know the warning signs something could be seriously wrong with their electrics[9] the Charity is urging Brits to check in on their older relatives, friends and neighbours to perform some basic spot checks that could save a life.

Local North Cornwall hero, Dan Climo, knows first-hand the need to check in on older people in the community who may be living alone as he risked his own life to save his 87-year-old neighbour Brian during a dangerous electrical fire that consumed his house:

“I was in my turkey field at the time when I smelt burning coming from Brian’s bungalow, and looked over to see thick black smoke billowing up from his bedroom window. I knew I had to act quickly as I was sure he was inside.  I desperately rushed over to the burning building, jumped over his wall and ran inside. I discovered Brian lying unconscious half way out of his bedroom, he had clearly tried to escape but was overcome by the amount of smoke in his room. His hands were badly burnt too.

I pulled him out to safety and was so relieved to see that, although he had inhaled a lot of smoke and passed out, he was ok in the end. If I hadn’t have got to him as quickly as I did I’m not sure Brian would have lasted much longer. Things could have turned out very differently.

I was really shocked by the whole thing, you don’t expect something like this to happen on your doorstep and I’m just glad that Brian was ok. It was an electric blanket that caused the fire and there wasn’t a fire alarm in the building so it was just lucky that I was around at the time. It serves as a real reminder to check up on older people who live alone, check that their appliances aren’t dangerous or looking a little worse for wear and that they have an alarm fitted which could save their life.”

Director of communications at Electrical Safety First Emma Drackford commented, “We are urging Brits to check in on their older neighbour who maybe living alone in the community. With our findings revealing the shocking number of electrical fires affecting this demographic we can all do our part to tackle this issue. Checking in on your older neighbour, friend or relative won’t only go a long way in loneliness, but could save a life.

As part of this year’s Electrical Safety Week, Electrical Safety First is suggesting that anyone who knows an older person living alone checks up on them and, as well as having a cup of tea and a chat, has a look around their home to ensure there isn’t anything amiss with their appliances that could cause them harm. You may discover something that prevents a serious incident from occurring and with your help, we can change things for the better.”