THE NATIONAL Fire Chiefs Council (NFCC) has again called for all schools to be fitted with sprinkler systems following the devastating loss of two schools in Derbyshire. The buildings serving St Mary’s Primary School in Darley Abbey and at the Ravensdale Infant School in Mickleover did not have sprinklers installed. Had sprinklers been in place, it’s likely that the devastating damage suffered in both locations could have been reduced quite substantially. 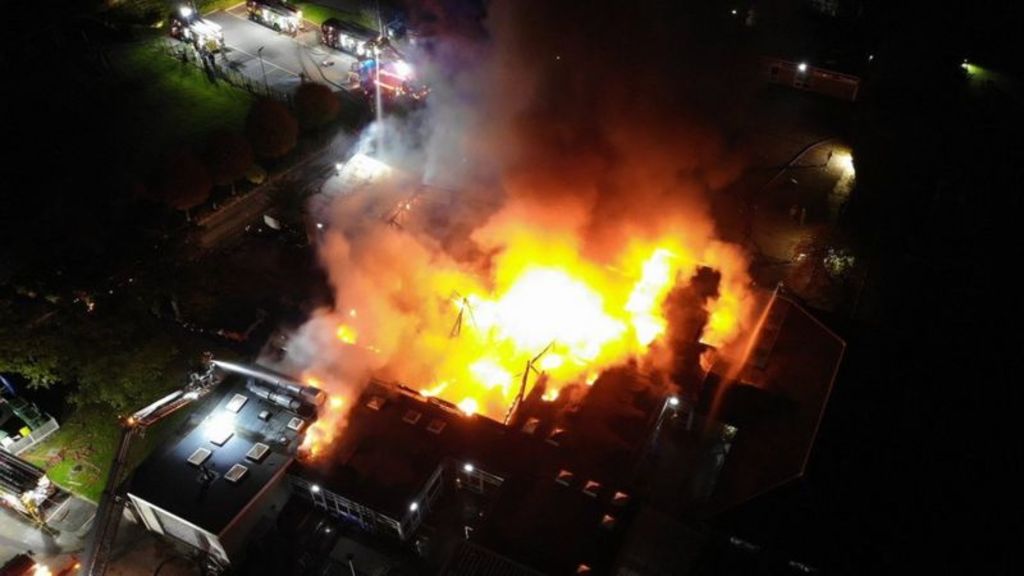 At 5.24 am on Saturday 3 October, firefighters were called to attend a fire at St Mary’s Primary School in Derbyshire’s Darley Abbey suburb which is around one-and-a-half miles from the city centre. Fire engines from Nottingham Road, Ascot Drive, Kingsway and Duffield plus two engines from Alfreton attended the scene. Despite the best efforts of the fire crews in attendance, the Catholic school was totally destroyed. A subsequent fire investigation into the blaze has concluded that the most probable cause was a deliberate ignition by the introduction of a naked flame.

Then, at 1.38 am on Monday 5 October, firefighters were called to attend the Ravensdale Infant School on Devonshire Drive in Mickleover. 12 fire engines and two aerial ladder platforms from across Derbyshire were in attendance at the height of the blaze. Fire crews worked swiftly and diligently to control the blaze, but sadly large parts of the building suffered extensive damage. Again, an investigation into the cause of the blaze has concluded that the fire was deliberate in ignition.

Detectives from Derbyshire Police investigating the incidents at present are “keeping an open mind” as to whether the two arson attacks are linked in some way.

The NFCC has been calling for sprinklers to be installed in schools for a number of years now. Every year there are around 1,500 fires in schools across the UK, which disrupts the education of approximately 90,000 students. The closure of a school also exerts a substantial social and economic impact on local communities.

According to figures released by the Association of British Insurers, the most expensive school fires cost somewhere in the region of £2.8 million to address. Over a four-year period, an average of 24 large loss school fires have occurred every year totalling £67.2 million to remediate.

NFCC chair Roy Wilsher has urged the Government to ensure legislation in England is the same as it is in Scotland and Wales, where it’s mandatory for sprinkler systems to be fitted in all new and refurbished school. Wilsher commented: “England is lagging behind Scotland and Wales when it comes to introducing legislation to fit sprinklers in schools. The NFCC believes that all new schools – and those undergoing refurbishment – should have automatic fire suppression systems fitted.”

In last year’s response to the Technical Review of Building Bulletin 100: Design for Fire Safety in Schools’, the NFCC duly highlighted the fact that the percentage figure of new build schools being fitted with sprinklers may have fallen from 70% to as low as 15%.

Wilsher continued: “We have a responsibility to ensure buildings are safer and sprinklers in schools is clearly a move in the right direction. Children across the UK have had their education severely disrupted this year due to the pandemic. A fire in a school will only make this worse, placing additional pressures on the education service and parents.”

Further, Wilsher (who was a guest on Episode 9 of the Fire Safety Matters Podcast) also pointed out that schools are important community assets which need to be protected. He has emphasised the importance of ensuring fire safety remains a key priority during the pandemic and to make it part of COVID-19 secure planning, along with revisited escape routes and fire drills.

Gavin Tomlinson, Chief Fire Officer of Derbyshire Fire and Rescue Service and also the NFCC’s lead on fire sprinklers, observed: “It’s devastating to see the impact of the two fires in this region. Such fires are resource intensive and to see the damage which could have been reduced substantially by sprinklers having been fitted is heartbreaking.”

In addition, Tomlinson stated: “I’m angered to hear that both fires were started deliberately. Unnecessary distress has been imposed on the children attending those schools, their parents and the teaching staff who work tirelessly to provide our children with the education to which they are entitled. I’m equally angered that these fires happened when there is a simple fire safety solution that would prevent or reduce such devastation which causes huge emotional and economic loss.”

Alongside the NFCC, Tomlinson will continue to lobby Government in calling for a change to fire safety legislation for schools in a bid to have the fitting of sprinklers in all new and refurbished schools mandated, thereby bringing England into line with Scotland and Wales.

“Sprinklers are one of a range of fire safety measures that would not only protect our schools from fire and prevent injuries,” concluded Tomlinson, “but would also protect against costly rebuilds and, of course, against the stress and anxiety caused to the children who need their education Frankly, I’m not sure what more evidence is needed to bring legislation in England firmly into line with Scotland and Wales. We have a responsibility to build safer schools.”