AN INNOVATIVE online tool designed to help people identify fire hazards at home has been launched by the London Fire Brigade (LFB). The Home Fire Safety Checker (HFSC) allows individuals to receive tailored advice based on their building and guides Londoners around the rooms of their home to help them identify any potential risks and hazards. 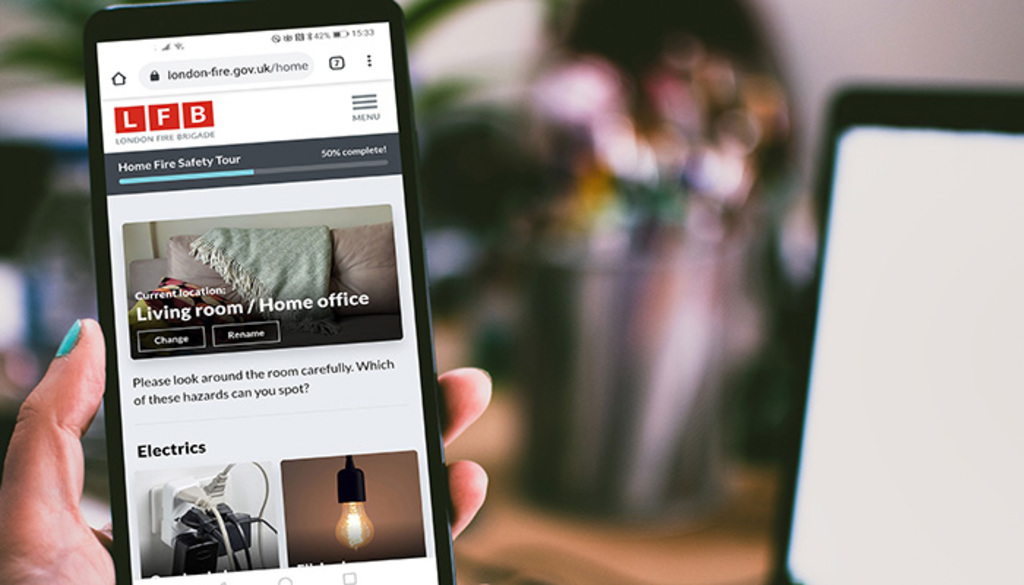 The tool is the latest innovation from the LFB as it tries to make people living in one of the world’s most complex and diverse cities that much safer.

In 2018, the LFB was the first fire service in the UK to begin using fire escape hoods, which were deployed successfully at the recent New Providence Wharf fire. New ways of fighting fires in high-rise buildings have also been introduced.

The launch of the HFSC comes just days after concerning images of the blaze at New Providence Wharf were circulated across social media. Firefighters hope that conducting an online fire safety check could help those residents who are worried about safety issues in their flats.

In addition, the LFB also wants to reassure residents that procedures for how high-rise fires are responded to actually made a significant difference in terms of how the recent fire in Poplar was resolved. These include the increased number of resources and firefighters sent to all high-rise fires as standard, new procedures on how information is relayed from Control Room officers to the incident ground and back (including vital details about fire survival guidance calls) and the introduction of fire escape hoods which were used to rescue 22 people from the New Providence Wharf fire.

The HFSC is another measure introduced by the LFB to encourage people to do all they can to identify fire hazards at home and also outline what they need to do in the event of an emergency scenario.

After reports emerged of residents purchasing rope ladders to carry out their own escapes and many instances of residents ignoring their buildings’ evacuation plans following the New Providence Wharf fire, the LFB is warning people that they could be putting themselves at more risk by taking drastic measures and encourages them to use the HFSC in order to familiarise themselves with their home.

The LFB wants to focus as many of its in-person Home Fire Safety Visits on vulnerable people. The online checker is an easy-to-use tool for everybody. It will signpost people to book an in-person visit if any significant risks are raised.

Richard Mills, Deputy Commissioner of the LFB, said: “We completely understand that people have seen concerning images of late. We want all Londoners to have faith in us. Across the last year in the capital, on average a fire engine has been at the scene of a fire within five minutes.”

Mills continued: “Anyone living in a building with potentially flammable cladding attached to it should make sure they familiarise themselves with what action they must take in the event of a fire. In the majority of high-rise and purpose-built blocks of flats in London, as long as those structures are properly maintained it’s usually safer for people to remain in their flat unless directly affected by smoke or fire.”

He added: “To further reassure people, we’re pleased to launch the Home Fire Safety Checker which has been developed by ourselves using a collaborative approach involving both internal departments and external stakeholders, among them those people who have received in-person Home Fire Safety Visits. This checker isn’t just about clicking on boxes. Rather, we hope it will really make people think about the potential fire hazards in each room of their home and take action to make them and their families as safe as they can be.”

The aforementioned Home Fire Safety Visits were introduced in a bid to prevent accidental fire deaths and injuries in the home as well as to reduce the number of fires occurring. Since they were launched in London back in April 2005, more than a million visits have been carried out and LFB staff have given advice to upwards of 2.5 million people.

Further, the LFB has installed more than 938,000 smoke alarms and circa 28,000 pieces of specialist equipment such as alarms for the deaf or hard of hearing.

Fire escape hoods provide members of the public with up to 15 minutes protection from four of the main fire gases and can be worn by conscious or unconscious people. They don’t deliver oxygen, but they do temporarily filter toxic smoke to make breathing easier.