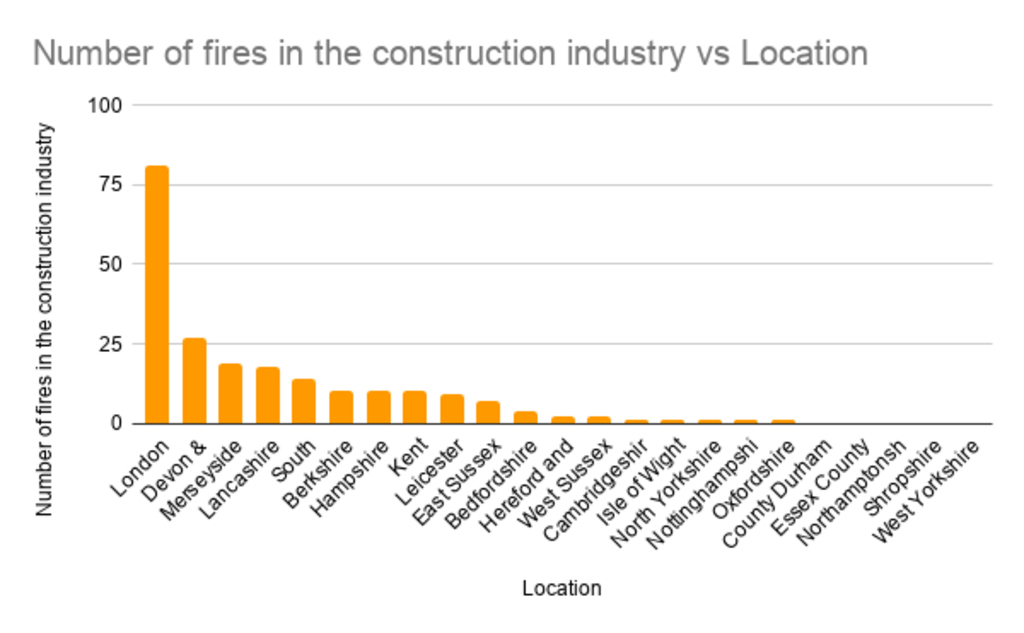 The Freedom of Information request findings have shown that the Top 5 locations across England with the highest number of fires at construction sites during 2018-2019 were London (with 81 fire episodes in all), Devon and Somerset (27), Dorset and Wiltshire (24), Merseyside (19) and Lancashire (18).

CE Safety also found out that the main causes of these fires was welding/cutting equipment, combustible articles being too close to the heat source or incidents involving the use of a blow torch or some other form of industrial equipment. In total, there were four injuries reported across England.

The team at Health and Safety-focused training specialist CE Safety actually contacted 40 Fire and Rescue Services across England. Of those, ten do not record information specific to the construction industry, while five have yet to respond.

According to figures received from the Fire and Rescue Service in South Wales, there were three fires in buildings under construction caused by hot work. Two incidents were due to soldering and one as a result of welding. There were no injuries reported.

The North Wales Fire and Rescue Service confirmed that there was one fire incident in a building under construction due to hot work. There were no casualties or fatalities recorded. The fire was caused by industrial equipment (ie welding/cutting equipment).

The causes were also divided into careless handling (due to careless disposal), combustible articles being too close to a heat source (or fire), a natural occurrence and the negligent use of equipment or an appliance (ie a heat source). No injuries were reported.

All of that realises a total of 17 fires caused by hot work in Wales.

Further, the Scottish Fire and Rescue Service confirmed that there were 180 fires in the construction industry in 2018-2019, an overwhelming 143 (79%) of which were the result of hot work. 51 fires during this period were caused by welding or cutting equipment, 22 by manufacturing equipment and 23 by kilns or other services. These fires resulted in a total of 21 casualties.

The Northern Ireland Fire and Rescue Service confirmed that no information is held in relation to fires in buildings under construction.

A hot work permit is a legal requirement for most forms of hot work and is an expectation of any enforcing authority such as the Health and Safety Executive and any local Fire and Rescue Service. A Hot Work Passport is recommended for anyone involved with hot works. This includes manual workers, supervisors and site managers, as well as anyone responsible for overall Health and Safety on a given site.

Training in this area is not a legal requirement. However, the permit itself is a legal document. It clearly states the responsibilities (and, therefore, liability) of individuals under the Health and Safety at Work Act 1974, the Regulatory Reform (Fire Safety) Order 2005 and the Construction, Design and Management Regulations 2015.