South West London’s Kingston University stands tall in the Higher Education sector for the way in which it has positively embraced security to achieve an open and safe campus environment. As Guy Ferguson explains, the institution has done so thanks to salient guidance and support from the Metropolitan Police Service and Police Crime Prevention Initiatives 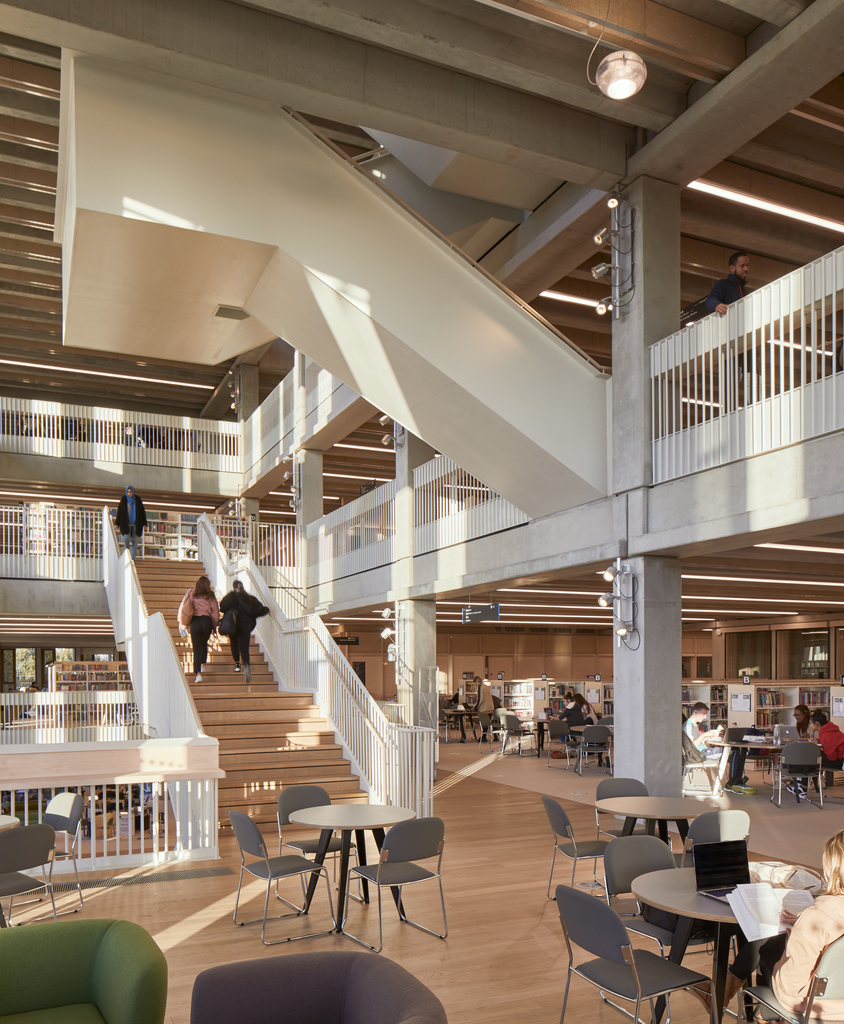 DESIGNING A university building that keeps students and staff safe while also encouraging members of the public to share its library, cafes and meeting rooms is a significant challenge, but this is precisely what has been achieved at Kingston University’s Town House – a campus gateway building which shares its facilities with resident students and the local community.

Through its revolving front door is a spacious foyer, a covered auditorium and an 80-seat theatre. On the first floor reside three dance studios. The library extends from the second to the fourth floor. In addition, there are cafes on the ground and fifth floors and a number of group rooms on the second and third floors. With public availability to all, security was always going to be critical.

Members of the Metropolitan Police Service’s specialist team of Designing Out Crime Officers (DOCOs) were involved with the Town House development at the concept and design stages from January 2015. This was eight months before planning permission was granted and two years before building work commenced. Advanced planning was vital, especially so as electrical services were cast into the concrete skeleton of the building prior to arrival on site.

The DOCOs were working to crime prevention standards set by Police Crime Prevention Initiatives’ (PCPI) flagship Secured by Design scheme, which sets police standards for a building’s physical security, encompassing elements such as doors, windows and locks. This involves security products not only being rigorously tested, but also fully certificated by an independent third party certification body accredited by the United Kingdom Accreditation Service to ensure that products continue to maintain their security standards.

The DOCOs were also incorporating designing out crime principles into the surrounding environment. This included the desire to maximise natural surveillance, limit excessive through movement and create defensible space in a bid to deter opportunist criminals and reduce criminality per se.

Across the following four years, the DOCOs worked on both the physical security and layout and landscaping with a team of security consultants, the university’s security and faculty teams, Grafton Architects and contractor Willmott Dixon. All parties committed to delivering on Kingston University’s ethos of being part of the community as well as meeting the needs of students. The Town House opened its doors in January last year.

All of the security and access requirements of every door on each floor, the siting of more than 100 CCTV cameras, cycle parking, boundary treatments and many other security aspects were all considered to allow for use during the day and into the evening. Clear sightlines were important, too, and particularly around the circular front welcome desk area and on the library floors where shelving units have been restricted to four tiers to maximise surveillance.

External safety and security considerations include access to stairwells and swipe card cycle storage. The landscaping at the front of the building has created clear lines of vision, cycle routes and sufficient pavement width to allow for large numbers of students to arrive and leave at the same time.

All security measures are continually linked to a 24/7 Security Control Room. The majority of the security products in the Town House have achieved Police Preferred Specification standards and, in fact, many were supplied by Secured by Design member companies.

Pat Simcox, a DOCO with the Metropolitan Police Service, explained that security ‘walk-throughs’ were initiated to evaluate in detail the access requirements of every door and the position of each surveillance camera. “The security was under review constantly and there was a readiness to address issues that were not obvious from the site plans,” explained Simcox.

Inspector Matt Turner of the partnership and prevention team at the Metropolitan Police Service added: “Early engagement and good partnership working can achieve fantastic results. This ensures that security considerations are incorporated throughout the development in a subtle manner and not seen as an awkward afterthought. The Town House is a great facility for the students and local community, while the finished design will help reduce opportunities for crime and the demand placed on policing.”

Gary Young, technical co-ordinator in the university’s Estates Department with direct responsibility for the Town House, had visited a number of universities to seek out Best Practice advice and duly found a wide spectrum of provision ranging from relaxed to imposing security regimes. In some cases, the impression was that security had been compromised by building architecture.

“We looked at the whole process in a different way,” asserted Young. “All of our buildings comprise an open campus. That’s exactly what we want. We didn’t want to put up a building that went against our community objectives. Assessing the needs of students, staff and the public in tandem was complicated, but we managed to find a resolution.”

Ian Appleford, head of health, safety and security at Kingston University, stated: “We’re a community-facing organisation and want the building to be seen and appreciated. We have a Duty of Care to our staff, students and all building users. We’ve ensured that reasonable measures and restrictions are in place that can be applied as and when we need them. This assists us in being able to use the building for a range of purposes.”

Necessarily, the Town House was forced to close its doors within three months of opening due to the Government’s COVID-19 restrictions. It then reopened last September, but on a reduced capacity basis.

The ability to operate in the local community bordering the campus, which had been outside the realm of the university’s security services, has been made possible because of the Community Safety Accreditation Scheme (CSAS).

A voluntary scheme enshrined in Section 40 of the Police Reform Act 2002, the CSAS enables private security companies in England and Wales to have their staff accredited with certain police powers bestowed by their local police force.

The role of assessing private sector companies seeking approval to run a CSAS is carried out on behalf of the National Police Chiefs Council by PCPI, which conducts thorough checks to establish whether or not companies are deemed ‘fit and proper’ to exercise CSAS powers. PCPI then makes recommendations to chief constables in the area the scheme will operate. Ultimately, it’s the chief constables who’ll decide whether to accredit employed individuals already working in roles that contribute towards maintaining and improving community safety with limited, but targeted powers.

Kingston University’s CSAS scheme was launched at the beginning of the academic year in September 2017 after members of the team had undergone comprehensive police vetting and extensive training, including personal safety and conflict management instruction and the practical application of limited, but targeted powers to reduce student-related anti-social behaviour in designated areas outside of the campus boundary.

Wearing distinctive uniforms and identity badges, accredited officers conduct patrols while kitted out with stab vests, body-worn video cameras, portable First Aid kits and even water bottles just in case they happen to be confronted by the abhorrent spectre of acid attacks.

Their accredited CSAS powers include requesting the name and address of any individual acting in an anti-social manner and in the wake of offences that cause injury, alarm and distress, requiring those persons under 18 years of age to surrender any alcohol they might be carrying and dealing with begging

The Kingston University Service Company addresses local community concerns which include escorting or monitoring large groups of students leaving the university’s bars for accommodation outside of the campus boundary, as well as those returning late at night from the town centre to access their on-campus Halls of Residence.

In addition, the team deals with local house parties overflowing into streets and any complaints about anti-social behaviour from members of the public.  In the first year of operation, 229 ‘events’ were logged and 76 ‘interventions’ made by the CSAS team members, who also worked towards achieving a significant and impressive reduction in unwanted noise and graffiti on campus.

The Kingston University Service Company has been of great assistance to the Metropolitan Police Service in many other respects, such as dealing with drunk and disorderly homeless people, dealing with ‘suspicious’ vehicles parked near to the Halls of Residence and intervening to stop a group of unknown youths behaving in an anti-social manner on bicycles. Youths on motorcycles riding recklessly in an alleyway have also been reported.

The Metropolitan Police Service has informed the Kingston University Service Company that reports of anti-social behaviour in the streets surrounding the Halls of Residence have been few and far between, if any. Reports of incidents to the police from one particular street outside the campus boundary had actually fallen from more than 50 in a 24-month period to zero following on from the launch of the CSAS.

Nigel Bell, security manager for the Kingston University Service Company, explained: “Kingston University wants to create a presence in the Borough that reflects the importance of our civic and community ambitions. We want an open and welcoming approach to collaboration between the university, local residents, businesses and the police service. Security plays a major part in what we’re seeking to achieve here.”

He continued: “Creating a safe and secure environment for students, staff, visitors and contractors has always been well-entrenched as part of the proactive nature of our security team. What the CSAS has done is enable us to extend our remit beyond the campus to tackle any anti-social behaviour in surrounding streets. The CSAS continues to receive positive comments from students, staff, residents and the police which is the perfect outcome.”

Further, Bell observed: “In reality, the CSAS means that we can help students to stay safe over a wider area and also assist the Metropolitan Police Service by taking the pressure away from its own officers, reporting incidents to them only as and when we need to do so. That assists the police service in being able to make the most of its hard-pressed resources.”

Strong support for the university’s security team has emanated from the Metropolitan Police Service itself. Superintendent Roger Arditti of the South West Borough Command Unit, which includes Kingston within its remit, outlined: “The Kingston University Service Company and its CSAS personnel are continuing to work closely with the Metropolitan Police Service to exert a positive impact on the local community and the quality of life around the university. We’ve seen reductions in night-time anti-social behaviour calls to the police of up to 95%. This is a prime example of Best Practice. The fervent hope is that this particular CSAS will become a model for other institutions nationwide to follow.”

Ken Meanwell, who leads on the CSAS for PCPI, concluded: “The Kingston University Service Company is an excellent example of how the CSAS process has provided a raft of benefits to students, staff and local residents. The number of complaints from those local residents has reduced significantly since the scheme was introduced.”