THE AIRPORT Fire Officers Association (AFOA) recently held its Annual Conference for 2022 at the Hilton Birmingham Metropole Hotel. Sponsored by Simulation Alpine Metal Tech and concluding with a gala dinner, the day explored emerging issues in the field of airport rescue and firefighting. 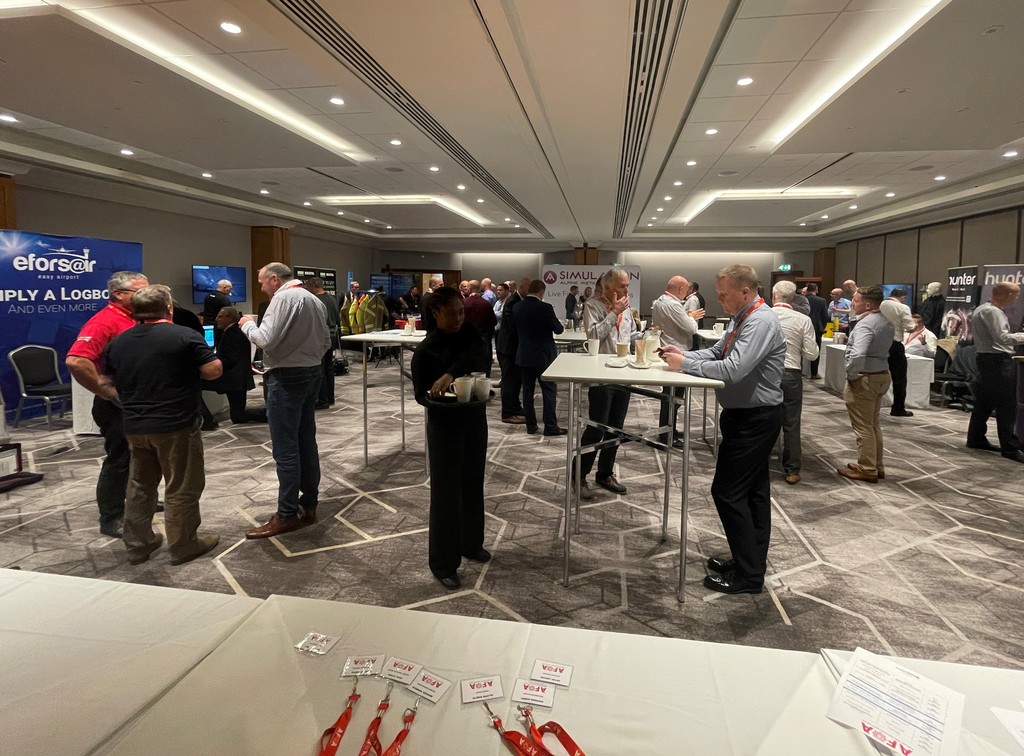 Simon Petts, chair of the AFOA, welcomed delegates to conference and duly delivered a summary of activities undertaken by the Association in the last 12 months. Petts then went on to introduce the day’s programme of eight speakers, each of whom was selected in a bid for conference to cover a diversity of emerging issues focused on the aviation firefighting sector.

Petts also confirmed to delegates that he would be standing down as chair. Barry Alderslade has agreed to take over this role for a period of one year.

Clark asserted that communication is key to delivering the required cultural change. It’s important to lead everyone on the journey towards the new organisation. Moving and promoting people across old regions was not always popular, but did help in developing cultural change. New recruits also played a key role in fashioning the new culture and, steadily, the value of the single Scottish Fire and Rescue Service began to be demonstrated.

The very different task at Capita has been to modernise service delivery across 27 UK and nine international Ministry of Defence locations under the Defence Fire and Rescue Project. Carried out in times heavily affected by the COVID pandemic, this project had many parallels with the Scottish Fire and Rescue Service formation, as well as several differences.

The military environment is a very different one, of course. Firefighters went from military to civilian roles under the project. Face-to-face communications were restricted by COVID. Nevertheless, a full communications plan was deployed to keep people fully engaged, underpinned by weekly ‘huddles’ and monthly ‘cascades’.

During the process, 138 new vehicles were deployed and all PPE was replaced. 600 individuals were trained, with more than 50 new recruits and 70 promotions, while an airport rescue and firefighting (ARFF) training capability was established at the training college. A further key factor for success was the better use of data to inform management decisions.

Looking at both projects, Clark concluded that the approach has to be customised to the organisation and be able to reset in light of emerging events.

Gray continued by summarising recent developments in post-Brexit RFFS policy workstreams at the CAA. On fuels, the CAA is developing policy in the context of the general drive towards decarbonisation in order to cover conventional fuels, sustainable fuels, electricity and hybrid.

As a collaborative process, the CAA is reintroducing a common qualifications framework for training. Chapters 8 and 9 of CAP 168 are also being refreshed. Further, the CAA is developing policy for spaceports like Newquay, helidecks at hospitals and elsewhere and vertiports for emerging electric VTOL aircraft.

Finally, Gray also clarified the position with regard to the recent ICAO State letter regarding rescue and firefighting services for general aviation operation. All UK airports are licenced or certificated for commercial air transport. Unlicensed UK aerodromes are not permitted to handle passengers in any case, so no changes are required in terms of current regulations.

In its key role of professionalising the Fire and Rescue Service, the NFCC is establishing the College of Fire, which is based on the model of the College of Policing. He also reminded delegates of the recent work published by the Fire Standards Board including a focus on dwelling fires, high bay warehousing and nuclear installations.

Lacey then moved on to his own specialist area of the NFCC – the Air Transportation Group workstream – which is currently undertaking a definition of risk-focused project for air transportation. The NFCC has signed a Memorandum of Understanding with the Air Accidents Investigation Branch and established a military liaison to cover rare civil and military incidents.

Lacey also made a point of publicly thanking AFOA for its efforts in supporting the Air Transportation Group workstream.

The NFCC is also operating a Working Group that’s targeting fire issues concerning lithium-ion batteries in addition to other other emerging challenges, such as spaceports.

During the pandemic-related downtime, the company took the opportunity to invest heavily in new product development and has been in the process of launching some 54 new products, including the V22 Osprey aircraft and a new mobile aircraft fire trainer that doesn’t require planning permission.

In addition, the company is currently working on a new hydrogenated vegetable oil simulator in a determined bid to simulate biodiesel fires.

In a fascinating hour-long presentation, Martin Lown of the FireWise UK Learning Academy took delegates through the fast-changing world of alternatively fuelled electric vehicles (EVs) and the different risks they present in the airport environment. EVs, charging infrastructure and other alternatively fuelled vehicles fire training should be incorporated into emergency planning, exercises and all airport firefighter training.

Airport car parks typically house a mix of EV and internal combustion engine (ICE) car types with the potential for disruptive smoke plumes in the event of fire. In multi-storey car parks, there are the added risks of poisonous gases and higher temperatures realised by containment.

Hydrogen-fuelled cars present unique risks and fire characteristics, but fires involving them remain rare due to the lack of fuelling infrastructure. Fuel cell EVs with hydrogen range extenders can present hydrogen and battery risks in the same vehicles. Airports are already served by hydrogen-powered buses and trains, while CNG and LNG buses are becoming more common. Cargo centres may feature LNG, CNG, electric and diesel-powered vehicles, any of which may also have lithium-ion battery cargoes.

While other battery chemistries are currently in development, current EVs mostly use lithium-ion batteries. All types of vehicles are now fitted with them including e-bikes, hover boards, scooters, cars, vans and buses, as well as ground service vehicles. For their part, e-taxis can present an elevated fire risk due to battery abuse because users seek multiple fast charges each day.

Distinguishing the power source of vehicles can be a challenge. The green tab on EV number plates isn’t mandatory. Design features such as lack of visible exhaust are not always conclusive, and even vintage vehicles are now being retrofitted with battery electric drive.

EVs are less likely to catch fire than ICE vehicles and are generally far safer, but any fires that do occur are longer duration and higher impact. Factors include quality of battery, abuse, overcharging, overheating, vehicle impact damage, water ingress and submersion.

Fire behaviour is different and starts with off-gassing before transitioning to flame and can then move to a projectile stage. The ‘smoke’ seen from cells is actually toxic vapour. State of charge is a factor, with a higher state of charge producing a more vigorous fire.

Firefighters need to be aware of risks, while also being trained and equipped. Think about where charge points are located at air terminals and identifying the associated risks. Lots of high voltage components in EVs present risk and are not always that easy to identify. Fire blankets are useful for EV cars and bus-sized versions are becoming available.

The key messages are to deal with fire and then deal with the battery pack, applying water. Reignition can occur in EV fires, with the longest recorded case taking place after 68 days.

Working with a neurodiverse workforce

Miriam Heppell has Ehlers-Danlos syndrome which is often associated with neurodiversity, as well as joint hypermobility and pain. This hasn’t held her back from a distinguished career in HR, most recently in the role of assistant director of learning and development at the London Fire Brigade where Heppell is playing a key role in supporting neurodiverse employees within the Fire and Rescue Service.

Neurodiverse individuals are not necessarily disabled and can have ‘super powers’. They may have one or several of the following conditions: autism, ADHD, dyslexia, dyspraxia, dyscalculia and/or Tourette’s syndrome. These are often undiagnosed and, in women, tend to be under diagnosed. One reason for this is that a lot of the research into neurodiversity is based on males. Also, women with autism tend to be creative and voracious readers, whereas men with autism are more likely to be computer programmers.

By supporting deficit areas in the neurodiverse, employers can benefit from their ‘super powers’ which include strategic thinking (ie thinking differently), empathy, innovation, creativity, observation skills (seeing things that others miss) and being keen problem solvers.

Heppell stressed the importance of understanding and accommodation. Employers should avoid aggressive performance management in deficit areas, instead focusing on understanding, support, recognition, reasonable adjustments, sensitivity, awareness and flexibility. In return, they will be rewarded with passion, loyalty, delivery, honesty, depth of thinking, attention to detail and much more.

The aim should be for supportive handling of neurodiversity to become normal in the workplace. Estimates of the proportion of the population who are neurodiverse range from 0.2% to 20%. The neurodiverse appear to be attracted to the Fire and Rescue Service. 30% of the London Fire Brigade’s personnel are classed as being neurodiverse.

Abby Hannah (biomedical scientist at Steadfast) was next to present. Hannah focused her attentions on the risks associated with ultrafine particles in aviation settings. Airport combustion gases create ultrafine particles, which are 36 times smaller than a grain of sand with jet fuel and diesel combustion creating particularly high levels at airports. These particles are linked to chronic disease and higher rates of cancer in firefighters.

Multiple mechanisms are thought to play a role including inhalation, absorption and ingestion. Areas of weakness in current PPE include hoods which leave an area of exposure and allow particulates to contact the skin. The greatest areas of absorption align with cancers: the front and back of the neck, the jaw and hands.

Among mitigation measures, Schiphol Airport is currently trialling the use of mist to reduce ultrafine particles. Hannah recommends the use of particulate-blocking PPE including FFP2 masks and blocking hoods.

David Row (air traffic controller at Cranfield Airport) updated delegates on the work being undertaken at Cranfield University around UAVs (aka drones) and airspace management as drone use continues to diversify and grow. Cranfield is using its Centrik audit system to prove the abilities of drones and develop policy and regulations for safe airspace management.

How do drones talk to air traffic control? Also, how do drones fit into routine airport procedures, such as runway inspection? Current regulations rely on ‘eyes and size’ and are based on aircraft with people in them, whereas UAVs are smaller and, of course, unmanned. The regulations are based on model aircraft and require closure of an area of airspace when going beyond current visual line of sight, which is not viable in the long-term as drone use grows.

Future applications for UAVs include firefighting incident management, infrastructure inspection, solar farms, noise research and beyond airports. Eventually, suggested Row, we will reach a world of Amazon UAV-delivered trainers, but it’s some way off yet.

In March 2023, AFOA is planning to return to its traditional two-day conference and exhibition format with CPD-accredited Working Groups embedded in conference. Dates and more details will be announced for members as soon as they have been confirmed.

*Further information is available online at https://www.afoa.org.uk/
MORE FROM THIS COMPANY