FIREFIGHTERS DECAMPED to Westminster to meet with MPs, securing the support of Shadow Fire Minister Karen Lee, Joe Steven and Graham Morris, who spent time discussing the planned cuts and pledged to campaign for fairer funding for the service. 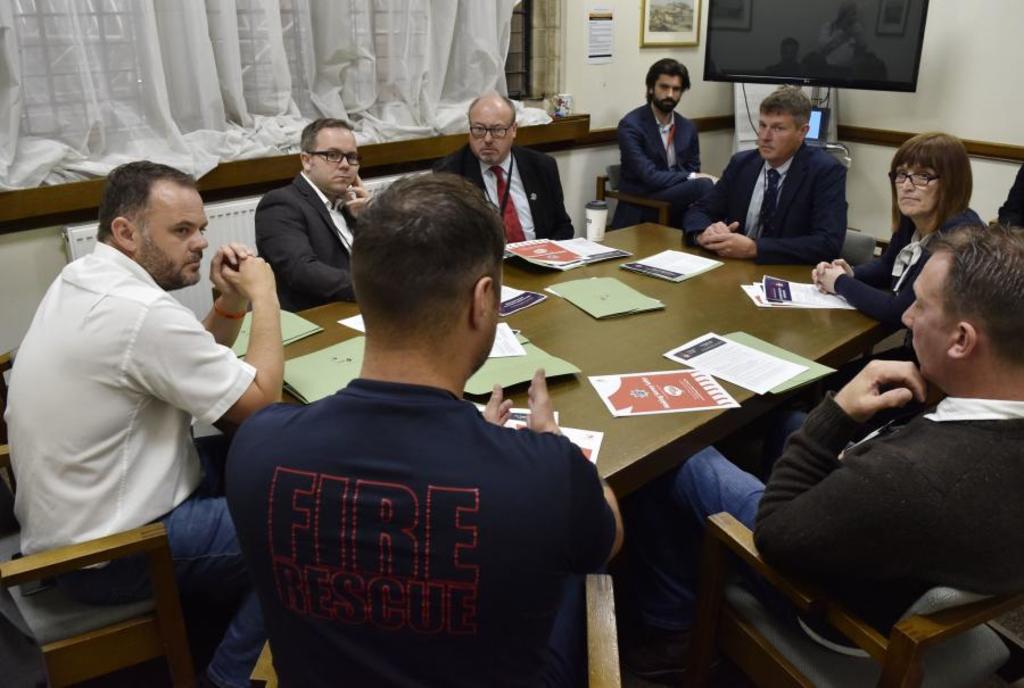 The lobby of Parliament follows the news that cuts to fire cover at night will disproportionately affect the area’s elderly and vulnerable residents.

Despite inviting all MPs for the areas which will be affected by the proposed cuts, including Michael Gove and Philip Hammond, no Surrey Conservative MPs attended the meeting. This is despite over 10,000 Surrey residents signing a petition calling on the council to scrap the planned cuts. Firefighters are deeply disappointed by the lack of support from Surrey MPs for their campaign to keep safe fire cover in the county at night.

FBU Surrey Brigade secretary Lee Belsten said, “It is greatly disappointing that Surrey MPs refused to meet with firefighters to discuss the impending cuts. They are choosing to ignore Surrey firefighters and over 10,000 residents voicing their concerns for the elderly and vulnerable residents in their constituencies.

“Surrey firefighters are already struggling to keep the public safe after years of cuts to the fire service. Our service needs investment and we’re grateful for MPs like Karen Lee pledging to campaign for fairer funding.”

Surrey Fire and Rescue Service has already experienced brutal cuts, with 131 firefighter positions slashed between 2010 and 2018 – a 17% reduction in the workforce. Proposals to cut a further 70 firefighters would lead to a total 22% reduction since 2010.

The cuts would also see drastic reductions to fire cover at night, resulting in a significant slowing of emergency response times. Last year, 75% of fire deaths occurred on the nightshift between 18:00 and 09:00. Egham, Painshill and Banstead fire stations closed at 18:00, while fire cover at Guildford, Woking, Camberley, and Spelthorne would be halved during the same period.

The latest revelations follow a December 2018 report from Her Majesty’s Inspectorate of Constabulary and Fire and Rescue Services (HMICFRS) voicing “serious concerns” about the service’s effectiveness and efficiency in keeping people safe and secure from fire and other risks.