A NEW White Paper examining the implications of the transition from physical to digital security documents has just been published by Reconnaissance International. ‘Physical to Digital: A Revolution in Document Security’ considers the implications behind the current digital revolution in the areas of financial transactions and ID document security. 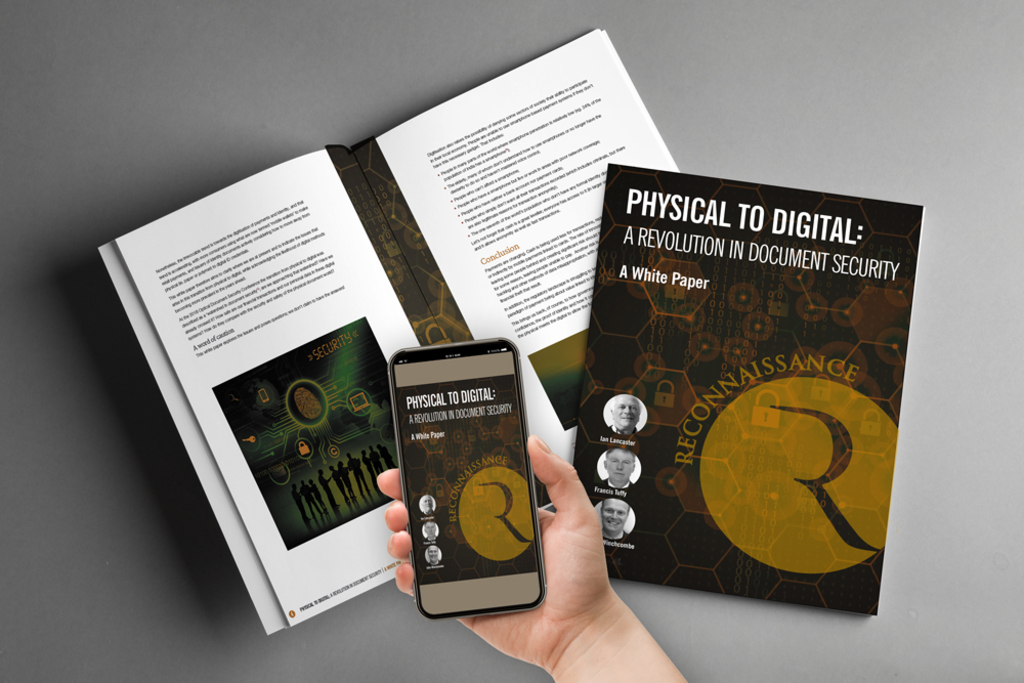 The publication contrasts more than 1,000 years' worth of experience in printing and examining security documents with the last three decades, which has seen a huge growth in the use of smart phones in what has previously been the domain of secured printed documents.

Protection and security are seen as the primary drivers in the physical document world, while digital growth is being propelled by a ‘Can we do it? And, if so, how?’-style attitude, rather than security. Examples of breaches, hacks and outages in the digital world are included in the White Paper. A comparison reveals that, in the EuroZone, the incidence of payment card fraud is over 300 times greater than the number of Euro banknotes that are counterfeited.

The White Paper also considers how far the transition in security documents from the physical to the digital has proceeded and what the future holds. It also questions the safety of the data that's held and used in the digital world (given that we're now witnessing data breaches that enable the theft of personal information about tens of millions of people).

While there's a recognition that society cannot turn the clock back, the White Paper nevertheless urges caution and the need to change the mindset of people working on digital finance and digital ID such that they put data and personal security at the heart of this new world.

The White Paper concludes that the use of digital technologies has some way to go before replacing cash (most people in most countries continue to rely on cash for retail transactions). Similarly, when it comes to ID documents, while digital technologies are undoubtedly attractive, for the time being they remain some way short of being ubiquitous.

It’s clear, states the White Paper, that physical banknotes and ID credentials remain the norm, with the inspection of these documents by people and machines remaining the essential step in detecting fraudulent documents.

Ian Lancaster, founder and former managing director of Reconnaissance International and lead author and Editor of the White Paper, firmly believes that this document is an important contribution to the digital document debate, clarifying the current position and the critical issues.

Lancaster stated: “A digital revolution is taking place. We're moving from a world in which people can examine and inspect a document to check its legitimacy to one in which we're required to trust that a device, such as our smart phone, is doing what we think it’s doing. Is the data it’s using accurate and secure and is the decision it leads us to make both correct and appropriate? Throughout all the issues and considerations this raises, we must ask the question: 'Does digital make us and our data safe and secure?'”

The White Paper sets out the issues for which Reconnaissance International is creating discussion platforms, including the Digital Document Security Conference, which takes place from 5-7 October in Vienna, as well as an extended special report due for publication later this year entitled ‘Secure Documents: The Transition from Physical to Digital’.

*Copies of ‘Physical to Digital: A Revolution in Document Security’ are available free to download at https://digitaldocumentsecurity.com/
MORE FROM THIS COMPANY