Minister meets and thanks wildfire firefighters

THE MINISTER for policing and the fire service, Nick Hurd, met firefighters from Lancashire and Greater Manchester Fire and Rescue Services (FRSs) who have been tackling wildfires in the region. 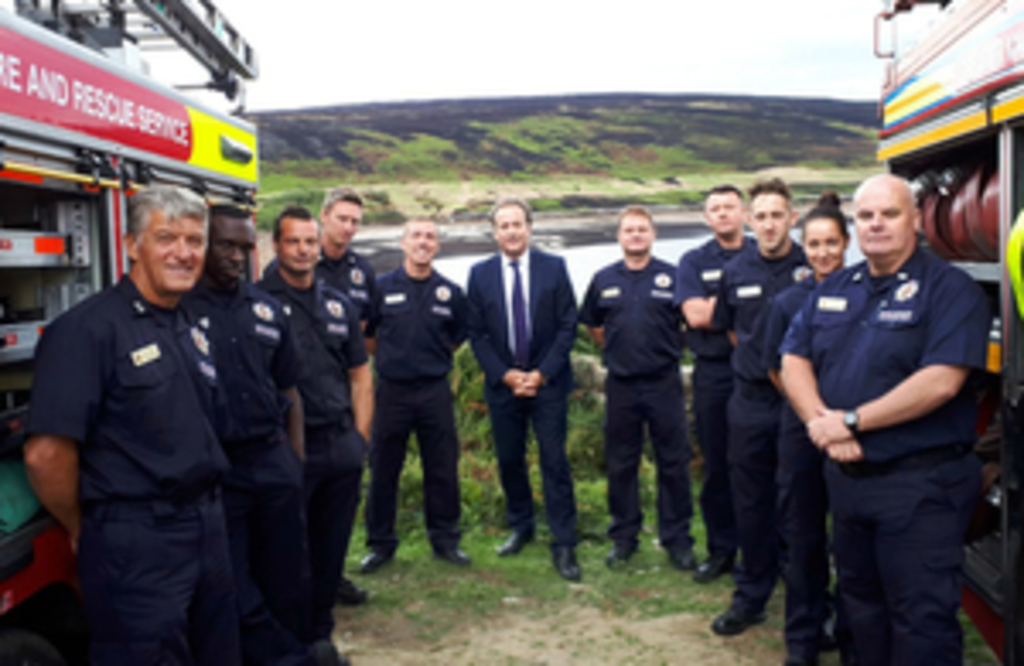 Minister for Policing and the Fire Service Nick Hurd said: “The tireless efforts of firefighters in Greater Manchester and Lancashire and their partners to contain wildfires over the last month have been astounding.

“The Saddleworth Moor and Winter Hill fires were some of the most severe in living memory, and I’m grateful to our firefighters for tackling these fires so effectively and ensuring no one was hurt.

“I was honoured to meet some of the men and women involved this week and thank them in person for their continued service to their local communities.

Dawn Docx, interim chief fire officer at Greater Manchester Fire and Rescue Service, said: “The moorland fires we’ve experienced this summer have been one of the busiest periods in Greater Manchester Fire and Rescue Service’s history. I’m pleased the fire minster has visited the scene of the Tameside fires and met with firefighters and officers to get a small flavour of the incredible work our crews put in and the challenges they faced.

“Over the course of nearly a month, hundreds of firefighters worked day and night in challenging circumstances to bring these fires under control. I’m fantastically proud of their efforts, as well as those of our officers and support staff, who all pulled together to deal with these major incident, doing whatever they could to protect our communities.

In Lancashire, the minister viewed equipment used to fight the blazes – including a drone, various off-road vehicles, and one of the High Volume Pumps (HVPs) used to provide essential water supplies to extinguish the fires and stop them spreading.

Chris Kenny, chief fire officer at Lancashire Fire and Rescue Service, said: “I was pleased to welcome the minister and for him to hear first-hand the challenges our firefighters faced in bringing the Winter Hill moorland fire under control.

“Crews worked long hours in extremely hot and difficult conditions, supported by partners from the public and voluntary sectors. Undeterred, their efforts contained the fire, protected the vital TV transmitter at the top of the hill and threats to life and property were avoided.

“Despite the devastation this moorland fire has caused, the way in which all those involved pulled together is something of which Lancashire can be rightfully proud.

The Home Office funds specialist capabilities like the HVPs – including the training required to use them and their maintenance – and the National Resilience Assurance team of specialist firefighting experts based in Merseyside FRS.

The government also supported work to contain the fires with military assistance at the Saddleworth Moor site. This involved the mobilisation of 100 soldiers.

Along with other government ministers, Nick Hurd received regular updates from the organisations and spoke to local chiefs while the operation was ongoing. Fire chiefs advised the minister not to visit the moors until the situation was under control.