THE WIDER impact of a fire which recently destroyed the only supermarket in a Norfolk town has “far-reaching ramifications” for the community, especially so at such a critical time when businesses like the Budgens store in Holt are an important lifeline for people. 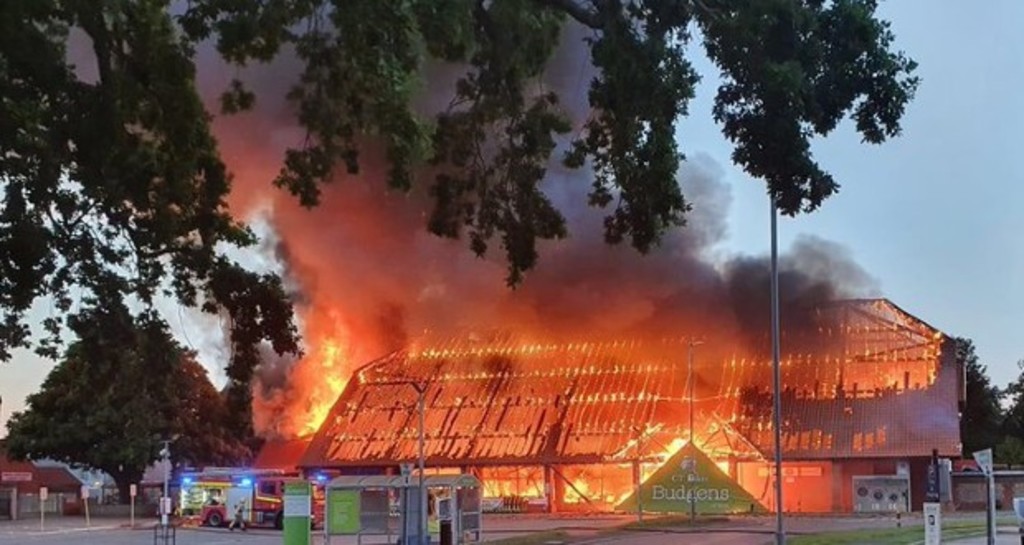 The building did not require sprinklers to satisfy Building Regulations as it was just under the 2,000 m2 threshold for retail premises. The Business Sprinkler Alliance (BSA) has responded: “Shouldn’t there be flexibility in the system to ensure that ‘critical’ buildings such as these can also be effectively protected from fire?”

On the evening of Saturday 20 June, more than 100 firefighters tackled the substantial night-time blaze. The Fire and Rescue Service prevented the fire from spreading to other buildings, but sadly the supermarket is beyond repair and will now have to be rebuilt. The smoke could be seen billowing from ten miles away.

Eight fire crews and 14 appliances were called to the fire at its height and, eventually, brought it under control. Local police urged people to keep away from the Kerridge Way store as crowds gathered in the car park and neighbouring streets.

The business had served the local community for 35 years and was also home to the town’s only Post Office. It was also conducting hundreds of deliveries for people who were self-isolating during COVID-19. For Budgens, this will cause loss of earnings along with business disruption as the company’s store will have to be rebuilt and a temporary store erected in the meantime. For their part, staff will need to be redeployed.

In contrast, a bakery oven fire at a Sainsbury’s in Altrincham in December 2018 had a very different outcome, with an automatic sprinkler system activating and extinguishing the fire prior to the arrival of the Fire and Rescue Service. The store re-opened three hours after the fire started with damage limited to less than £500. This figure is minuscule when compared to the substantial cost of re-building the Budgens supermarket, the loss of business incurred and the impact on the local community.

The BSA has commented: “When we protect property and halt the spread of fire, we not only protect lives, but we also protect businesses and jobs. A properly-controlled fire can be the difference between a building requiring renovation or demolition.”

The organisation continued: “Whether through a greater ability to emphasise the criticality of a property through local powers or an improved national regime, we need to ensure that large and ‘critical’ buildings are protected. The Holt Budgens is an almost perfect example of a building the community can ill afford to lose. Likewise, it could be a school, a medical centre, a hospital or a sports centre. In each case, the loss would have a large impact.”

In conclusion, the BSA observed: “The fire in Holt reminds us all of the innumerable impacts a fire can have on a local community. While sprinklers are not required in all buildings, a focus on property protection in the Building Regulations would mean that sprinklers would be installed in new buildings where there’s the possibility of a large loss of life and where firefighter safety is likely to be compromised and where the loss of a building would impose significant negative impacts and costs on a local community and/or on the public purse because of the loss of a public service facility, the loss of a workplace or due to any significant loss of residential accommodation.”

The contrast between two buildings with and without a sprinkler system in a fire can be quite stark. In the event of fire, many businesses with sprinkler systems suffer a minor interruption and find they’re back up-and-running in a matter of hours. Those without can see five-to-six times the damage and suffer longer spells of interruption.

According to the BSA, sprinkler systems make buildings and businesses resilient to fire incidents because they control or extinguish a blaze before the Fire and Rescue Service arrives on scene. The impacted business can be operational within hours, thereby avoiding the economic and social costs.