THE WINNERS of the inaugural Safety and Health Excellence (SHE) Awards have been announced during a gala dinner at the Vox, Birmingham. 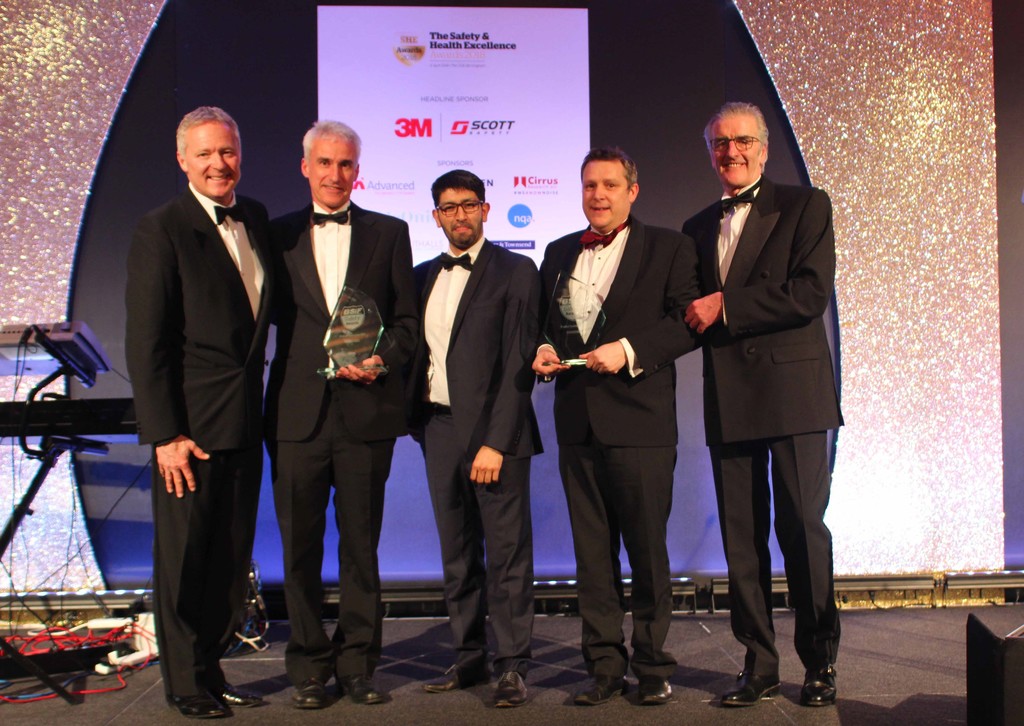 The ceremony, sponsored by 3M, was hosted by Rory Bremner on 11th April at The VOX, Birmingham and saw an attendance of over 420 professionals from the safety, fire safety, security and facilities industries.

The winners were chosen by an esteemed panel of key industry figures who whittled down more than 150 entries to a shortlist of 75 entries across nine categories.

The categories aim to cover all aspects of health and safety, fire safety and security and incorporates the long-standing British Safety Industry Federation (BSIF) Awards.

Fire Innovation of the Year award (sponsored by Turner & Townsend) was won by Coltraco Ultrasonics with runners up Apollo Fire Detectors being selected Highly Commended and Detectortesters awarded the Commended prize.

Wireless CCTV won Security Innovation of the Year with Pick Protection and Texecom being selected as Highly Commended and Commended respectively.

British Woodwork Federation were presented with the award for Campaign of the Year for their work on Fire Door Safety Week. Highly Commended was awarded to Edinburgh Airport and Commend to UK Asbestos Training.

But it wasn’t just businesses that celebrated success, Alexandra Roberts from Mid-West Wales Fire and Rescue Service was awarded Rising Star of the Year and Terry Edwards from Bedfordshire NHS Trust took home the Health & Safety Manager of the Year (sponsored by NQA).

Finally, the most prestigious award of the evening, the Lifetime Achievement Award was given to Lawrence Waterman OBE, who is managing partner at the Park Health and Safety Partnership, and was formerly head of health and safety for the London Olympic Delivery Authority and the past president of IOSH.

In addition, the BSIF Awards, which were judged live at The Health and Safety Event on 10-11 April 2018 at NEC Birmingham, were also announced during the ceremony. Guardsman Ltd were awarded the BSIF Customer Service Award, the BSIF Product Innovation Award being won by Eave Intelligent Ear Defenders, and the BSIF Safety Solution Award to Green Gate Access Systems.

You can see pictures from the night overleaf and we can confirm that the SHE Awards 2019 will return to The VOX, Birmingham on 10 April. Entries will be welcomed from October 2018. For more information on the SHE Awards, visit www.she-awards.co.u