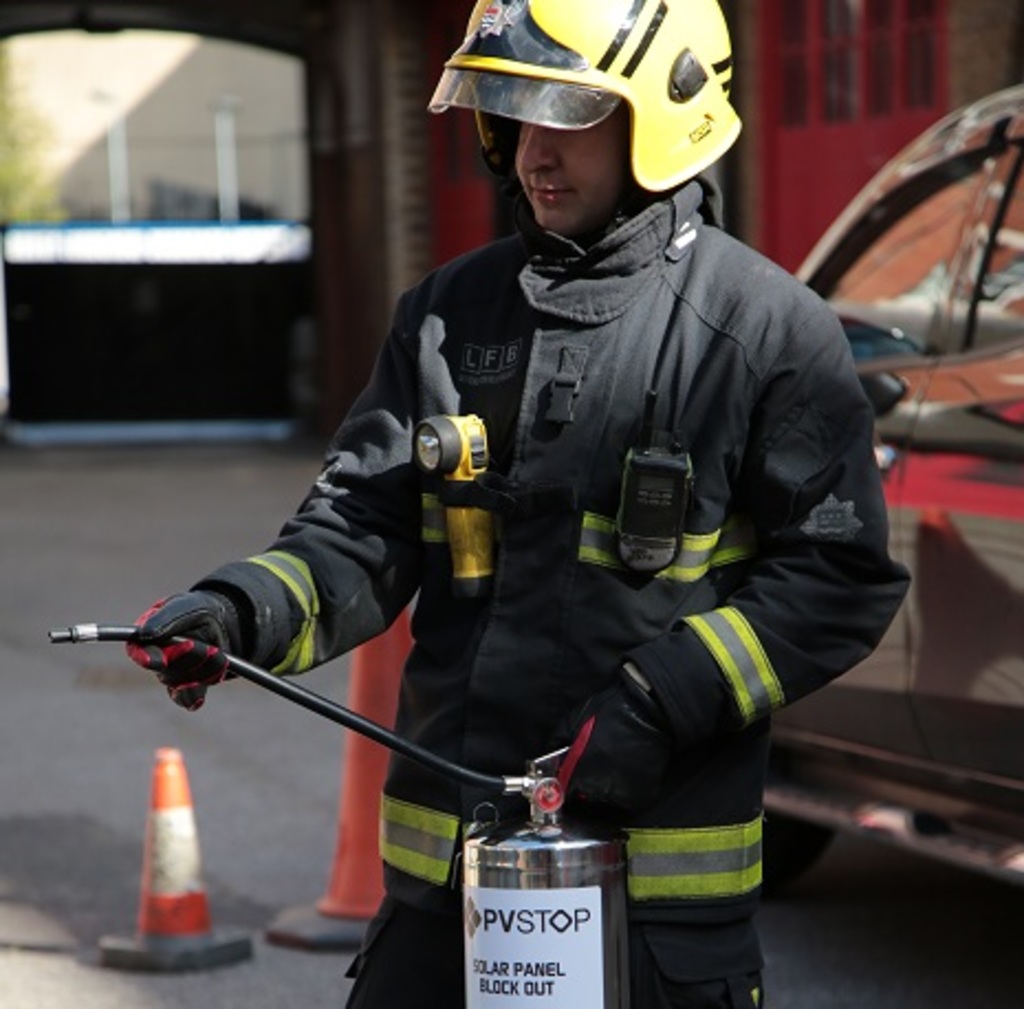 Incidents such as fire, floods and collapsed buildings, involving solar panels, are especially dangerous as it’s very difficult to isolate the electrical current they generate if they are damaged or involved in a fire. When tackling fire involving solar panels, crews run the risk of receiving electric shocks as the current can travel down water jets and hoses.

PVStop, is a black liquid polymer coating designed to cover solar panels like a liquid tarpaulin. Stored in an extinguisher, it’s sprayed onto solar panels, or from the head of one of the Brigade’s aerial appliances which are often used in high-rise fires and for aerial water dousing.

There are almost a million solar panel installations in the UK. PVStop works by blocking the sunlight that powers solar panels, so the process of converting light into electricity is stopped.  The panels are then de-energised and the risk of electrocution is greatly reduced so crews can get closer and prevent fire spreading from a roof to the rest of the building.

The environmentally-friendly and non-toxic solution is being distributed to all eleven of the Brigade’s aerial appliances.

Fire crews in London have been called to seven fires involving solar panels this year with just over 55 fire incidents recorded in the UK since records began.

PV Stop can be sprayed on to both wet and dry panels that are alight, or arcing. Once discharged, the coating solidifies and becomes water resistant and waterproof in minutes.  Waterproofing ensures it doesn’t get washed away by water from hoses when extinguishing a fire.  After an incident is resolved the coating can be peeled off the solar panels without damaging the panels.

LFB group manager for operational policy Tom Goodall said: “It’s exciting to be the first fire Brigade in in the world to trial this new technology. We are always looking for new ways to keep London safe.

“As people become more aware of the benefits of using green energy, this solution is a welcome addition to our resources.  As well as fires there are also dangers during freak weather conditions where hail, lightening and heavy rainfall can damage panels.

"Damaged solar panels on a rooftop can increase the risk of electrocution to firefighters and members of the public. For example, firefighters pitching a metal ladder to a roof may come into contact with a live current from solar panels. We need to react quickly at incidents and this helps us to quickly manage and reduce the hazards presented by solar panels.”

After each use of PVStop the Brigade’s fire crews will be provide feedback. If it proves effective and practical for operational use, the Brigade will be looking to include it as a permanent firefighting resource.