HERE IN the UK, electric buses are driving the charge towards sustainable public transport. However, the use of such vehicles realises a new danger that must be planned for and mitigated. James Mountain focuses on the fire risk posed by Lithium-ion batteries. 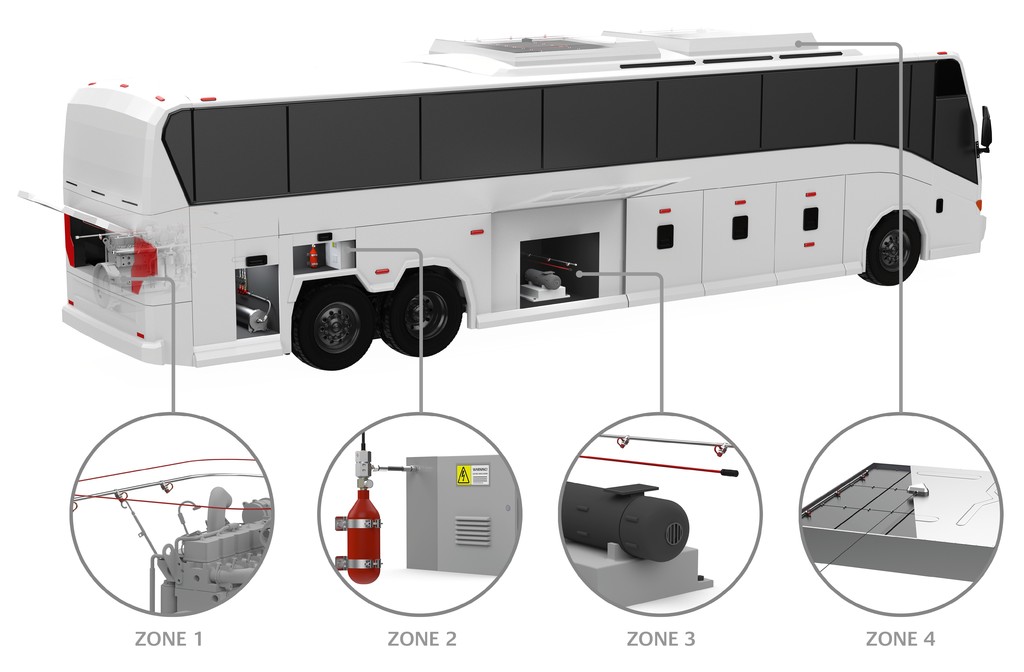 In step with the worldwide shift towards a more sustainable future, the UK’s electric bus fleet is set to be the largest in Europe by 2024-2025. Indeed, the number of such buses on the road is predicted to grow by almost 180%.

The technology supporting such a move is the Lithium-ion (Li-ion) battery, but this more sustainable fuel source does serve to create new fire safety risks. Should Li-ion batteries be impacted, for example, through overvoltage, overcharging, mechanical failure or physical damage, the fire safety consequences can be substantial.

Traditional fire suppression systems will only be so effective in protecting electric buses and coaches as a result of the unique risks the latter can realise. These new risks are also presented without new regulations. Let’s explore those risks and analyse how fleet managers, OEMs and bus operators might go about actively reducing them.

Major cities – including London – are swiftly paving the way for electric bus adoption. Other cities across England and Scotland continue to implement low-emission zones in a bid to reduce air pollution and improve public health. This movement is inevitably impacting the use of not only buses, but also HGVs, taxis and private vehicles.

As a result, electric bus adoption is set to increase exponentially and make it difficult for safety requirements and regulation to keep pace.

The Li-ion batteries powering electric buses and coaches are widely considered to be a safer alternative to traditional combustion engines, both in terms of their environmental sustainability and the likelihood of ignition.

Although electric buses and coaches are less likely to catch fire than their traditional combustion engine cousins, when they do the consequences are potentially much more severe for bus fleets and passengers.

For example, last year alone there were multiple incidents in Germany and China of electric buses being destroyed while charging. Effectively controlling and mitigating the risk is clearly vital.

Most commonly, fire risk arises in Li-ion batteries when they suffer from a defect of some kind. This can be caused by exposure to excessive heat, mechanical failure, overcharging or physical damage, for example. In turn, these defects will trigger an internal short circuit within the battery cells, causing them to produce excess heat. This creates a chemical reaction within the cells, leading the battery into a state of what’s known as ‘thermal runaway’.

When in thermal runaway, the excess heat within the battery begins to produce more heat, leading to rapid rises in temperature. If not controlled quickly, this will lead to ignition, toxic gas emissions and, often, large explosions. Once a battery has entered thermal runaway, the rapid temperature increases can take just milliseconds, thereby rendering suppression an extremely challenging task.

At this point, the battery also has the ability to produce its own source of oxygen, propagating the flames from within. This makes suppression all the more difficult with traditional solutions as it becomes almost impossible to starve the fire of its oxygen source by using external protection methods.

As a result, the core aim of any fire suppression solution for tackling Li-ion battery fires should, in the first instance, be all about preventing the volatile state of thermal runaway from occurring.

Due to the origins of Li-ion battery fires – ie within the electrolytes of the battery – using plain water to combat them exacerbates the risk. Water can react dangerously with the batteries, causing them to produce toxic gases – such as carbon monoxide – that can realise extreme health problems for those nearby. The reaction of the water with the battery may also lead to greater risk of electrocution for those treating the fire as it acts as a conductor.

These risks are not limited to fully-electric vehicles. Hybrid engine buses, which are currently being used in bus training academies across the UK, are every bit as dangerous (if not more so). These vehicles are equipped with a Li-ion battery and a combustion engine, carrying the fire risks of both. This means any fire in these vehicles has the potential to inflict even more damage to the bus and passengers as it can cause a chain reaction between the two engines.

At present in the UK, there are no specific standards or regulations that address fire risk and its mitigation for electric buses. For traditional engine buses, fire suppression has been embraced by Transport for London for many years to increase the safety of vehicles and passengers. Even before the influx of electric buses, fire suppression on commercial vehicles has been slow.

Although standardised across Europe, this guidance relies on the individual OEM and fire suppression company’s judgement, which is not regulated beyond stipulating the necessity for ‘a suppression system’. The guidance makes no mention of the effectiveness of the system in vehicles’ individual operating environments.

Existing regulations are important when it comes to balancing the fire risks present in traditional combustion engine buses. However, they don’t effectively address the risks for electric buses and coaches. As a result, a change – or the addition of further regulation – is needed in order to keep in step with the move towards sustainable vehicles.

The extreme fire safety risks posed by Li-ion batteries – combined with the lack of safety regulations and the anticipated exponential increase in adoption of electric buses and coaches here in the UK – means a deeper understanding from OEMs and bus operators is necessary for implementing effective measures and ensuring safety. There are several areas on which to focus attention, including battery charging, storage and suppression.

Overnight charging is a huge risk for electric vehicles. Prolonged charging can cause small battery components to build up and store significant amounts of energy, increasing the likelihood of overheating and thermal runaway. To minimise this risk, charging stations should be monitored at all times during use. Once fully charged, buses should be disconnected from charging points.

In order to minimise damage in the event that a fire does take place, parking and storage locations for electric vehicles should be subject to additional risk assessments addressing factors such as proximity to other vehicles or combustible materials. Damage that was caused during the operating day may not reveal itself until the bus is stored overnight. Parking and storage areas should be monitored at all times to ensure that the risks are addressed and mitigated as soon as they arise.

A European Union-funded research initiative involving the Research Institutes of Sweden and Dafo Vehicle Fire Protection has determined that a combination of detecting defects early on and ‘spot cooling’ are the most effective ways in which to counteract the unwanted prospect of thermal runaway in Li-ion batteries.

Study results show that, if a defect within a Li-ion battery is detected early enough, thermal runaway can be reversed before it has the ability to take hold. Combined with a specific suppression agent designed to handle battery fires and associated risks, this will prevent those risks from being exacerbated during suppression.

Indeed, this extensive research has resulted in a new battery suppression solution from Dafo Vehicle Fire Protection – namely Li-IonFire – which is specifically designed to address the fire safety risks associated with electric vehicles and machinery.