POLICE PAY will rise by 2.5% in 2020 to 2021, providing officers with an increase above inflation for the second year running. The pay award matches the 2.5% rise awarded last year, which gave forces the largest pay increase since 2010. 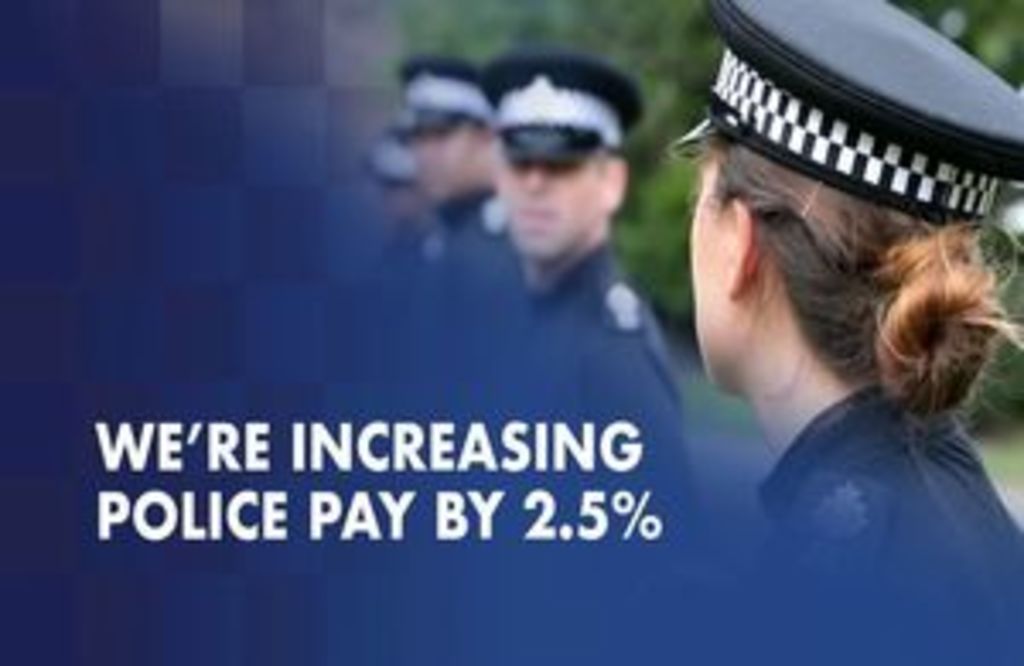 Policing continues to be an attractive career, with the numbers of people joining the police service having reached a ten-year high. Between last October and May this year, more than 78,000 people applied to forces as the Government makes good on its pledge to put 20,000 additional officers on the streets in three years.

Speaking about the pay award, Home Secretary Priti Patel (pictured, right) said: “When I became Home Secretary, I promised to give our police the funding, powers and resources they need to keep us safe.

We’re recruiting 20,000 additional officers in the next three years and more than 3,000 have already joined. The policing system has received its biggest funding boost for a decade, and now we’re also increasing police pay by 2.5%. This Government is backing the police and, as Home Secretary, I will do everything in my power to ensure our police are fully supported.”

The Police Remuneration Review Body, an independent Board set up by the Home Office to make recommendations on pay, took evidence from across the policing sector and the Government. It recommended a 2.5% rise for 2020 to 2021 based on a variety of factors, including affordability, recruitment and retention, which the Government accepted in full.

The pay rise follows on from several announcements designed to support and protect the police.

Earlier this month, the Government launched a targeted consultation for doubling the maximum sentence for assaults on emergency workers to two years. The Home Secretary has also set out plans for a Police Covenant focusing on physical protection, health and well-being and support for families.

The National Police Well-Being Service, launched in April last year, also continues to be funded by the Government to provide support direct to officers and staff.

The National Police Chiefs’ Council (NPCC) has welcomed the Government’s announcement, with the 2.5% pay rise for police officers taking effect from September and also signalling the withdrawal of the lowest pay band for a sergeant.

Chief constable Matt Jukes, the NPCC’s lead for pay and conditions, stated: “The commitment of our officers to keeping our communities safe every day, not least during the recent challenging period, rightly deserves recognition. Given these difficult financial times, it’s very welcome news that the Government has accepted the Police Remuneration Review Body’s recommendation for an increase in police pay above the rate of inflation. Chief constables welcome the endorsement of our proposals on targeted variable pay and sergeants’ pay. Taken together, this will contribute to ensuring specific roles in the service are filled and to supporting the ongoing recruitment of officers.”

The Police Federation of England and Wales has referred to the 2.5% pay award for police officers as “a step in the right direction”. National chair John Apter (pictured, right) observed: “In the current financial climate with so much uncertainty, the fact that the Government has fully accepted the recommendations of the Police Remuneration Review Body will come as a relief. The 2.5% increase in pay across all ranks is a step in the right direction and, while it’s less than we asked for, will be broadly welcomed against a backdrop of financial pressures on the economy. Do my colleagues deserve more? Absolutely, and the Government must go further to pay officers fairly for the unique and dangerous job they do. However, with the economic vulnerability we face as a country, many colleagues will be relieved to receive a 2.5% pay increase. Anything lower than that would have been completely unacceptable.”

The pay rise equates to around an extra £1,100 of pensionable salary per year for a constable.

Apter continued: “This isn’t as much as we asked for, but it’s more than many of our colleagues expected. It’s also positive to see the Government abiding by proper process and accepting all the recommendations of the Police Remuneration Review Body. This hasn’t always been the case. We will continue to fight for our members to receive the pay they deserve following a real-terms cut of 18% during the last decade, the effects of which have taken their toll.”

As well as the pay rise, which is applicable across all ranks, the Government has announced that the London Weighting and the Dog Handlers’ Allowance will increase by 2.5%. The maximum rate of London Allowance is set to increase by £1,000 to £5,338 per annum for officers appointed on or after 1 September 1994 and not receiving a Replacement Allowance.

A review of the role of Police and Crime Commissioners (PCCs) will help give the public a greater say over policing, the Home Secretary has announced.

PCCs are directly elected to be the voice of the people and deliver an effective and efficient police force in their area. They’re responsible for the budget and performance of their force, including cutting crime.

The review delivers on the Conservative Part’s Manifesto commitment to strengthen and expand the role of PCCs. The public wants to see a reduction in crime and PCCs are elected to deliver on the people’s priorities.

Measures to be considered in the review include raising the profile of PCCs, giving the public better access to information about the performance of their PCC, sharing Best Practice so that PCCs are delivering consistently across the country and considering the relationship between PCCs and chief constables.

Eight years on from their introduction back in 2012, it’s right that the Government assesses ways in which to ensure the public can better hold PCCs to account for bringing crime down and protecting citizens in their area.

Priti Patel stated: “The British people want to know the police will uphold the law and then be held to account on that basis. This review will help to improve accountability, scrutiny and transparency, ensuring Police and Crime Commissioners always put the law-abiding silent majority who voted for them at the centre of their decision-making.”

Kit Malthouse, Minister for Crime and Policing, added: “We are committed to giving the police the powers and resources they need. It’s why we’re recruiting an additional 20,000 officers and are giving the biggest funding increase to policing in a decade. This review will help PCCs to deliver effective police forces who can cut crime and protect their communities. It will also ensure voters can hold PCCs accountable for their performance, thereby giving the public a stronger voice in matters of crime and justice.”

The review will take place in two parts. The first stage, to be conducted over the summer, will look at raising standards and improving accountability such that all members of the public are receiving a good service from their PCCs. It will also consider ways to strengthen the accountability of Fire and Rescue Services in line with the Government’s long-term ambitions on fire governance reform.

The review’s second stage will take place following the PCC elections in May 2021 and focus on longer-term reform. This will include looking at what extra powers PCCs need to better fight crime in their areas. Longer-term plans, including increasing the number of mayors with responsibility for policing, will be detailed in the Local Recovery and Devolution White Paper which is intended for publication in the autumn.

The Policing and Crime Act 2017 enabled PCCs to take on responsibility for governance of their local Fire and Rescue Service. There are currently four Police, Fire and Crime Commissioners operating in England and Wales.